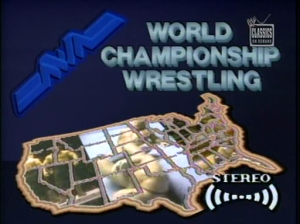 From last week in Charlotte: Barry Windham, Nikita Koloff, Jimmy Garvin, and the Rock N Roll Express are helping somebody into the back of a Mercedes as they take him off to the hospital. Maybe Tony can explain.

Your host is Tony Schiavone. Oh, the Midnight Express did something bad to Ronnie Garvin.

Scrappy McGowan is *your* referee for the duration of the program.

Boogie Woogie Man flirts with Tony while he’s beating up Thunderfoot #2. Yes, flirts. It’s all Jimmy Valiant as he connects with the RUNNING ELBOW DROP for the win at ironically 4:20.

Over to the podium, Jimmy Valiant says he’s going to hibernate in Gainesville Georgia for three or four days and then start working out and find himself a partner to win the Crockett Cup. When his team wins the million bucks, he’s giving his share to all these public organizations that name themselves with letters. Yeah you don’t look like you’ve made too many good decisions in your life. Why start now?

Paul Jones and Ragin N Rude are out. Jones is interested to see all the teams that will be entering the Crockett Cup. He feels pretty positive that his boys will be the #1 seed. The Road Warriors won it last year and the Rock N Roll Express have a good chance of winning the tournament. After the RNR Express meet the tag champs in a cage match, the chances of Morton and Gibson winning anything are plenty slim to none. Ragin N Rude are TOTALLY, TOTALLY AWESOME, says Manny.

After BA works the arm for a while, he blasts Stevens with a clothesline and hits the RUSSIAN LEGSWEEP for the win at 6:07.

Out come the Rock N Roll Express to hype up just how despicable Jim Cornette and the Midnight Express are for what they did to Ronnie Garvin. If the Garvins ever need two extra men to chase them all back to Louisville Kentucky, the RNR Express are there for them. Not only does Morton say they will win the Crockett Cup, but he’s excited about meeting Ragin N Rude in the cage to regain their world tag belts. It’s only a matter of time before they win them back.

And now to finally see just what the heck Jim Cornette did to Ronnie Garvin. Flashback to NWA Pro from February 14 during the NWA US tag team titles match between Barry Windham & Ronnie Garvin defending against the Midnight Express with Jim Cornette and Big Bubba Rogers at ringside. They show the final three minutes of the match with Ronnie Garvin getting the hot tag. He nails Condrey with his HANDS OF STONE and goes for the pin. Eaton runs in and breaks up the pin with an elbow drop. Meanwhile, Windham and Eaton brawl to the floor and wipe out the ref in the process. Cornette jumps in the ring and throws a FIRE BALL in Ronnie’s face! The ref manages to see this horrible deed done to Garvin and calls for the bell. The RNR Express, Bullet Bob, Rickie Lee Jones, and then Jimmy Garvin runs down with a cold compress to put over Garvin’s head. This was the beginning of the Garvin brothers in JCP and the big babyface turn for Jimmy.

After the break, Bullet Bob and Brad Armstrong speak for Ronnie Garvin saying that Jim Cornette is going to wish he had burned Garvin’s legs off, because now he’s just going to come running for you.

They show more of what we saw at the beginning of the program with Jimmy Garvin and others taking Ronnie Garvin to the hospital.

Back in the studio, Gorgeous Jimmy Garvin cuts a humbling promo about being there for his brother. This experience changed him to see the error of his ways and now he’s vowing vengeance on Jim Cornette and the Midnight Express.

Recently, Dick Murdoch has turned HEEL by stabbing Dusty Rhodes in the back. He is giving it to this crowd as they even have to bleep out whatever angry Texas gibberish he’s saying. As this squash needed to be, Murdoch gets ROUGH with these boys. Petrov hits the RUSSIAN SICKLE on Sullivan to set up Murdoch’s ELBOW DROP, which seemed tame in comparison at 4:02.

After spending some time traveling with Ivan Koloff and Vladimir Petrov, Dick Murdoch has found that the Russian way of life isn’t so bad. Dang, Murdoch is YELLING like a crazy person. He calls out Dusty Rhodes and tells the RNR Express to stay out of his business.

We go to commercial right after the bell. When we come back, Rude holds up Nelson for the FLYING BURRITO off the second rope from Fernandez. That’ll do at 1:04 shown. They try to beat up the two jobbers some more, but the RNR Express make the save with DOUBLE DROPKICKS for both men!

JJ Dillon introduces Ole Anderson as the senior member of the Four Horsemen. He gives us a rundown of the history of the group dating back to the days of Gene Anderson. When Gene got hurt, they brought in Tully Blanchard. Lex Luger wants to be a Horsemen, but there’s only *Four* Horsemen pal.

Pretty bland hammerlock squash. O’CONNOR ROLL gets the win for Horner at 4:00.

The SUPER POWERS are here! Nikita Koloff says nobody likes Dick Murdoch in his own hometown anymore. If he and Ivan want to take him out, just bring it. Dusty Rhodes seems like he’s on something today. He wishes nothing but pain blues and agony for the Russians and Murdoch.

JJ Dillon brought out Ole Anderson earlier and now he’s got Lex Luger with him. WASSUPWIDAT? Lex Luger just talks about himself and how great he is and that he’s the athlete of the future.

BIG BUBBA SLAM! He pins Glover with his foot! It’s over in 46 seconds.

The Midnight Express have the US tag belts with them. Apparently they stole them after that match with Windham and Garvin. Jim Crockett Jr announces that Jim Cornette has been suspended from TV and all arenas. Condrey says they can’t help that Garvin was hit by a cosmic fireball. HA! Every day they don’t give Crockett the US tag belts, the Midnight Express will be fined $1000. WHOA! Bobby walks over and grabs Crockett by the suit and tries to intimidate him. They get fined for that too. Condrey yells at Crockett and tells him that Cornette’s mom will buy and sell Jim Crockett Promotions. One last piece of news from Crockett – Mr. Cornette signed a blank contract weeks ago and since the fireball incident, Ronnie Garvin has signed the contract as well. We’ll now be seeing a cage match with Ronnie Garvin taking on Jim Cornette. AWESOME.

And now to Ronnie Garvin’s post-fireball interview. That’s an awfully good makeup job. He thanks his brother Jimmy Garvin for helping him out and while Jimmy may be the spoiled brat of the family, blood is thicker than anything else. Even if he loses his sight in that one eye, he can still wrestle and will get his revenge on Jim Cornette.

Zane Smith gets the ROCKET LAUNCHER while Mulkey takes the BREAKDOWN from Condrey fifteen years before Chris Jericho was doing it. Eaton and Condrey both get the pin in 37 seconds.

Mike Rotunda returns to World Championship Wrestling. He’s here to hang out with his friends Barry Windham, Dusty Rhodes, and Jimmy Valiant. He’s sickened by the Midnight Express and Jim Cornette, but he knows Ronnie Garvin will be back.

Pretty cheap match as they are just bringing Denny Brown and the title back to put over Lazor-Tron. Rocky King (who resembles Jay Lethal here) controls the majority of the match with an armbar. Brown comes back with a butterfly suplex for two. Running knee drop gets two. Rocky King mounts a comeback and O’Connor rolls Brown, but Brown rolls through and hooks the tights for the cheap 1-2-3 at 7:01.

Superstar Bill Dundee gets excited for when the NWA comes to Memphis where he’ll be taking on Dusty Rhodes.

Someone yells out ‘gremlin’ directed at Raschke. Hilarious. The CLAW gets the three-count at 1:58.

The NWA World TV champ Tully Blanchard and JJ Dillon meet with Tony Schiavone. He puts over Lex Luger for benching 660 today. Eat your heart out, Road Warriors. He also downs Ronnie Garvin for acting like a victim. THIS IS A MAN’S SPORT! If you can’t handle it, go back to wherever you came from.

Tony says we are seeing history as this is the first eight man tag ever on the program. Somehow that seems hard to believe. Arn gets slammed into the corner of the JTTS and he’s punched around. VINTAGE ARN ANDERSON! Ricky Lee tries a flying headscissors and that always fails with the Horsemen. Armstrong and Mantel do alright, but Eddie Roberts as the weakest link gets stuck in the Horsemen corner. AA hits the SPINEBUSTER on Roberts and Ole drops the flying knee on his elbow when its extended. STEPOVER ARMBAR ends Roberts at 4:52.

And Tony Schiavone wraps up the show as the credits roll. PHIL NIEKRO’s KID worked for the NWA? That son of a knuckleball. There’s Terri Boatright (better known as Terri Runnels) doing the makeup. Neat!