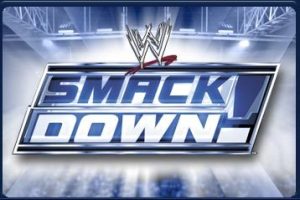 Chris Jericho comes out and complains that the World Heavyweight title should only be defended against Smackdown wrestler. Randy Orton should NOT be allowed a title shot because he is exclusive on Raw. Jericho still has not received the title rematch that he is entitled to because Smackdown GM Teddy Long is the most incompetent buffoon who has ever held a position of power. At least he didn’t say baboon. That might be racist. Jericho demands Teddy Long put in his letter of resignation and then makes sure that Jericho gets the winner of Swagger-Orton right after the match is over at Extreme Rules. DO YOU UNDERSTAND WHAT HE IS SAYING TO YOU? Edge interrupts wearing some silly aviators. Edge says Jericho makes some good points, but since Edge is always SPEARING him, he’s in no condition to beat Orton or Swagger. However, Edge says he knows he can beat Swagger or Orton. He threatens to spear Jericho again (geez, it’s always the spear with this guy!) when Smackdown GM Teddy ‘HOLLA-HOLLA-HOLLA’ Long comes out. Teddy says he doesn’t appreciate Jericho hating on him, playa. Jericho responds saying that if Teddy would do his job, then he wouldn’t have to be hating on him, playa. Long story short, Teddy Long gives Jericho his world title rematch for tonight and then adds Edge into the mix for a triple-threat match in the main event.

Who is betting McIntyre will be the next Honky Tonk Man? It’ll be 2011 before he loses that IC title. McIntyre says he knows everybody hates him and says that he hates everybody just as much. Well these people probably hate you because you’re Scottish. Kane controls early with a headlock, but McIntyre shoves him off and catches him with a big boot. Reverse neckbreaker across the knee gets two. Kane comes back with a big boot of his own and hits the Side Slam. Flying Clothesline sets up the CHOKESLAM, but McIntyre sees it coming and heads to the floor. Matt Hardy runs in and throws McIntyre back inside the ring to prevent the countout, but the ref calls for the bell and gives McIntyre the win as a result of a DQ. (3:10) Kane CHOKESLAMS McIntyre and CHOKESLAMS Hardy when he realizes he just cost him a victory. Whoops. ¾*

In the back, Jack Swagger goes up to Teddy Long and tells him that this is the most unfair decision he has ever made. He would have wrote what he said in all caps though because he was MAD. Teddy says as long as Jack Swagger holds that world heavyweight title, he’s going to have to deal with Teddy Long, JACK.

Ziggler publicly apologizes for choking out Josh Matthews last week, but R-Truth’s lie detector is going off like CRAZY! Nothing match. R-Truth fights back against Ziggler and misses the LIE DETECTOR (jumping spinning forearm smash). Ziggler grabs the SLEEPER and it’s all over. (2:11) I like that Ziggler is bringing the sleeper back. It turns him into that wild card that nobody expects to win big matches. ½*

McCool shoves out of a tie-up and shows she can do MAN push-ups. Mickie James does the same and then dropkicks McCool in the face. McCool avoids the Tornado DDT and sends Mickie into the ringpost. Layla gets a close up shot with her arm around Vickie. YAY! More of those please, but preferably without Vickie. Meanwhile, McCool grabs a headscissors and then turns Mickie over and bounces her head off the mat a few times. McCool uses the ropes right in front of the ref and breaks because SHE wants to. Mickie comes back with a Mick-A-Rana out of the corner. McCool starts to bail, but Mickie follows her out and throws her into the barricade. Thesz Press to McCool! Thesz Press to Layla! Back inside, Mickie delivers a reverse neckbreaker and Layla gets up on the apron to bring her off the cover. Once she’s taken care of Layla, Mickie turns back around into a big boot for the 1-2-3. (4:21) To prevent any post-match shenanigans, Beth Phoenix runs out and chases Team LayCool and Vickie into the crowd. Not a bad match. I’m actually looking forward to Phoenix-McCool. *½

The Miz joins us for commentary to tell everybody to watch Monday Night Raw to see Bret Hart proclaim that ShowMiz is the greatest tag team in the history of WWE. Gallows and DH Smith start the match. Smith delivers a powerslam and takes Gallows down with a drop toe hold while Kidd and Mysterio dropkick Gallows from both sides! Nice. Punk tags in and gets lifted up into a double suplex by the Hart Dynasty while Mysterio flies in with a springboard senton! Awesome. Cover gets two. Punk yanks Mysterio into the corner to slow him down. He stomps him down in the corner, but Mysterio comes back with a wheelbarrow bulldog. Punk slides out to the floor to avoid the 6-1-9. Commercials! We return to see Young in a collar and elbow tie up with Mysterio. He gets stuck in the Hart Dynasty corner, but pushes Tyson Kidd back into the corner of the Straight Edge Society. Tag to Gallows, he blocks a springboard with a big boot for two. The Straight Edge Society keep Tyson Kidd for a while. Darren Young misses a flying legdrop, but Punk still cuts off the tag by running Mysterio off the apron. Once Punk turns around, he eats a spin kick as Tyson Kidd makes the HOT TAG TO DH! Punk gets an O’Connor on Smith, but the man rolls through and gets two. Gallows comes off the apron as DH Smith goes after him, but fails to see Tyson Kidd running down the apron with a CANNONBALLLL to wipe him out! As DH turns around, Punk kicks him in the head for 1-2-NO! Punk misses a corner charge and takes the 6-1-9 as Mysterio swings around the ringpost! That stuns Punk as Smith lifts him up for the RUNNING POWERSLAM for the 1-2-3! (10:02 shown) Great six man tag match, I must say. ***¼

Meanwhile, Wade Barrett basks in the glory of Chris Jericho.

What’s up with JTG looking like Katt Williams and Shad looking like Karl Malone lately? Shad comes out to get a closer look. Croft controls to start with a neckbreaker and a back suplex. JTG comes back with a neckbreaker of his own. He tries the Mug Shot, but Croft pushes him off and hits a reverse neckbreaker for 1-2-NO! So much for that, JTG deliver the SHOUT OUT for the 1-2-3. (3:15) And once again, Shad drills JTG when he’s not expecting it for the third week in a row. Shad misses a corner charge and takes the Mug Shot. A dropkick sends Shad to the floor. Uh oh, black-on-black cryme! *

Edge explains to Josh Matthews the rules of a triple threat match for some reason. He’s walking out with the gold tonight and now Josh feels pretty confident about Edge.

For those of you who can’t afford cable, it’s time to see what you missed on Raw!

Champ enters first, but what does that mean anymore. They give us the big match introductions and everything to enhance the drama. They all meet in Edge’s corner as Jericho tries to sneak a roll up on Swagger for two. Swagger makes him pay with a belly to belly suplex. Edge tosses out Swagger and gets nailed from behind by Jericho. Jericho misses the Bossman straddle and Swagger trips up Edge so Jericho can catapult him into the bottom rope. The 2-on-1 beatdown continues as Edge backdrops them both one at a time to the floor. Edge meets them both with a baseball slide and sends them into the barricade. Swagger tries to suplex Jericho back inside, but Edge pulls Jericho off the apron which hotshots Swagger! Commercials! AND WE’RE BACK! Edge misses a corner charge and gets rolled up for two while Jericho lays out on the floor clutching his chin. Backbreaker by Swagger gets two. Pump splash gets two. Edge heads to the floor, but Swagger follows him out and gets his head slammed on the announce table. Jericho ambushes Edge with a punch to the face and the crowd approves. Back in, Jericho gives Edge the back suplex for two. Jericho misses a corner charge and Edge slips out of a powerslam from Swagger. He hits him in the back of the head and tosses Swagger into Jericho. DOUBLE FLYING CLOTHESLINE by Edge! He continues to beat them both down. Swagger gets launched off the apron onto the announce table, but then Jericho schoolboys Edge for 1-2-NO! Lionsault fails and Edge hits the Edge-O-Matic for 1-2-NO! Edge runs into a boot in the corner, but shoves off the bulldog as Jericho takes the nasty Bobby Eaton corner bump. Edge is thinking SPEAR, but Jericho floats over into the WALLS OF JERICHO! Edge inches near the ropes, but Jericho pulls him to the center of the ring. Swagger tries to break it up so Jericho trips him up for the WALLS OF JERICHO! Once Edge regroups, he pulls Jericho off Swagger into the EDGECUTION! Now Swagger grabs Edge for the GUTWRENCH POWERBOMB, but Edge escapes and delivers the EDGECUTION to Swagger! SPEAR on Swagger? No! Jericho cuts him off at the pass and covers for 1-2-NO! Rolling Cradle by Swagger on Jericho gets 1-2-NO! As Jericho kicks out, he nails Swagger with the CODEBREAKER! Jericho tries to be ironic by giving Edge the SPEAR, but Edge leapfrogs over him and comes off the ropes for his own SPEAR! Cover, 1-2-NO! Swagger pulls Edge out and throws into the barricade. He jumps back inside the ring on top of Jericho for the 1-2-3 and retains his world title. (12:35 shown) Smart triple-threat match indeed. Everything was done well including the finish as Swagger was certainly the wild card in this match anyways and he WON it like he was the wild card. Good stuff and far be it for me to say, but I’m calling this Jack Swagger’s best match to date. ***½

And that’s the show, folks!