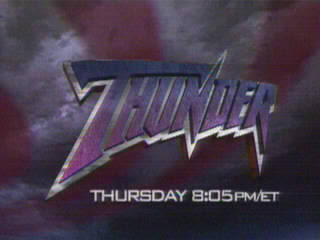 Last time on Nitro, DDP announced tonight’s main event on Thunder: he and Lex Luger will take on Kevin Nash and… Randy Savage!

Your hosts are Mike Tenay, Bobby Heenan, and Lee Marshall. Syxx is in the intro. WHAT. Still got the rock set going on though.

We go over the performance bond stuff from Nitro between Kevin Nash and the Giant. Tony Schiavone does interview duties tonight as he brings out the Giant for a word. Giant says he’s got a chokeslam waiting for Kevin Nash. Hey look, Lodi is walking around ringside with a “NASH RULZ GIANT DROOLS” sign. Giant pulls him into the ring for a CHOKESLAM. The rest of the Flock (except Raven) come after the Giant and he disposes of them one by one. Kevin Nash appears wearing some crazy zubaz, some Birkenstocks, and carrying a cup in his hand. He gets in Giant’s face just like on Monday night. When Giant walks away, Nash throws what may or may not be coffee in his face. With everything inside him, Giant manages to stop himself from touching Nash. Big Sexy will just not let up – and why should he?

More footage from Nitro is shown. This time concerning the Nash/Savage issues. We see what happened right after we went off the air as Savage slaps Nash across the face causing Nash to get away from Hollywood Hogan and chase after Savage to the locker room. Whoa!

WCW Saturday Night! Watch it – IF YOU WILL! 6:05PM eastern time! TBS! Rick & Scott Steiner, Diamond Dallas Page, Marty Jannetty, Public Enemy, and many more stars will be on the program. It’s the MUTHASHIP! Take it to the PAY WINDAH, baby!

Tenay mentions that WCW is considering forming a martial arts division contested under pro wrestling rules. This is the first we’re seeing on the Nitro/Thunder recaps of the reboot of the Cat Ernest Miller. Nagata shows more of his pro wrestling side here with suplexes, an Indian Deathlock, and a piledriver. All Miller can fight back with are kicks and strikes. While Nagata gets pulled away off a choke down in the corner by the ref, Cat flips up to the top rope and hits the FELINER for the upset three-count. (3:43) Sonny Oono tries kicking the Cat from behind, but Miller NO-SELLS and kicks Sonny to the floor. ¾*

JJ Dillon comes out as Tony Schiavone wants to find out what the status is on DDP. Dillon says there was a mugging and when he starts to give us more information, his mic goes dead. DDP comes out the tunnel walking with a crutch. He tells Dillon that he’s wrestling tonight – no matter what. JJ can’t let him do that because he might sue WCW. DDP isn’t that type of person and says he’ll sign whatever paper he needs to sign to be in tonight’s main event – so that he can take WCW OFF THE HOOK.

FLAIR versus HART – WHO IS THE BEST? WCW/nWo SOULED OUT – January 24!

Hall wears his half of the world tag belts he made and the actual half of the world tag belts around his well, upper body. It’s survey time. It’s pretty close, but Hall gives it to the good guys. He asks Spicolli who he is here to see and Spicolli puts over the nWo. Larry Zbyszko comes out to talk some sense into Spicolli. Hall tells Larry Z not to sing it and just bring it. Zbyszko walks through the ropes and takes off his jacket ready to go. Spicolli nails Larry Z from behind and holds him for Hall, but Larry Z ducks a charging Scott Hall and backdrops him to the floor. Spicolli is left to get kicked out to the floor by Larry Z. No match. Hall and Spicolli just lie there on the floor licking their wounds. Blah.

Winner of this match faces the cruiserweight champion at Souled Out. Jericho explains his actions against Rey Mysterio back on Nitro. That little man said some horrible things about him and his family! Being the role model he is, Jericho put Mysterio in his place. He hopes Rey regains the cruiserweight title tonight and says what happened will never – and trust him when he says this – EVER happen again. Jericho tries the handshake bit and Eddie gets RILED UP over it. He catches Jericho with a few dropkicks, but never really capitalizes. Jericho launches Eddie throat-first onto the top rope a few times. Eddie dropkicks the knee and chops Jericho up against the ropes. He applies an abdominal stretch and uses the ropes for added leverage. Jericho launches Guerrero again, but Guerrero counters a powerbomb and sunset flips him for 1-2-NO! Eddie stretches Jericho some more in a modified surfboard. He tries a Gory Special, but collapses and nearly KILLS Jericho as he almost drops him down on his neck. After some back and forth counters, Jericho blocks a nice looking hurracanrana into the LIONTAMER for the tapout. (4:29) Jericho doesn’t seem to know where he is right now. This had its moments, but too short to be a classic. **½

They replay the Flair-Neidhart-Hart angle from Monday Nitro.

Disco Inferno comes out to the ring instead of Goldberg. He and Chavo Jr. verbally spar over who sucks the most. Unfortunately, the video feed goes out and we don’t see what happens next due to thunderstorms in the Lakeland area.

Once again, they replay the Sting-Hogan confrontation from last week and proof of the world title vacancy.

Hollywood Hogan and Eric Bischoff head out for a promo. Hogan tries to convince us that there’s no trouble in the nWo. He’s sick of the lies and deception WCW keeps spewing. Apparently, the federal court ruled in the nWo’s favor. Hogan wants JJ Dillon to give him the belt back because now he’s legally obligated. Bischoff thinks everybody wants to see Hollywood have the belt back around his waist. Hogan talks about how he’s the man and he’s the reason why wrestling is the way it is today. When you’re nWo, you’re nWo 4-LIFE. When Hogan gets his belt back, you’ll never see Sting again. The nWo is just too sweet. Same old stuff. Lee Marshall points out how Hogan didn’t say anything new. No mention of Randy Savage or Kevin Nash at all either.

It’s a real romp ’em-stomp ’em start with tons of counters from both guys. Rey finally gets a tilt-a-whirl headscissors to put Juvi on the floor for a somersault plancha. Back inside, Juventud rolls through a springboard sunset flip and catapults Rey to the floor as it’s his turn to fly with a no-hands tope into a headbutt on Mysterio. CRAZY! Back in, Juvi hits a slingshot legdrop for two. He continues with the offense by delivering a Muscle Buster to Mysterio. But instead of dropping Rey’s neck to the mat, Juvi drops to his knees to make sure that Mysterio needs to see a chiropractor in the morning. Cover, 1-2-NO! More work on the neck as Juvi connects with a brainbuster. They fight to the apron where Mysterio while lying down, launches Juvi into the ringpost and then sends him crashing to the floor. That doesn’t stop Guerrera though as he comes from the inside out to the floor with a slingshot legdrop. Back in the ring, Juvi connects with a springboard missile dropkick. Mysterio comes back by tripping Juventud into the ropes. Juventud begs off, but then yanks Rey into the corner. Nice! Juvi takes too long celebrating and flashing his tongue Gene Simmons-style at the crowd. Rey fires back and hits a double-underhook faceplant for 1-2-NO! Rollup sequence leads to a powerbomb from Juventud, but Rey punches out and sits down on top. Juventud avoids Rey’s Tornado DDT by dumping him out to the apron. Juventud stops Rey up top, but he sends Juvi down to the mat the hard way. Flying Hurracanrana? Nope! Juvi counters with a powerbomb. 450 SPLASH misses. Juvi lands on his feet though, but Rey snaps off a hurracanrana just like that for 1-2-3! (9:48) Rey wins his third WCW Cruiserweight title. Great match that told a story, which doesn’t happen too often with Juventud Guerrera matches. ***½

DDP comes down to the ring, but he’s basically useless with a bad wheel. When the ref isn’t looking, Hogan takes his crutch and whacks DDP in the knee to keep him out of the match. Savage dumps out Luger for the flying double sledge. Back in, Savage refuses to tag out to Nash despite Hogan’s instructions. He finally does tag Nash, but it’s a hard slap to the hand. Savage goes back to choking Luger and gets tossed out by Nash! Hogan has to try and get Savage to stick with it here. The feed keeps going in and out. Hogan instructs Nash to tag out and Savage gets a slap across the face! Nash looks like he’s going to walk out on Savage too. During all that, Luger mounts his comeback and starts hitting Savage with clotheslines and the Bionic Forearm. Nash heads in and receives the Bionic Forearm as well. Hogan is in the ring and he goes straight into the TORTURE RACK for maybe five seconds. (3:32, I guess) TORTURE RACK on Nash! Savage comes off the top just as Luger drops Nash and wipes him out with the double sledge. Savage seems disappointed that he didn’t nail Nash. Hogan tells Savage to hold Lex up for him. Hogan comes off the ropes to wallop Luger, but Luger ducks and Savage takes the blow. Oh boy. They go nose to nose like it’s WrestleMania V. Here comes the Giant. Savage shoves Hogan back into the Giant for a CHOKESLAM. More feed problems. The rest of the nWo head down to beat up the Giant and Lex Luger. STING MAKES THE SAVE. The nWo quickly retreat to the floor as WCW reigns supreme as we close the show. What happened to DDP’s body? 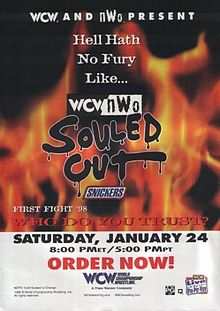 SNICKERS presents WCW/nWo Souled Out LIVE ON PPV on January 24 from Dayton, Ohio.