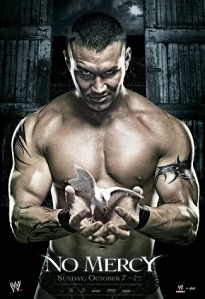 Vince McMahon and William Regal come out to announce that John Cena isn’t going to be wrestling tonight in case you missed TV this week. Chicago actually *cheers* that he’s not able to compete. Vince guarantees history will be made though. Crowd chants for “Y2J”. Instead, Vince just hands the title over to Randy Orton. Regal says Orton has to defend the title, but he’s letting Orton choose who he faces because he’s the champ. Orton gives a lengthy acceptance speech, which is interrupted by Triple H. He insults Vince’s grapefruits and Vince makes him pay for his show of disrespect by giving him a WWE title shot. WHAT. That match is – NEXT!

Funny how this feud flopped three years earlier with the roles reversed, but now it seems fresh again. It shows you how far Orton has come since then. Orton attacks from behind, but Hunter comes back with the High Knee. Orton powerslams him to come back and puts the boots to HHH. Hunter clotheslines Orton and delivers a superplex for two. Orton charges into a AA spinebuster for 1-2-NO! They brawl around ringside, and Orton hits his DDT through the ropes. They tease finishers and continue on. Orton misses a knee drop, so Hunter locks in the figure-four. WOO! Orton makes the ropes, but Hunter snaps his throat on the ropes and goes up. Orton crotches him, but misses a charge and posts himself. And with that little piece of business, Helmsley rolls him up for the win and the title. (11:07) Hey, when you have run out of viable babyfaces, Triple H is what you get. ***

In the back, Randy Orton is absolutely fuming. He runs into Vince, who is probably regretting his booking strategy right about now.

London and Kendrick use their quickness to befuddle the tag champs to start. Jeff tags in and teams up with London for Poetry in Motion. Murdoch comes up with a great counter to a jawbreaker – just don’t fall with him. He boots Jeff in the face. Cade stretches open the ropes, and Kendrick falls through to give the heels the advantage. Kendrick rolls through a cravat, but gets cut off. Finally, Kendrick blocks a charge and hits Cade with a tornado DDT. HOT TAG TO JEFF! Jeff busts out his sitout gourdbuster on Murdoch. SWANTON BOMB gets 1-2-NO! Cade makes the save. Jeff misses the rail-runner thing he does. Kendrick wipes out Murdoch (with one of the loudest spot calls EVER). That leaves Kennedy though to crotch London and finish with the GREEN BAY PLUNGE. (8:07) Pretty good, but the crowd only cared about the singles wrestlers because that’s where we have been at now with the tag division for the past few years. **

In the back, Batista reminds Triple H that it’s easier to win it than it is to keep it. Hmm. Nice little role reversal there. Vince tracks Hunter down and tells him to suit up because he has to face Umaga – TONIGHT!

So here we are in CM Punk’s hometown tonight. Instead of booking him to look like a star that might get some people interested in the ECW show, WWE decided to do the opposite and kill any interest it had with this one match. V knocks Punk down to start and gives him the prison rape-style crossfaces. If he screams at Punk to toss his salad, I’m done. Punk manages to sneak out from under the flabby big-top tent of V’s man-boobs and delivers some kicks. That leads to a missile dropkick that actually takes V off his feet. Striker panics and then attacks Punk for the awful DQ. (1:36) Afterwards, Big Daddy V crushes Punk’s ribs after the match. CRAP

Tazz hosts a Pizza Eating Contest between Matt Hardy and MVP. They have Melina and Maria judging this thing in order to keep people from heading to the bathroom. It ends poorly with Matt puking on MVP, which I’m sure has Vince ROFL backstage.

This was the originally scheduled match until the Cena injury shook everything up on the card. Umaga NO-SELLS Triple H’s offensive flurry to start, but charges and gets sent over the top. Helmsley hits a Facebuster, but that’s no-sold as well. Umaga backdrops out of the Pedigree too, but runs into a AA Spinebuster. Another Pedigree attempt is countered to a Samoan Drop. The Gunnslinger works Hunter’s ribs even more, and Umaga follows up with a Diving Headbutt. Umaga misses the buttalanche though and another charge, which posts himself in the corner to set up the PEDIGREE for the win. (6:35) Unlike the opener, the structure of this match actually helped Helmsley’s opponent get over – until they killed that off, too. **

Backstage, the Great Khali is meditating. What could possibly be happening in that brain of his?

Rey finally seems to have regained his quickness. He targets Finlay’s legs and tries a sunset flip powerbomb off the apron. Finlay blocks and wraps Rey up in the apron cover. He tosses Rey into the post and goes to work on the shoulder. Rey flying mares Finlay into the corner and comes back with a springboard crossbody. Rey sets up for the 619, but Finlay takes his head off with a clothesline. Rey tries a satellite headscissors, but Finlay counters to a shoulderbreaker in mid-move. He unties the turnbuckle cover to distract the ref long enough to grab his shillelagh. Rey kicks it back into him though, and ranas him to the apron. He hits a 619 to the back of Finlay’s head and hits a legdrop off the top. Finlay’s head smacks on the floor, and he appears to be out (except for when he opens his eyes and looks around to make sure he’s fooled everyone). The ref makes the “X” sign, and the officials put Finlay in a neck brace and put him on the spine board. Fortunately, they forgot to strap him down onto the spine board, so Finlay hops up and clubs Rey from behind. That’s your sports entertainment finish, I guess. (9:00) This was pretty good up until the non-finish. Why wouldn’t they just have Finlay toss Rey back in and pin him? It’s not like it would kill Rey’s heat. I’m assuming a rematch is still in order though considering Finlay made him look like a fool. **¾

In the back, Vince tells Hunter he’s going to make even more history by defending the title again against former champ Randy Orton in LAST MAN STANDING.

Good grief, I think everyone would agree that Candice’s music is ear rape. Beth just shoves Candice down. Candice comes up with a weird rollup, but Beth kicks her in the gut. Candice grabs a short-arm scissors, which seems like a cool idea so that Beth can power out. Unfortunately, Candice never got it on properly so when Beth goes to deadlift her, Candice just kind of falls off. Candice kicks her way back and gets two off a spin kick. Beth shoves her into the corner though, hits a backbreaker, and finishes with the FLYING PHOENIX for the win and the title. (4:32) I can’t wait for Beth to start using the Glam Slam. Thank God the Candice experiment is over. Beth follows up with a tearful interview about the era of the Glamazon. ½*

Because there were two wooden cages, you could barely see a thing on TV, and apparently it was nearly impossible to see live. It appears the rules are that there are four doors on the inner cage and once a door opens, you have sixty seconds to get out. Otherwise, it closes FOREVER. Once you get out of the cage, you have to scale the second cage (the one with RAZOR SHARP SPIKES ON THE TOP) in order to win. This gimmick match is some WCW-level bull crap. It’s either 1991 or 2000 bad. Take your pick. Khali pulls an Andre the Giant and gets tied in the ropes, but boots Batista back and gets himself freed. He beats Batista down and goes for the door, but Bats pulls him back. Batista avoids a legdrop and hits a SPEAR! Bats calls for the door to be opened, but Khali puts him down with a Dragon Sleeper and chokes Batista up against the prison wall. Khali whips Batista with a strap, but runs into a spinebuster. He can’t make the door though. VICE GRIP! He lets go too early and Bats goes low. He reaches the door, but Khali smashes the door down on the back of his neck. Khali manages to make it over the top of the first cage without scraping his noggin on the top of the arena. Now all he has to do is climb over the twenty-foot cage. Batista wakes up and quickly scales the inner cage. Realizing he’s behind, he LEAPS to the other cage and goes over. Batista drops to the floor first and retains his title. (14:49) Okay, so I think this feud can finally end. They booked the match according to the strengths of the performers, so they at least did that right. **¼

Todd Grisham grabs a word from Triple H backstage. Helmsley gives Orton some a word of warning: great ready to get hurt.

Hunter starts to win a slugfest, but Orton goes after the ribs that were hurt in the Umaga match. The brawl spills to the floor where Hunter goes for a Pedigree, but Orton backdrops out. Back in, Orton continues to go after the ribs. Cool spot as he backdrop suplexes Hunter on the railing. Orton sends Hunter into the steps, but Helmsley keeps getting up. Triple H breaks the momentum with a Facebuster, but Orton comes back with the Inverted Backbreaker. He chokes Hunter out with a spare TV cord. Hunter makes it up at nine. They take it back to the floor where Randy sets up for the RKO through the announce table, but Hunter shoves him through the ECW table. Orton is up at nine. Hunter hits a SICK spinebuster on the floor. Next up, Helmsley tosses the steps into Orton’s head. Orton makes it up at nine again. Back in, Hunter introduces a chair, but Orton goes low and DDTs him on it. RKO ON THE CHAIR! That’ll bust you open. Triple H makes it up at nine and tells Orton to *suck it*. Actually, I was hoping for Orton to haul off and punt him in the nuts for the win, but Helmsley falls instead. Orton sets up to punt Helmsley in the head, but Hunter catches his foot and HUNTERS UP! He tosses Orton to the floor and goes for the Pedigree again. Unfortunately, he dragged Orton right over to the ringpost, which is a no-no. Orton counters to a catapult and sends Hunter right into the post. Orton picks up the steps, but Hunter goes low and hits him with a chairshot. Orton is up at eight, so Hunter sets up for the Pedigree on the announce table. NO! RKO! That’s enough to give Orton the win and regain the WWE title. (20:25) There was a smattering of cheers there for Orton. Surprisingly good match that made Orton look like a true “gut-it-out” monster heel. ****

Final Thoughts: I think it would made more logical sense to have Vince crown Orton as the champion and then make the Umaga/Triple H match the “number one contender” match where Orton faced the winner to still give the fans a WWE title match. This way, you wouldn’t have to see so much Triple H and the new champion doesn’t lose (in a really short match, mind you) and then have to win in the same night. While this show is an improvement over the last two PPV offerings, it’s still just a one-match show. I’m going with thumbs in the middle for No Mercy 2007.