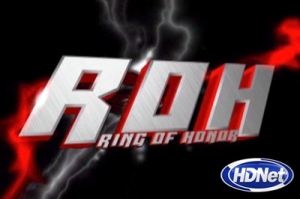 Your hosts are Dave Prazak and Mike Hogewood.

The announcement is made that Bryan Danielson has signed with WWE. He’ll be making his final tour of ROH throughout the month of September.

YES! The match I’ve been wanting to see! Jon Davis starts off with Nick Jackson. Typical strong man start as Davis NO-SELLS whatever Nick sends his way. And that’s the way it should be. Blind tag to Matt, he knocks Chavis up against the ropes with a missile dropkick. Matt grabs an arm and the Young Bucks do some quick tags as they MOONSAULT KICK Chavis in the arm, followed by a DOUBLE STOMP to the arm. They’re like a more athletic version of the Anderson brothers. Sort of. Chavis shoulderblocks away a double-team because he is a STRONG MAN. Double clothesline to the Young Bucks! In comes Davis with the Hart Attack legdrop double-team on Matt for two. From here, Matt plays face in peril until he catches Davis with a pair of boots in the corner and delivers a springboard into a cutter out of the corner. HOT TAG TO NICK! Springboard Splash to Davis! Nick knocks Chavis to the floor, allowing Matt to come in and launch his brother into Davis with a dropkick. Springboard Splash + Standing Moonsault to Davis gets 1-2-NO! Chavis dumps out Matt, Davis DRILLS Nick with a jumping shoulder tackle. After a clothesline in the corner, DCFC deliver a modified 3D for 1-2-NO! Matt makes the save. Chavis whips Matt in, but he floats over, leaving Chavis wide open for a superkick from Nick in left field. MORE BANG FOR YOUR BUCK fails, as Chavis shoves off Matt and gives him a Protobomb. With Nick still up top, he sunset flips Chavis into a jackknife cover for 1-2-3! (7:43) And the Young Bucks sneak out a win in classic RNR Express fashion. Terrific little match, but I feel they could do an amazing match with sayyyyy, twenty minutes? Hey my request for this match came true, what’s it hurt to ask for one more? ***¼

The Briscoes talk up their feud with Steenerico.

That’s right – Bison Smith is in the Embassy and he’s a mean looking dude. Better known for his work in Japan, he’s currently the co-holder of Pro Wrestling NOAH’s GHC tag team championship with a guy named Akitoshi Saito – the longest reigning GHC tag champs of all time AND most recently, they were Misawa’s opponents on the night he passed away. Rinauro makes a HUGE mistake right at the start with a slap and takes a Buckle Bomb for his ignorance. Bison lifts him up in a military press and then tosses Sal into the corner. To the floor, Bison suicide dives on Rinauro over the railing. SLAP THE PORPOISE! Back in, Bison flips him over on his back and pins him with a boot on his chest. (2:20) You see what happens when you get in the way of the Embassy? TOTAL DESTRUCTION. *

ALRIGHT! It’s about time we got some Joey Ryan on here. Colt Cabana answers the open challenge and kicks Ryan to the floor so he can take off his jacket in peace. Cabana does a bunch of his signature escapes into rollups. Nana ties up Cabana’s foot with some scarf to assist in a dropkick from Ryan. Joey does some arm work, but Cabana answers back with a quebrada for two. Ryan stops the Windmill Punch and goes back to the arm. Cabana catches Joey coming off the middle rope and gets that Windmill Punch he wanted earlier. Flying Butthole connects, but then he charges into a Superkick for 1-2-NO! Nana wants Joey to finish him off, so he goes for the MUSTACHE RIDE. Cabana shoves him off, kicks Nana away, and applies the BILLY GOAT’S CURSE to Joey for the submission. (6:27) Sal Rinauro comes up from under the ring still selling the beating from Bison Smith and gets whacked in the face by accident by Colt. Oops. Poor Sal. Decent TV match. **¼

Flashback to last week where Nigel McGuinness assisted in Tyler Black taking his eyes ‘off the ball’ to allow Jerry Lynn to pick up the victory.

In the back, Prince Nana says that if you’re with Colt Cabana, you’re against the Embassy. LOOK OUT!

Nigel McGuinness is in the front row and he has a mic. He points out why the ROH wrestlers care about competing in front of the ROH crowd when they make rude and crude comments to them. Who’s in control? The wrestlers or the fans? Nigel gets up from the nasty Philly crowd and questions who is to blame for the physical wreck he has become. The wrestlers who took every chance to injure him when he couldn’t protect himself or the ROH wanker fans who encouraged it. But from now on, he’s going to hurt his partner worse than he feels. The catchphrases are over – don’t say he didn’t warn you. SUH-NAP.

ROH world champ Austin Aries conforms the rumors of the first ever A-Double Lucky Lottery. The man selected gets a ROH world title shot! Which hat will he choose? A weird British hat? A Big Bird toboggan? Find out next week!

Seems like a ‘winner gets an ROH tag titles shot’ match, but apparently it’s just for old time’s sake. Mark and Steen start us off. Spinning heel kick from Mark causes Steen to tag out. Generico answers back with a bunch of armdrags. In comes Jay, he chops Generico around. Tag to Steen, he ends a shoulderblock battle with a slap across the face. Jay returns the favor, Steen fires a SNOT ROCKET, so Jay spits on him. Steen delivers some forearms, but then runs into a dropkick. Nice exchange there. Running kick to Steen off a snapmare gets two. Mark tags in and can’t get a suplex, so Steen gets one instead. Tag to Generico, he gets cornered on the wrong side of town and receives the STEREO THREE POINT STANCE. Cover, 1-2-NO! Back over to Steen, he lands a DDT on Jay for two. Somersault legdrop off the drop toe hold connects on Jay for 1-2-NO! Jay comes back with an STO in the corner and hot tags Mark. He chops away on Generico and takes him down with an Alabama Slam. Out goes Steen with a jumping head kick. Generico catches him with a boot off a corner charge and backdrops Mark to the apron, then randomly hits Jay on the floor with a somersault plancha while Mark does the same on Steen! Back in, Generico and Mark go at it again with an exchange of forearms. Mark runs into a Michinoku Driver from Generico for 1-2-NO! “MAN UP” chants go up. Generico goes for the Yakuza Kick in the corner, but Mark stops him with a superkick. Tags on both sides, Steen and Jay destroy each other with forearm strikes. Jay wins that battle with a face wash and as the Briscoes try the tandem charge into the corner, Generico stops that with an Yakuza Kick to Jay! Mark drops Generico with a Uranage! He tries a rana on Steen and gets nailed with a powerbomb! Everybody’s down! Steen catches Jay with a Code Breaker and tries the Senton Bomb, but Jay brings the knees up! Tag to Generico, the Briscoes drill him in the corner with a clothesline, followed by a cutter from Mark! Meanwhile, Jay is giving Steen a Death Valley Driver on the apron! REDNECK BOOGIE to Generico! Cover, 1-2-NO! The Briscoes try for the SPRINGBOARD DOOMSDAY DEVICE, but Steen pulls Jay off the apron as Generico gets a victory roll on Mark for 1-2-NO! Jay takes an Exploder into the corner from Generico. Steen weakens him some more with a Cannonball Splash as Generico ascends to the top for the COAST TO COAST! Oh dang. As Steenerico goes for the PACKAGE PILEDRIVER + BRAINBUSTER finish, the American Wolves storm the ring and attack everybody for the double DQ. (12:14) While this comment isn’t much, ROH has the best tag team division of any promotion in the US. ***¾

Since its four-on-two, Steenerico and the Briscoes dispose of the Wolves. Steen gets on the mic and challenges the Wolves to LADDER WAR II at Glory By Honor VIII in NYC on September 26. Too bad the show is already sold out.

Next week, Necro Butcher battles Jimmy Rave. Plus, ROH world champ Austin Aries will put everyone’s name in the locker room into a hat and select one lucky (or unlucky) man to receive a ROH world title shot. And in the main event, Bryan Danielson, KENTA, and Roderick Strong meets Chris Hero and the American Wolves!