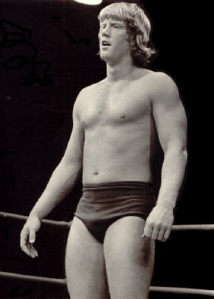 This won’t be a recurring series for me. I’m just trying to clear off my hard drive and recap some of these cool things I’ve received through the interwebs on WWE 24/7.

Your host is Gordon Solie.

The show starts off with clips of Butch Reed chasing Ric Flair into the ring and ripping up Flair’s fancy suit before tossing him out from inside the ring to the floor on top of David and Kerry Von Erich. In other big feuds of the time, Dusty Rhodes messes with Kendo Nagasaki by dressing up as Mr. Ichiban, which might be considered racist by 2012 standards. So yeah, Dusty is BACK just as promised.

Experts say Ric Flair will not leave Florida as the NWA world heavyweight champion. That is all.

After winning a number of the regional titles in CWF defeating most notably Dory Funk Jr. to win the Florida heavyweight title in 1981, this was Barry’s big return to Florida. Later that same year, he suffered some injuries in a major car wreck and had returned home to North Carolina to get better. He would get back on his feet in the Mid-Atlantic territory towards the end of the year feuding alongside his father Blackjack Mulligan against Sgt. Slaughter and now he’s back in Florida ready to make a go of it once again. He looks good and basically destroys Russell in no time with a couple LARIATS at 2:28.

Over at the desk, Gordon Solie makes the statement that money talks and that former Yankee player Reggie Jackson who had recently signed with a former big time rival in the LA Dodgers proves that fact (which is untrue since Reggie had signed to play with the California Angels in 1982 and not the LA Dodgers). Anyways, the comparison Solie is trying to make is that former babyface Jimmy Garvin has signed up with the likes of JJ Dillon. Money has talked and now Jimmy Garvin feels he is on his way to becoming the next NWA world champion. His first stop will be winning the Florida heavyweight title from Mr. Wrestling II though, which he does in about a week’s time. He’s got the big hair and the mustache, but Garvin is not quite precious yet.

Before the next match, we see Chavo Guerrero working over Hiro Matsuda’s leg in some arena footage. Matsuda mounts a comeback and lifts Chavo up on his shoulders for an airplane spin, but Chavo counters into a victory roll for the win. Chavo just looked so good here.

As soon as Nagasaki comes out of what appears to be his fencing helmet, he turns around into a series of dropkicks by Chavo. When things get out of hand for JJ Dillon, he distracts the ref while Nagasaki jabs him in the throat. He grabs Chavo’s windpipe and blood begins pouring out of Chavo’s mouth. Mike Graham apparently smells something funny about that jab to the throat and attacks Nagasaki for the DQ at 1:15. Graham beats Nagasaki and chases JJ Dillon back to the dressing room. Just an angle match I’m sure to get Dusty even more fired up, but BOY does Chavo appear to be in bad shape.

This version of the Super Destroyer I believe is the late Scott Irwin. Graham is still very incensed after what just happened, but Destroyer tries to calm him down with a headlock. It doesn’t work. Blair tags in and levels Destroyer with an armdrag still maintaining control. Tag back to Graham, Destroyer corners Graham and tags in Matsuda, who wants to take this to the mat. Graham is more than willing to oblige, but can’t match skills in that department. They take turns working over Graham’s arm. He eventually slings Destroyer away using the bad arm and makes the tag to Blair. He hoists up Destroyer for the Airplane Spin and finishes Destroyer off with the COBRA CLUTCH. (6:03) Even though they aren’t the tag champs, Solie puts over Blair and Graham as *the* best tag team in Florida. **

AWA fans know Derek Draper best as Col. DeBeers. Everyone else has been seen before in earlier recaps. Solie mentions how Dory Funk Jr. is returning from some time spent in Japan defending the NWA International heavyweight championship (which later becomes one-third of the All Japan Triple Crown championship), which he had lost to Bruiser Brody. There’s another fact that alludes Gordon tonight. Anyways, Allen and Apollo try and cut the ring off on Draper with hammerlocks. That doesn’t work as Draper reaches Funk for a tag. Now Apollo and Allen concentrate on armbars, but Dory forearms Allen to end all that. Back to Draper, he keeps Allen at bay with a headscissors. Dory tags in and punishes Allen with forearms, who fights back with punches of his own. He knocks Dory down and tags Apollo. He nails Dory with a running forearm, but whiffs on a dropkick. Tag to Draper, he works on Apollo with a chinlock. When he comes out of the hold and starts fighting back, Draper corners him and tags Dory. Butterfly suplex gets two. Piledriver only gets two. He tries a suplex, but Apollo counters with one of his own. Hot tag to Allen, he grabs a sleeper on Dory. Draper quickly breaks it up, but takes a dropkick by Apollo to the floor. As Allen comes off the ropes, Draper pulls the top rope down for Allen to go crashing on the floor and jamming his knee. Dory gives Allen a suplex back inside for the 1-2-3. (7:07) Despite their best efforts, the crowd just didn’t seem into it. *½

Barbara Clary does some “investigate journalism” by simply playing back the tape from last week when David Von Erich pinned Sweet Brown Sugar for the Florida TV title with his feet on the ropes. However, instant replays much like in baseball at the time cannot change the initial decision of the referee. NWA President Jim Crockett Jr. announces that the title change stands, but Sweet Brown Sugar will get a Florida TV title rematch against David Von Erich in due time.

Gordon says David Von Erich’s (heel) personality comes from being a millionaire and how he loves telling us all about it. Hmm, sounds like another familiar gimmick. He’s VERY cocky and convincing, I might add. Reed is all wristlocks and headlocks to start. Von Erich takes over with a chinlock as we run out of TV time at around 6:00.