TIME TO GET RAW! Your hosts are Jim Ross, Michael Cole, and Kevin Kelly.

On this special Christmas edition of Raw, snowflakes are falling from the ceiling as D-Generation X comes out to the ring. Shawn Michaels and Hunter Hearst Helmsley are wearing bathrobes, which has to scare some people just a little bit. They gloat over destroying the legacy of the Legion of Doom. Helmsley tells the New Age Outlaws that if they want to take credit for what happened, they need to think again before they both get hurt pretty badly. That was DX’s moment and ONLY DX’s moment. Talk turns to Owen Hart. Helmsley says he will be Owen’s worst nightmare and send him packing. Since Owen is the baby of the Hart family, Hunter offers him a pacifier that he can suck on. He’s going to stick his dick in Owen’s mouth? WHAT. Shawn takes the mic and discusses the chances of the Undertaker beating him at the Royal Rumble. He won’t rest in peace because Shawn can stay up-all-night. Now they show the WWF fans their Christmas present. They take off their robes and reveal some corny Christmas boxers. Of course, it doesn’t end there as they take them off and “moon everybody”. Some DX censor logos appear over what we didn’t want to see in the first place. Lots of Christmastime dick puns all around from the commentators AND HHH and Shawn. Well, Commissioner Slaughter finally has enough of this and comes out to confront these idiots. Thankfully, the robes are back on. Slaughter tells Shawn that he must defend the WWF European title tonight or forfeit the championship. Tonight, his opponent will be: Hunter Hearst Helmsley. Of course, this causes some competitive friction between the two. Shawn Michaels doesn’t lay down for ANYBODY. 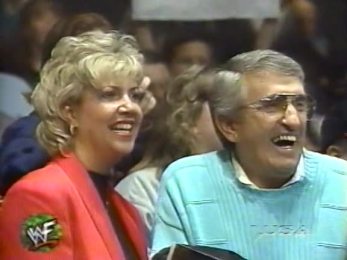 This was a real reaction caught on camera to the above DX shenanigans.

Headbangers wear Santa hats and those push button twirling suckers used to market cartoon characters out to the ring. The Godwinns tell Michael Cole they will get revenge on the Headbangers for beating them on Shotgun Saturday Night this past week. As for the New Age Outlaws, they feel they are OWED a WWF tag title match. This doesn’t take long to devolve in a big brawl between these two teams as the Godwinns leave the Headbangers laying after Slop Drops. Out comes some leather straps as the Godwinns whip on the Headbangers like government mules. Since Phineas was the first to strike, Thrasher wins this match via DQ at 1:13. ¼*

They air a video package highlighting the abuse Dude Love has taken at the hands of the New Age Outlaws over the past two weeks.

We saw last week where Dude Love started to show some characteristics specific to Mankind. Maybe making a switch back to his old persona. We now go to the boiler room where Mankind is rocking back and forth promising yuletide beatings for the New Age Outlaws. Have a nice day.

They show a clip that happened off-air last week when Steve Austin makes a Santa Claus pay for kicking a kid out of the ring. You can probably guess exactly what happens to the man. OH HELL YEAH.

Over at the DX locker room, the door is closed and yet we can still hear a bunch of yelling going on. Shawn walks out of the room livid and Chyna goes after him.

Rocky tries to get Undertaker all distracted with the Nation around ringside, but doesn’t really succeed. Taker punches back and lands the big boot and legdrop for two. He tries for Old School, but that’s when Paul Bearer walks out rubbing his hands together like a weirdo. While everyone is watching Paul Bearer, Kama gets up on the apron and low blows Taker to break up Old School. Commercials! When we return, the NOD are putting the boots to Taker on the floor. Back inside, Taker receives more of the same abuse. Rocky slams Taker and delivers what will become known as the People’s Elbow for two. The Samoan side of Maivia kicks in and he grabs a nerve hold. When Taker stands up, Rocky clotheslines him down. D’Lo hop up on the apron to distract the ref so that Rocky can punch Taker in the balls. Back to the nerve hold. Taker eventually punches back and legdrops Rocky when he telegraphs a backdrop. Cover, 1-2-NO! D’Lo tries to distract the Undertaker one last time, but fails. Rocky misses a clothesline and turns around into a CHOKESLAM to set up the TOMBSTONE. As Taker covers, the lights go out and we know what’s coming. (8:35 shown) Paul Bearer brings out Kane as the Nation of Domination clear out. Once again, Bearer tries to talk the Undertaker into fighting Kane, but Taker will not strike his own flesh and blood. Even when Kane beats him down into a corner, Taker considers firing off a wicked soup bone for just a second, but never pulls the trigger. That’s the closest he’s come to doing anything about this Kane situation to date. Paul Bearer – “1998 will be the year of Kane.” **

ENTER THE WARZONE! Your hosts are Jim Ross & Jim Cornette.

Chyna comes out carrying both of HBK’s belts. As Helmsley makes his entrance, Owen Hart comes up from behind and tackles him down for a beating until Commissioner Slaughter appears and pulls Owen off HHH. Michaels and Chyna come over and accuse Slaughter of collusion. This match will happen – later tonight!

In the back, the New Age Outlaws go looking for Mankind in the boiler room, but all they find is someone else who isn’t Mankind and beat him up.

Ross and Cornette know Sable is in the building and she is HOT. This week, he introduces Sable and she comes wearing a reindeer costume. So she’s a furry now? Everyone is quite disappointed though. As Taylor has been known to do, he gets a few moves on Mero including a couple nearfalls when Sable takes the Rudolph head off. TKO ends Taylor though. (2:26) When Mero looks for some extracurricular activities, Tom Brandi heads down and beats him up. As Brandi leaves the ring walking tall, Sable removes the rest of her reindeer outfit and reveals a much more conservative than last week Santa’s helper costume. While Mero is trying to recover, Sable gets on the mic and wishes everyone a Merry Christmas. She heads to the back without her hubby. ¾*

In the back, Hunter Hearst Helmsley promises to teach Shawn Michaels a lesson while Chyna whispers stuff to him.

Jackyl gives a chick at ringside a kiss on the cheek and puts a dot on her forehead. If you ever thought Jimmy Hart or Jim Cornette was loud at ringside, Jackyl gets a house mic. This goes about as well as you might think it would. Kurrgan ends 8-Ball with a SIDE SLAM. (2:41) 8-Ball goes after Jackyl after the match, but he’s laid out by Kurrgan again as Recon and Sniper are apparently NOT ending their relationship with this guy. The Truth Commission is still alive and well. Sigh. Skull comes out and saves his bald twin brother by chasing the TC away with a 2×4. ½*

The New Age Outlaws continue to search the bowels of the Lowell Memorial Auditorium looking for Mankind, but haven’t found him yet.

Ross thinks Shamrock will be the WWF champion before the Royal Rumble. Hmm. Shamrock keeps D’Lo grounded and goes for the leg early. D’Lo has yet to find himself in the WWF and plays JTTS here. Out of nowhere, Shamrock lands the Belly to Belly Suplex and applies the ANKLELOCK for the instant tapout. (2:26) After the bell, Rocky Maivia comes out and calls off Faarooq and Kama from attacking Shamrock so Rocky can challenge him to an IC title match at the Royal Rumble. Faarooq continues to look pissed as to why he’s being ordered around by this rookie kid, but whatevs. ¾*

Now over to a different locker room (I suppose), Chyna whispers things to Shawn Michaels. HBK says he’s going to teach Hunter Hearst Helmsley a lesson. I smell a rat.

So the New Age Outlaws finally come upon Mankind in the deepest bowels of the building. He beats the crap out of them, but the Outlaws manage to lock him in a walk-in freezer.

TAFKA Goldust and Luna Vachon come out to express themselves. Goldust is dressed up like a gay Christmas tree and reads “Twas the Night Before Christmas”. Hey look, a Santa Claus comes out and tosses candy to the kids. What an opportune time to pass out candy. I do enjoy Goldust’s reaction though. As Goldust continues to read, Santa hops in the ring and DRILLS Goldust in the back of the head with his sack. As Santa delivers a body attack, Goldust and Luna roll out to the floor. Santa takes off his beard and shows us it’s TMTC Vader. That is not a jolly fat man, Cornette.

Some stalling to start as both men take turns getting advice from Chyna. As they tie-up, Michaels takes a bump to the mat. Helmsley starts running the ropes and does about as fake looking WARRIOR SPLASH as you’ll ever see inside a WWF ring for the three-count and the European title. (1:38) Cornette – “It was a ruse, a ploy, a plot, a plan, a charade, a conspiracy, a sham. We’ve been conned, hoodwinked, bamboozled, flimflammed, had the wool pulled over our eyes even.”

Afterwards, Shawn and HHH cut sarcastic promos about this was the most grueling and rewarding matches of their careers. Commissioner Slaughter comes out and gets the last laugh because he tells the camera that next week Hunter Hearst Helmsley will face Owen Hart for the European title.

This move turned the European title into a joke and the title never recovered. It became a lower mid-card belt comparable to the TV title over in WCW, but even that championship had its moments in 1998 with the Booker-Benoit series until it was pushed right back down into worthlessness and tossed in the trash in late 1999. If you can remember one classic European title match that didn’t happen in 1997, then more power to you.