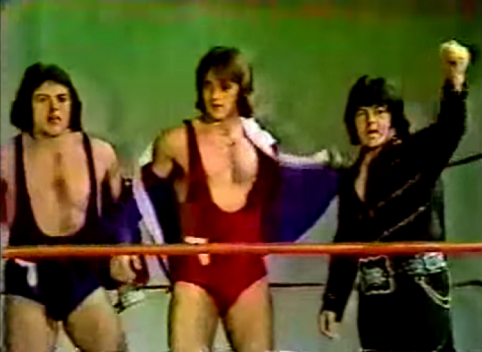 Ellering is strutting around super proud of winning the southern tag titles. Hassan doesn’t seem to care one way or another. Regal and Lyons take control of Ellering for a bit though until Ellering powers up Regal and slams him down. Regal outsmarts Hassan with a dropkick and grabs a headlock. Thanks to Ellering hopping in the ring, Hassan is free to rake the eyes to get out of the hold. Tag to Ellering, he slams Regal and misses a big elbow drop. Lyons tags in, but can’t stop Ellering reaching Hassan. Lyons gets whipped into the ropes for a knee, but manages to punch Hassan back and tags Regal. He’s all hot, but makes Ellering mad and gets Regal cornered on the wrong side of town. Regal fights back against Hassan, but Lyons takes a low blow when ref Paul Morton gets distracted. Ellering tags in and beats up Lyons. He tags out and Regal tries to put somebody away. He’s gone DROPKICK CRAZY here. Tag to Lyons, he gets pushed into the ropes for the O’Connor roll, which gets flubbed. I’m sure that move is harder to pull off than it looks. Ellering gets pissed off and starts slamming Lyons over and over. He gives Lyons a half-done atomic drop and covers him for the win at 10:03.

Time for some Louisville Gardens promos. They push Superstar Bill Dundee in a coal miner’s glove match with Sonny King. Dundee stops by to talk some smack. Next up, there will be a six-man tag with Ken Lucas, Billy Robinson, and Jimmy Valiant taking on Paul Ellering, Ali Hassan, and Jimmy Hart. Lucas puts over Robinson as a guy who holds grudges and he’s looking for revenge. You can’t do promos without Handsome Jimmy either. Six is one of his favorite numbers. He says he’s been married six times and divorced seven. The guy is ALWAYS a classic on the mic in Memphis – I will say that.

An angry Lucas starts out beating up Oswald. In comes Valiant, he slings Oswald over to Upton. He does a little slamming and pounding. He tags Lucas to get a break. Lucas delivers a back elbow and drops a couple knees on Upton for the win at 2:33.

They show the last minute or so of the southern tag titles change in Louisville back on March 15. A recap of that match and the wild aftermath is just a click away.

Despite the size difference, Morton maintains hold of Buddy and keeps him grounded with headlocks and hammerlocks. Paul Morton is refereeing this thing and nobody seems to notice that might be a problem. Wayne finally catches Rick with a knee, but a Thesz Press catches Buddy off guard and Morton picks up the win at 4:11.

Condrey starts the match and gets frustrated by Dundee and Robert. Tag to Schultz, he doesn’t have much more luck. In comes Ricky, he gets drilled with a backdrop as Sonny gets a tag. King punishes Ricky with a Randy Orton-style chinlock. Somehow it looks much painful though. When Ricky tries to stand up, King bends Ricky over his knee with the hold still applied. Awesome. While Robert and Dundee start to come into the ring, King brings Ricky over to Condrey to choke him on the top rope while Schultz lowers the boom. As things calm down, King gets his showdown with Dundee. They slug it out until Schultz grabs Dundee by the tights so that King can headbutt him. Condrey delivers knee drops to Dundee, but can’t get the pinfall. In comes Dr. D, he hits a suplex for two. Sonny nails Dundee and twists on the neck. More shots are traded. Dundee catches King with an elbow, but Sonny tags out. Schultz gets whipped into the ropes for a dropkick by Ricky. Double KO ensues. Condrey gives Ricky a HUGE backdrop for two. Sonny tags in and puts Ricky down for a neck vice. Things get a little out of control, but then Condrey whips Robert into the corner and charges into a Jack Brisco rollup for the three-count to win the fall. (9:34) Russell REALLY loved this first fall and so did I. ***

Our last of the Louisville Gardens promos for the night. Russell hypes up the six-man tag main event for Tuesday night and brings in Paul Ellering, Ali Hassan, and Jimmy Hart. Jimmy wonders why people are always trying to get him into the ring. He’s a manager, not a wrestler! Ellering goes off on a coke-filled rant calling Billy Robinson, Ken Lucas, and Jimmy Valiant the three little pigs and they will set their house on FIRE. Oh boy.

Lance Russell wishes we had two hours today for this six-man tag. Unfortunately, we do not. Russell and Brown wrap up the show and we are outta here for another week.