HOUR NUMBER ONE! Your hosts are Tony Schiavone, Mike Tenay, and Larry Zbyszko.

We recap the feud between Hollywood Hogan and Diamond Dallas Page that now has included Dennis Rodman and Karl Malone. They show Hogan and Rodman on the “Tonight Show with Jay Leno” talking all big and bad about DDP and Malone.

Onto the show, Gene Okerlund introduces DDP to the crowd. He is JACKED and super over in Jacksonville. DDP is sick and tired of Hogan and his lifestyle. He thinks Hogan doesn’t work hard enough anymore and DDP wants it bad. When Karl Malone saw DDP get his back cracked by Hogan and Rodman, he let DDP know that he wanted to be in the ring. He puts over Rodman’s ability to market himself, but in the ring Rodman is a DEAD MAN. At the Bash at the Beach whether they like it or not, Rodman and Hogan are getting banged. So does this make DDP the Kobe Bryant of wrestling? Just a thought.

My tape cuts out the next two matches and if I’m being honest, I’m too lazy to look up the Nitros on the WWE Network. Here what we missed:

We JIP to Rocco Rock making a hot tag to Grunge. Pretty bad finish as Horace hits Sick Boy with his stop sign not once but twice. Rocco dives onto Horace who hits himself with the stop sign to get the pin. (1:53 shown) Holy crap. That was terrible. Please never do this again, guys. N/R

NITRO GIRLS! Now the Nitro Girls are wearing nWo t-shirts. Good grief. WCW really doesn’t get it. We get some Fyre time though so that makes up for it a little bit.

Gene Okerlund brings out Bret Hart to discuss his upcoming match with Chris Benoit. He says Chris Benoit was a fine Canadian until he came down here. Bret channels a little bit of his 1997 character by talking about how the fans have ruined heroes in wrestling. He then tells us Benoit has the opportunity of a lifetime with the greatest technical wrestler in the history of wrestling. DAMN STRAIGHT! Bret finds Benoit is hopeless and full of fear because he knows he will go down to the “Excellence of Execution”.

They take us back to the “Tonight Show on Jay Leno” from five days ago when DDP and Karl Malone confronted Hollywood Hogan and Dennis Rodman. Leno constantly joking and cracking up over the whole thing doesn’t make it seem like a Lawler/Kaufman moment in the least. It’s all pretty silly, but understandably a big deal for WCW as far as mainstream media goes.

RICK FULLER SIGHTING! Goldberg shows off his legbar routine. Fuller avoids a corner charge which Goldberg NO-SELLS, but he does sell the kick to the knee and a spin kick that knocks him down. Fuller wants to kick Goldberg some more, but Goldberg hoists him up and slams him down like he’s just given Fuller the SPEAR. Well, there’s the JACKHAMMER and good night at 1:30.

Mike Tenay talks with the marks outside the building before the show, which now seems to be like a regular thing for him.

Back in the building, the nWo Wolfpac head out to the ring. Both Lex Luger and Randy Savage are missing this week. Nash makes a South Park reference involving Goldberg. Alright. Sting talks to a blowup doll thrown into the ring. He issues a challenge to anybody who wants their WCW tag team belts. Nash wraps up with a “just too sweet”.

Chavo Guerrero screws with Eddie during his entrance. Eddie is “off a step” since losing to his nephew back on June 14. Just as Eddie is about to put Wright away with the Frog Splash, Chavo comes down to cheer on his uncle. While Eddie gets distracted, Wright blasts him from behind with a reverse neckbreaker for the upset win. (4:57) Chavo continues to mock and act all passive aggressive to Eddie. *

Seems like a waste for both guys, but alright. Riggs has to work Konnan’s style here because it’s Konnan. He knocks away Lodi, avoids a missile dropkick from Riggs, and then applies the TEQUILA SUNRISE for the tapout. (4:47) It looked like Riggs was game here. Because hey, it could have been worse. ¾*

They air the press conference for the main event of the Bash at the Beach that took place at Planet Hollywood in Los Angeles. They hyped it up so high that it couldn’t possibly live up to expectations. Malone actually looked the best out of the four though.

I understand why it’s happening, but I still don’t want to see it. This was punching and kicking and biting and choking from the word go. Commercials! When we return, Mongo escapes a chinlock only to get kicked in the face. They go to the floor for some ringside violence. Stevie Ray whips McMichael into the steps. Back inside, Stevie Ray brings with him a chair. Chris Benoit comes down and steals the chair away before any damage can be done to Mongo. Booker T appears and takes the chair away from Benoit and calms the whole situation down. Stevie Ray wanted Booker to hit them, but Booker isn’t that type of man anymore. DQ or countout? Whatever. Mongo wins. (6:06 shown) Cue the weekly “We Want Flair” chants. ½*

Hollywood Hogan and his crew head out to the ring. Scott Steiner is now part of the crew, I suppose. Eric Bischoff takes full credit for breaking Randy Savage’s leg. They talk about how Elizabeth only stayed with Savage because of his pocketbook, but Savage couldn’t compete with Bischoff when it comes to cash flow. Hogan tears apart DDP and Karl Malone. He thinks DDP is only famous because his wife was in Playboy and because she’s the leader of the Nitro Girls. He even calls him “Little PP”. As for Karl Malone, he’s the biggest loser in the NBA who can’t win the big one. After he and Dennis Rodman get done beating them in bloody carcasses at the Bash at the Beach, Hogan says he’s going to drag them back to Venice Beach and feed them to his pet killer whales. Hmm, seems like an irresponsible pet to me. Either way, classic heel Hogan stuff here.

This is the first time meeting between these two. Benoit gets the better of Bret to start concentrating on the armbar. Bret gets in the corner and unloads on him so he can stun him with a DDT. He runs Benoit’s eyes on the top rope and chokes him in the corner. Benoit chops him back, but Bret suckers him into another corner to deliver some lifters. Benoit reverses a corner whip, but runs into a boot and takes an inverted atomic drop to set up a running clothesline. Bret misses a flying elbow, but hits Benoit with a hotshot. Bret kicks Benoit to the floor and posts him real good. Back in, he delivers a nice piledriver for two. Commercials! When we return, Benoit continues to kick out of stuff to frustrate Bret. As the tension builds and Bret gets in the face of the ref, Benoit sneaks up behind him for some Rolling Germans. Benoit switches to a Dragon Suplex, but he’s too beaten up to make a cover. There’s the Snap Suplex, but he misses the Swandive Headbutt! Bret headbutts the groin, but gets crotched up top for a superplex! Cover, 1-2-NO! Short-arm clothesline from Benoit gets two as well. Bret goes to the eyes and wants a suplex, but Benoit counters to the CRIPPLER CROSSFACE! Oh, but Bret makes the ropes. Benoit drags him back to the center of the ring, but Stevie Ray is on the apron. While the ref is busy with him, Bret whacks Benoit over the back of the head with something and lays Benoit on top of him. When the ref turns back around and counts the pinfall, Bret kicks out at two and rolls Benoit over to apply the SHARPSHOOTER. I mean, Benoit is out. His arm drops once, twice, and three times to give Bret the hollow victory. (12:20 shown) They built some great drama for Benoit’s comeback, but the finish was pretty weak. Afterwards, the camera shows it was a blackjack that took out Benoit, which becomes Stevie Ray’s thing once he joins the nWo. Good match overall though as if there was any doubt. I enjoy seeing Bret heeling it up since he hasn’t really got to do that in a match on Nitro yet. ***½

They replay the attack on Kevin Greene earlier in the show courtesy of the nWo when he dared to mention the name of Goldberg and the resulting shouting match backstage where JJ Dillon made tonight’s main event.

Greene wears some “makeshift wrestling attire” says Tenay. He shoulder tackles Giant into the corner, but Giant cuts him off with a clothesline and drops an elbow on him. Greene headbutts Giant in the cantaloupes and that cues Curt Hennig and Rick Rude to come down and continue their beatdown of Kevin Greene for the DQ at 1:13. The Disciple, Brian Adams, and Vincent join in on the fun. HERE COMES GOLDBERG. The crowd loses their minds. You would think glass was breaking over the PA system. Vincent comes after Goldberg in the aisle and goes down to a SPEAR. Hennig, Rude, and the Giant clear out of the ring, but Disciple and Adams take SPEARS. Afterwards, Greene sends out a challenge that he and Goldberg should face Hennig and the Giant in a tag match at the Bash at the Beach PPV. WILL IT HAPPEN? We will find out soon enough.

And that’s all she wrote for tonight. Until next time, so long for now. 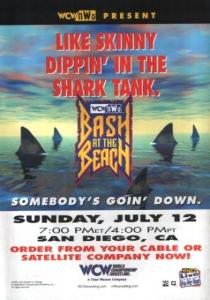