Pop Culture #1s of the Time:
#1 Movie of the Week: Julia starring Vanessa Redgrave & Jane Fonda
#1 Song of the Week: You Light Up My Life by Debby Boone
#1 TV Show of the 77-78 Season: Laverne & Shirley starring Penny Marshall & Cindy Williams

Rodz stalls a bit to start. Once they lock up, Rodz gets to pulling hair during an overhead wristlock. He corners Zbyszko and drives his face into the buckle. Eventually, Larry Z has enough and starts firing back. Rodz suckers Zbyszko into the corner. However, Larry Z is quick to turn the tide on him. Zbyszko is a HOUSE OF FIRE. Well, for the WWWF, anyways. Rodz kneelifts Zbyszko out of the corner and lowers the boom on him a few times. He can’t get the pinfall though. Rodz hits a splash, but only gets two. He misses a second one and Zbyszko catches him with a small package for the three-count. (9:29) An okay opener. *

The Tony Garea versus Baron Mikel Scicluna match has been cut. I know, I’m as disappointed as you are.

As we learned on the last MSG show, throwing roses to the crowd is Larry’s thing. Rivera wants none of that gay shit and gets to RASSLIN’. He is all about the hammerlocks and wristlocks to start. Sharpe’s tights might seriously be the worst looking man on this show, which I’m sure is the point. You can see all his business in those things. Not exactly an action packed adventure here. Sharpe wins with an ugly vertical suplex. (10:22) No heat for one awful match. ½*

Pretty much a Butcher Vachon squash as there’s lots of biting, pulling, and pounding on Hurst. Lenny gets some fiery moments in, but Vachon is quick to cool him off. Hurst does get a sunset flip on him for 1-2-NO! He kicks down Vachon and gets him begging off, but then Hurst telegraphs a backdrop and takes a kick in the mouth. Fearing another comeback, Butcher applies the HANGMAN’S NOOSE and gets the submission. (5:59) Yep, a glorified squash here, but an energetic one at least from Hurst. *

Leilani Kai is announced as making her MSG debut here. Seven years later in this same arena, Kai would go on to win the WWF women’s title from Wendi Richter as part of the Rock N Wrestling phase and be part of the first WrestleMania. I can imagine fans who started being fans from around the Attitude Era time period would look at these chicks and go, HUH? But people have to understand that wrestling back in those days – whether you were a man or a woman – had very little to do with the way you looked and more to do with how tough you looked. They weren’t supposed to be eye candy from a 13 year old boy’s wet dreams, they were supposed to be TOUGH looking women. I know my references are dated, but I’m from North Carolina and I’ll make an Andy Griffith Show reference if I want to. Back in these days, you wanted your women’s wrestlers to look like the women from the Convicts at Large episode. See below: 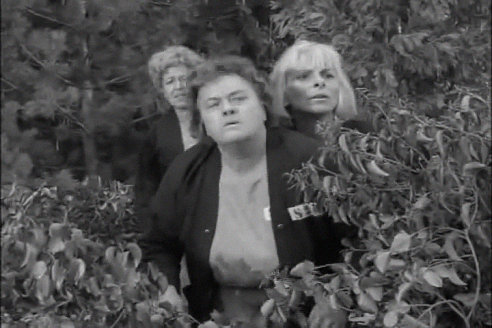 Anyways, there’s a lot of hairpulling and hairmares and choking from the heels. I know Leilani Kai and Vivian St. John were trained by Fabulous Moolah, but I wouldn’t be shocked if the other two weren’t as well. There’s little to no heat for anything happening here. The crowd is about as bored as I am. Little Heart finally gets a tag from St. John and she decides to go on the WARPATH. She’s stealing Strongbow’s gimmick! Once she’s done with the monkey flips, Kitty punches her in the baby maker and starts the hairmares. She gets whipped into the wrong corner, allowing Leilani and Kitty to DOUBLE SLAM Little Heart for the win. (10:43) Leilani Kai strutting around at the end might be the best thing about this match. *

Vince talks with Dusty Rhodes who raps a CLASSIC promo that if Superstar Billy Graham did it, the crowd would be booing. Vince explains that a Texas Death match is just a no holds barred contest. While the Wizard takes off Superstar’s shirt, Dusty comes over and kicks Graham one good time. As Dusty goes after the Grand Wizard, Superstar hits him from behind. Dusty ain’t selling those stomps and unloads with elbows. He points a finger at Graham’s face and whips him hard into a corner. Graham then rolls out and takes a breather, but Rhodes chases him back in the ring to elbow him some more. He takes another powder and then heads back inside to jab Dusty in the throat. They brawl into the aisle, but Dusty shoots Graham back into the ring and drops another elbow on him. Superstar is just playing possum though as he low blows Dusty and takes him to the floor for some ringpost and guardrail violence, which you don’t really ever see in the WWWF. Dusty is sure to get busted open now. Graham then finds a rope and chokes Rhodes. He then uses the ropes to get extra leverage for the BEARHUG, but Dusty elbows him back and chokes Graham with the rope to the point that he hangs Superstar over the top rope. Dusty even bounces Superstar’s face off Vince’s ringside table. Now Graham is busted open. Back in, Dusty delivers several fist drops to the cut wound, but only gets two as Graham is in the ropes. Whoa, Graham is REALLY bleeding now. Dusty elbows Superstar back and uses the ropes for added leverage on the pinfall, but the ref says no. NO HOLDS BARRED, bruh. Graham blindsides Dusty and even though he’s clearly exhausted, he puts an arm across Dusty and gets the three-count. (10:12) After the bell, Dusty drops FOUR BIONIC ELBOWS on Graham thinking the match is still happening. He then knocks Graham to the floor and goes after him. Well, that’s that. This was a bloody violent encounter, but I think I liked the first match better. You could definitely see had Vince Sr. had more control (or been alive) during the national expansion in 1984 that he may have chosen Dusty over Hogan because of the Rocky III thing, but who knows for sure. **

Another match that gets cut from the WWE Network version is Mil Mascaras defeating “DY-NO-MITE” Jack Evans at 8:17 with a flying bodypress off the top.

So since we last left the WWWF, Mr. Fuji and Professor Toru Tanaka have regained the WWWF tag titles by beating Larry Zbyszko and Tony Garea in a “tournament final” match on the October 1 edition of Championship Wrestling in a 2/3 falls encounter where of course the Japanese team cheated to win.

FIRST FALL: Both Tanaka and Maivia kill time early going through their individual pre-match rituals. We see heel miscommunication go wild during a full nelson segment, causing Fuji and Tanaka to not get along. Vince explains Maivia’s tattoos because we are back in a day where only convicts, bikers, and sailors had tats. Meanwhile, Maivia is stuck on the wrong side of town getting choked and his traps clawed. This just goes on for close to ten minutes until he finally escapes and hot tags Strongbow. I’m not joking. TEN MINUTES. If that wasn’t bad enough, Tanaka cuts him off and applies the claw hold some more. Finally, Maivia gets a tag and dropkicks Fuji in to a slam from Strongbow. When Tanaka breaks the pin, he stomps Fuji by mistake. As Fuji goes to confront Tanaka, he takes a dropkick to the back and crashes into Tanaka. Maivia then works over Tanaka, but then tags Strongbow, who goes into the Japanese corner. Once he breaks free and crawls under Fuji, he reaches Maivia for a tag. Can we please get a fall? He makes the mistake of bothering with Tanaka as the Japanese get more heat. Maivia is BLEEDING and once he sees his own blood, he headbutts Fuji THREE TIMES and delivers a running splash to win the first fall at 18:14. Okay, that finish was great.

SECOND FALL: Maivia keeps dishing out headbutts to Fuji, but the ref calls in a doctor to check on him who decides Maivia’s too hurt to continue and calls the second fall for the tag champs at 20:22 total. The crowd is getting QUITE unruly here. They know this is bullshit.

THIRD FALL: A fan jumps in the ring before the start of the third fall, but he’s quickly disposed of by the NYPD. Strongbow has to go in alone here as Maivia is taken back to the locker room. He’s a HOUSE OF FIRE on the Japanese and applies a freaking SLEEPERHOLD in a handicap match. Of course, Fuji jumps him from behind and that’s the beginning of the end. Strongbow gets choked out over in the Japanese corner. Just when it looks to be curtains, Maivia can’t take it any longer and comes running out to the ring with his head bandaged and cleans house on those evil foreigners. The ref then calls for the bell and throws the whole match out. (23:06 total) The ringside doctor, the ref, and even Gorilla Monsoon are at ringside checking on Strongbow. We get the final decision and the ref DQ’s the challengers based on outside interference by SOMEONE ALREADY IN THE MATCH. How is that possible? Naturally, Maivia couldn’t be much more livid and neither could the crowd. Perhaps to make amends, Maivia gets a shot at Superstar Billy Graham next month. That first fall was way too long and dragged, but it got hot ever since that finish and the remaining two falls. *½

Stasiak low blows Putski before the bell and puts the boots to him. As Putski gets away from Stasiak, he lands the POLISH HAMMER which knocks Stasiak to the floor. Once Stasiak stands up, he decides to fight another day and walks out on the match at 2:03. I think it’s time to seek out a new territory, Ivan. You ain’t doing nothing here. ¼*

Final Thoughts: Nope, not even Dusty and Superstar could save this one. Just keep on moving. Nothing to see here, folks. Thumbs down for MSG 10/24/77.