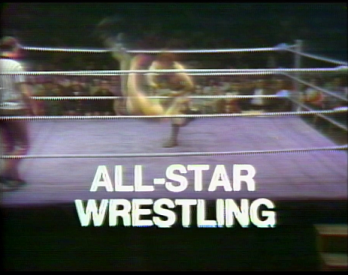 Pop Culture #1s of the Time:
#1 Movie of the Week: Saturday Night Fever starring John Travolta
#1 Song of the Week: How Deep Is Your Love by Bee Gees
#1 TV Show of the 77-78 Season: Laverne & Shirley starring Penny Marshall & Cindy Williams

We start the show with a PSA entitled “Professional Wrestlers Strike A Blow Against Juvenile Diabetes”. Even though is comedy gold, diabetes is no laughing matter. Larry Zbyszko hangs with his tag partner Mike who he clearly just met five minutes before and had already forgot his name. He and Mike are in the fight against juvenile diabetes, but they need our help. How can we help exactly? I have no idea because they never actually say. I guess you will have to

They go through some hammerlock sequences to start. Garea gets away from a deathlock with a chinlock and holds onto that hold for a while. Sharpe counters to a headscissors, but the ref makes him break. Garea does a nice cartwheel and floats around to apply an overhead wristlock. Sharpe counters to a three quarter nelson and tries to get a pin, but Garea bridges out and hiptosses Sharpe over. Back to the headlock. Garea gets shoved off into the ropes for a tackle and dropdown, but goes back to the headlock. They repeat the same process, but this time Sharpe avoids a corner charge and Garea crashes his arm into the buckle. Sharpe works an armbar and sticks with it without actually cheating. Garea gets up and trips Sharpe to escape the hold. He then grabs Sharpe and punches him in the face a few times. Garea lands a dropkick and goes back to the headlock. Sharpe gets an opening with a nice high hiptoss, but he misses an elbow drop. Garea grabs Sharpe for another right hands, but then gets thrown off into the ropes. He catches Sharpe with a sunset flip for 1-2-NO! Garea punches Sharpe down for a one-count. He’s trying to bust Sharpe’s nose open here. Sharpe catches Garea coming off the ropes with a slam right as we reach the ten minute draw. (10:00) Of course, the ref Dick Woehrle awards the match to Tony Garea who gets his clock cleaned by Sharpe. Garea makes a comeback on him and cleans house. We all know who really won though. Is it a little much to call Larry Sharpe a minor league Buddy Rose? **½

York obviously in the twilight of his career with his ’70s dad bod going on here. Backlund is all about joint manipulation way before Bryan Danielson was a thing. Right when I say that, he does the jumping coconut thing where he puts a guy’s head between his legs and jumps up and down. Anyways, Backlund puts York away with the ATOMIC DROP in 4:59.

Vince McMahon talks with Freddie Blassie who is standing by with his WWWF tag champs Mr. Fuji and Professor Toru Tanaka. Blassie says he has them taking special vitamins. Tanaka spills the beans and says its ginseng, but Blassie swears it’s much more than that. They switch gears as Blassie defends Tanaka’s family saying Toru’s uncle is in fact not being indicted for anything. I’m assuming Vince is referring to the Lockheed scandal. As for Fuji’s family, his family has made Hawaii a “very well known place”. Mr. Fuji also comes from the Fuji Bank family and Blassie explains that IBM’s cashflow looks like a drop in the water to the amount of money the Fuji family has. I believe that bank is named after the mountain and not after a family name, but Blassie is obviously just blowing smoke up our butts anyways.

Mascaras twists and ties Frankie up like a pretzel from one end of the ring to the other. He winds up drilling Frankie with the FLYING BODYPRESS to get the three-count in 5:24.

Austin has no luck whatsoever against Patera. He submits to the BEARHUG in 2:29.

Evans jumps DeNucci at the bell, but of course DeNucci fires back with chops and punches. He sneaks in some closed fist punches on Evans because all the babyfaces in the WWF are essentially hypocrites. Evans fights back and grabs the traps. DeNucci wants to low blow Evans, but won’t do it. Dominic fires back and hits a knee lift. As DeNucci comes off the ropes, Evans shoves ref Dick Woehrle into him and gets DQ’ed. (5:46) Evans continues to brawl with DeNucci after the bell until Dominic headbutts him back. DeNucci celebrates with the ref by picking him up in his arms. Weird! ½*