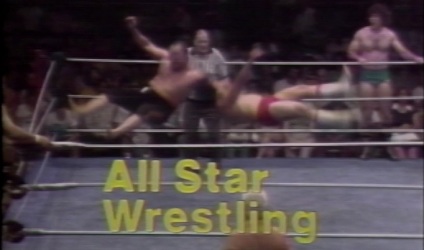 Your host is Vince McMahon. RIP Antonino Rocca. Vince tells us what we are going to see today and then sets up the juvenile diabetes PSA with Larry Zbyszko and his tag partner…Mike.

Albano pretends to jump ropes prior to the bell. He then runs into a left from SD Jones. This is one of those TV matches where you have a babyface team and YOU KNOW who is there to do the job. Austin takes most of the punishment and tags in SD to turn the action around. Jones fires back on Scicluna and Vachon with HEADBUTTS. Austin comes in and covers Vachon, but only gets two. It’s just a matter of time before Vachon double stomps Austin and tags Scicluna to get the pinfall at 5:35.

They lock up and trade headlocks and armbars to start. Wizard is doing all he can to distract Maivia from the floor by running his mouth. Maivia lifts Stasiak and drops him on the ropes to escape an armbar. Stasiak doesn’t care for Maivia’s tactics and starts pummeling him in the corner. He grabs a nerve hold, but Maivia steps through the ropes. Heart Punch gets blocked and that infuriates Maivia as he stomps Stasiak to the floor. Back in, Maivia applies a full nelson, which doesn’t really work that well when you’re a foot shorter than your opponent. However, Maivia fights back and wins a slugfest. He gets too excited though and goes after the Wizard, but then Stasiak jumps Maivia from behind and starts choking him through the ropes. Once Maivia falls to the floor, Stasiak does what he can to keep Maivia out there until Maivia trips up Stasiak and pulls out there with him for a brawl that sets up a double-countout. (7:04) They do a great job never letting these matches get out of first gear to make sure you go see these guys in the arenas, but unfortunately I don’t think their arena matches are all that much better. *½

Freddie Blassie and Spiros Arion are here to talk to Vince McMahon. Blassie blasts on a fat guy in the front row so that Arion can talk about fat guy wrestlers like Gorilla Monsoon or Haystacks Calhoun. Hilarious, VINTAGE Freddie Blassie stuff.

Another week, another handicap match for Arion. He jumps them at the bell and pummels for minutes on end. They get a brief moments to shine, but it’s all Arion. Pete Reeves gets Blassie’s cane stuck in his neck while Arion submits Johnson with the GREEK BACKBREAKER at 4:46.

Vince seems more interested in Joe Turco’s cheap heel tactics than anything else in this match. Turco tries to get a pinfall from a wristlock position down on the mat, but DeNucci bridges up to prevent a three count. As Turco telegraphs a backdrop, DeNucci is able to take him over with a sunset flip for the win at 5:48.

Vince previews the second publication of the WWWF Magazine entitled “Wrestling Action” with Bruno Sammartino on the cover highlighting a big tribute to him within the pages. He also shows us a picture of Andre the Giant and Chief Jay Strongbow inside as well. You can get it for only $2 if you send to a GPO Box in New York City.

Frank Williams from Columbus Ohio actually punches down Fuji and tags in Marcus. Of course, scrony Joe Marcus has no chance. Tanaka chokes Marcus behind the ref’s back because he’s a sneaky Japanese guy. Fuji actually brings Marcus over to Frankie’s corner and instead of tagging in, Williams reaches for Fuji and lets Marcus continue to be stuck in a front headlock. WHAT. Back to Tanaka, he chops Marcus down and aggressively covers him for the win in 4:48.