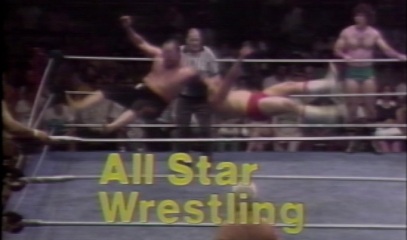 Your host is Vince McMahon. Since we last left All Star Wrestling (which has only been about five weeks), BOB BACKLUND has captured the WWWF heavyweight championship defeating Superstar Billy Graham in Madison Square Garden. Sadly, this match is not featured on the WWE Network and only the finish where Backlund lands the Running Atomic Drop is shown on the History of the WWE Championship DVD set from 2006.

Golden Terror looks like the weird uncle of Los Conquistadores. At least for the Golden Terror, they pin point where he’s from to the “Amazon region of South America” while Los Conquistadores were billed from “somewhere in Latin America”. I honestly have no idea who the Golden Terror is, but he has a fairly competitive hold for hold match here. This is the feature bout of the week. Moving onto the finish, Terror comes off the middle rope and applies a stomach claw. Zbyszko reaches the ropes to get the break. Terror has until the count of five and is not interested in breaking the hold so he gets DQ’ed. (8:05) Not a fan of that finish as it felt like it was about to go somewhere with the Zbyszko comeback, but we got robbed of it. ½*

This is our first look at the Yukon Lumberjacks. They are named Pierre (otherwise known in Canadian territories in the 1970s) and Eric (or Scott Irwin) and they are very TALL. They are a roughhousing team and they do not want to pin their opponent until they are ready to leave. This makes me want to watch some more Irwin brothers work in World Class. Frank Williams gets whipped into the ropes for the DOUBLE TEAM AX CHOP as Pierre covers him for the three-count in 7:39.

Vince McMahon interviews Baron Mikel Scicluna and Butcher Vachon at ringside. They have decided to join forces as a tag team. Vince is surprised at this decision since they are mostly singles competitors. Vachon says they are both part of royal families so it seems a natural fit if you will. Butcher is offended that Vince never seems to want to talk to him even though tons of people in his family are wrestlers. The Baron chimes in and thinks they should start training other wrestlers together. When Vince goes back to his original question about them being primarily singles wrestlers, Vachon smacks him with the facts reminding us he was world tag team champions with Mad Dog Vachon, and if Vince interviewed him more often he would know that. Vince asks them about the top babyface teams (DeNucci/Bravo, Garea/Zbyszko, and Strongbow/Maivia). Vachon and Scicluna issues open challenges to those teams.

Graham is in his late thirties and looks like he should be collecting social security. Just another beat em up. King and Madera are hardly any competition for Graham. He slams one and snapmares the other on top for the three-count in 2:19.

Due to the incompleteness of the tape, we are deprived of Butcher Vachon defeating Frank Marconi while Dino Bravo and Dominic DeNucci beats Johnny Rodz and Joe Turco.

Our next stop will be our first visit to the PHILADELPHIA SPECTRUM which took place on this same day of March 25 1978 with the main event being the WWWF heavyweight champ Bob Backlund facing Spiros Arion. Plus, Bruno Sammartino will take on Ken Patera! All this and more – coming soon.