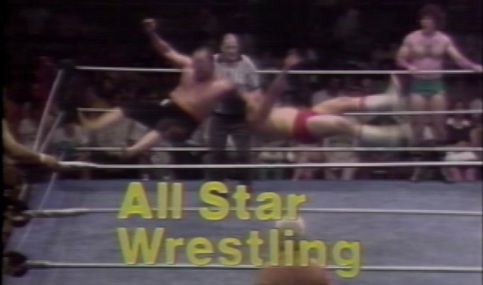 Not working by the hour here, Bravo looks for a quick win over Estrada. He hits some cool power moves that you don’t normally see from anybody but maybe Backlund in the WWWF at the time. Estrada cheats to take control and continues to cheat to maintain control of the match. This only serves to anger Bravo as he hits the Best Dropkick in the Business. The AIRPLANE SPIN puts away Estrada in 5:28.

Frankie is just here to take a total beating from Blackwell. LOVE IT THOUGH. Blackwell is the man. What a great big guy who was ahead of his time. He lifts Williams up off the mat a few times at the count of two, but finally finishes him off with a nice legdrop that makes Hogan’s legdrop look like complete crap at 5:33.

After the break, Vince McMahon meets at ringside with Crusher Blackwell and the Grand Wizard. CRUSHER DEMANDS COMPETITION. He talks about slaughtering pigs back on the farm with his own bare hands. He continues to rant and rave about wanting competition like Andre the Giant and Bob Backlund. When Wizard says Blackwell only wants what is fair, Vince questions the Wizard if he considers what Blackwell does to his opponents as “fair”. Wizard says he’s not responsible for what happens to the opponents because everybody who signs a contract to face Blackwell does so at their own risk. GET THIS MAN SOME REAL COMPETITION.

While it’s the shortest match of the day, it’s too much TV time for Graham. Vince decides to start talking about High Chief Peter Maivia turning on Bob Backlund last week on Championship Wrestling. Graham finally puts away Ringo with the falling thumb drop off the ropes in 5:18.

Wow, Johnny Rodz getting a feature match here. He and Russo keep King on their side of town for the opening moments. Jim Ray gets a “hot” tag, but a headbutt lands him on his butt instead of Rodz. King gets another shot at the heels, but his chances of taking control are few and far between. Rodz gets cornered as King tags in Ray. Jim Ray asks the crowd if he can stomp Rodz and does so. Tag to King, he telegraphs a backdrop and gets his mouth kicked by Rodz. A suplex and a pair of fist drops end King at 6:02.

DeNucci starts the match with Stasiak for some mat wrestling. Arion rattles DeNucci by grabbing his tights from the apron. As DeNucci gets cornered, Scicluna tags in and applies a front headlock. Gorilla Monsoon joins Vince McMahon for commentary to discuss Peter Maivia’s behavior. He mentions Freddie Blassie has entered the picture and wants to buy Maivia’s contract. First he turned Spiros Arion, next Victor Rivera, and now Peter Maivia. Monsoon explains that the only reason Blassie cares about Maivia is because the money he knows he can make with him. How does Blassie compare to Bobby Heenan in the WWF? Both billed from LA. Both very intelligent managers. Both capable of turning good guys into bad ones. Back to the match, Zbyszko goes crazy on Arion. Tag to Stasiak, Larry Z delivers a hiptoss out of the corner and applies the ABDOMINAL STRETCH. In comes Dominic to battle Scicluna. Wonder how many times these two have met? As DeNucci gets triple-teamed, Garea and Zbyszko come in hoping to help out. With DeNucci continuing to be triple-teamed, ref Dick Woehrle calls for the bell to DQ the bad guys. (7:48) Too much DeNucci for my tastes, but whatevs. ½*