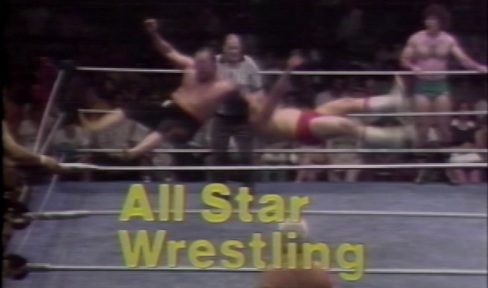 Garea starts off with overhead wristlocks and waistlocks to start, but Graham feels we aren’t bored enough and decides to grab a cobra clutch. Graham instead decides to hammer down Garea and choke him and thumb him in the throat. Garea comes back with a hard whip into a corner and grabs hold of a headlock. This is all to allow Graham to sneak something from his tights and jab Garea in the belly to break the hold. Graham chokes Garea around the ring until Garea battles back with punches and whatnot. They brawl to the floor where they are then counted out. (7:26) I would say whoever decides to give Luke Graham this much time every week is actually the crazy one, but that’s just me. ½*

This is our first look at Peter Maivia on All Star Wrestling since he grew a mustache and joined the dark side. Steve Cooper probably wishes he was anywhere else right now as Maivia kicks his butt with aggressive brawling offense. Cooper’s punches have no effect and he takes a headbutt for his trouble. Maivia picks up Cooper on his shoulders and drops him throat-first on the top rope to get the pinfall in 3:45. Not competitive whatsoever – as it should have been with Maivia working against Bob Backlund in MSG for the next several months.

Vince McMahon meets with Freddie Blassie and “High Chief” Peter Maivia for an interview at ringside. Blassie says because Maivia doesn’t have too much of an education, Arnold Skaaland and Bob Backlund used him. He mentions that Skaaland and Backlund let Maivia do all the work when they were teaming together and took all the money – or shekels as he calls them. Blassie helped Maivia see the light and here we are today. Maivia then gets time to talk and says he helped Backlund remain champion. He feels Backlund kept him as a friend so he wouldn’t have to face him in a title match. They continue to sell us all on an elaborate backstory that isn’t possibly true about Maivia training Backlund as an amateur. Blassie continues to claim that Backlund and Skaaland had Maivia do all the work and they took all the money. Vince then figures we have run out of time and we leave it there for now.

Not sure what makes him a “fireball”, but whatever. He works the TV tapings for one weekend and he’s done in the WWWF. But hey, he can say he’s been in the ring with Ivan Koloff, Peter Maivia, and Crusher Blackwell. CAN YOU SAY THAT? No, you can’t. Robinson cranks on a headlock 70s style. Even Bruno isn’t convinced this is doing any damage to Ivan. Just as he says this, Koloff picks up Robinson and throws him away. Koloff delivers a BOMBS AWAY and starts working the leg. Even Albano cranks on the leg while in the ropes. Another BOMBS AWAY and Koloff applies a standing figure-four for a submission victory in 4:36.

Bravo outwrestles Coleman at every juncture (heard too much Vince commentary). He works a spinning toe hold as Bruno tells us how impressed he is with Bravo. Armbars and hammerlocks follow. Coleman comes back choking Dino, but that just pisses off Bravo. Time to go home. Dino levels him with the Best Dropkick in the Business to set up the AIRPLANE SPIN for the win in 5:15.

Not for sure if this is a title match or not. It feels like we haven’t seen the tag champs in a while. They are just weeks away from losing to Tony Garea and Larry Zbyszko anyways. Eric and Zbyszko start us off here. The story turns to the lumberjacks damaging Larry Z’s leg, but it’s short lived as Zbyszko reaches SD for a tag. He HEADBUTTS Pierre and grabs a front headlock. Pierre backs SD into the ropes and Albano helps out to allow the lumberjacks to take control. They work over SD a little bit, but then SD punches back on Eric and tags Larry Z. Zbyszko goes HEADLOCK CRANK CRAZY on the lumberjacks. SD Jones does more of the same. At one point while Zbyszko holds Pierre in place, SD HEADBUTTS him and catches him coming off the ropes. In comes Eric, he corners SD, but SD reverses a cross corner whip for a nice bump. He still manages to tag Pierre. SD nails him with a HEADBUTT, but misses a corner charge and Pierre covers SD for the win. (5:14) Well, that was abrupt. Not a whole lot to see here as SD and Larry Z are just thrown together this week. ¾*