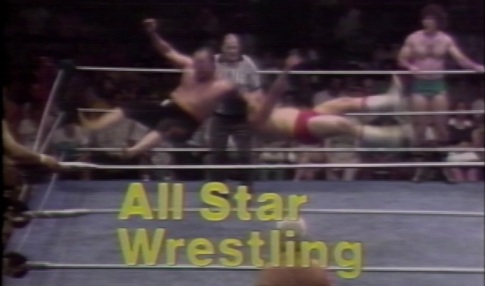 Your hosts are Vince McMahon and Bruno Sammartino. Gary Michael Capetta makes his All Star Wrestling debut (as far as we know) replacing Joe McHugh on the “B” show. With Championship Wrestling moving from Philadelphia to Allentown, McHugh would continue with his ring announcing duties as part of that program.

Jones is all about the headlock to start. To escape, Russo picks him up and delivers a shinbreaker to start going after the leg. SD counters with a spinning headscissors, but still sells the leg. I like it. As Russo returns to the leg, Jones surprises Russo with another headscissors. Oh come on, Tony. While they are on the mat, talk turns to Bruno confessing he’s not retired from the ring and we can expect to see him at arenas everywhere. Russo is still working the leg and doing a great job of it. Finally, Jones reverses a corner whip as he’s hobbling and delivers a HEADBUTT to end Russo in 5:29.

Gee, we really have some fresh talent in Mike Paidousis who is about 55 years old here. I’ve seen some results of him facing the Scott brothers and the George Becker-Johnny Weaver team in the 1950s and 60s here in the Carolinas. He’s that “experienced”. Masters is still green, but he’s got a good body. He tries to keep Paidousis on the mat with hammerlocks and chinlocks. Paidousis tries a headlock, but Masters is back on top with a hammerlock. However, Paidousis refuses a snapmare and it gets awkward. Back to the center of the ring, Masters misses a charge and goes rolling into the ropes. What a dick. They do a test of strength where Masters tries a standing dropkick, but Paidousis NO-SELLS. Are you serious? Paidousis delivers a hammerlock takedown and keeps Masters there for a while. Masters legit has to kick his way to the ropes for a break. Masters grabs a wristlock and tries to jump down onto the elbow, but Paidousis ain’t selling that either. Paidousis takes him down to the mat and grabs a front headlock, but Masters counters to a hammerlock. Masters tries to jump down on the elbow again, but Paidousis won’t take the move. HE REFUSES TO TAKE THE MOVE. Paidousis shoves off a headlock into the ropes and backdrops Masters. He sharply knee drops the chest and covers him for the three-count. (5:38) That might be one of the most awkward matches I’ve seen. Holy crap. ½*

Vince McMahon meets with Freddie Blassie and “High Chief” Peter Maivia at ringside. Blassie says he stands for class. He flashes his new 10 karat diamond ring. Blassie claims to be the Liberace of wrestling because of how much class and finesse he has and not because of the other thing. He makes fun of Vince’s suit saying he wouldn’t wash his Lincoln cars with it. Maivia says he’s making more money than ever thanks to Blassie. Blassie then runs down Backlund and Skaaland, whom Blassie thinks is just a cheap skate. He says Maivia is the next Heavyweight Champion. Vince claims all of the top baby faces want a shot at Maivia, but Blassie says nobody ever signs up to wrestle the High Chief. Blassie closes the promo by making fun of Chief Jay’s nose – because why not?

Let Us Take You Back: Madison Square Garden, 6/16/75. Bruno Sammartino meets Waldo Von Erich. Before they show the match, Bruno claims to have had a broken arm going into the match, but refused to back out of the match due to the fans expecting to see him defend his WWWF championship.

Two months earlier in MSG, the neo-Nazi Waldo Von Erich attacked Chief Jay Strongbow from behind as the match started and threw him over the top rope to the point he couldn’t continue. Concerned for his friend, Bruno came down and attended to Strongbow taking him backstage. One month earlier, Von Erich gets his shot at Bruno and the match was stopped due to Bruno bleeding so much. How he got busted open and how bad it really was, I don’t know. Nevertheless, they stopped the match because of too much blood. Now here we are and naturally BRUNO IS PISSED. You don’t want Bruno pissed at you because it means curtains for ya. CURTAINS, I say. Waldo Von Erich is billed as the European champion. Most likely a faker than fake championship to give him that instant credibility with the fans. Anyways, the crowd is ready to see Bruno kick some Nazi butt and go home. Waldo attacks Bruno’s “broken arm” with the belt and then uses a spike from Blassie’s shoe and stabs the arm. Once the ref gets the spike away, Bruno uses his good arm and runs Waldo from corner to corner beating the crap out of him the whole way. Von Erich rolls out and back in, he jumps Bruno again. Waldo whips Bruno into the ropes and telegraphs a backdrop, but Sammartino knees Von Erich in the head and covers him for a three-count. (4:12) Bruno continues to stomp the Nazi out of Waldo after the bell. His arm is bleeding from the attack at the bell. Not a very satisfying match, but they got the match in the ring, and the crowd was loving it. Did Bruno really have a broken arm? WHO KNOWS. It’s the “not really knowing” the truth that makes wrestling fun sometimes. In 2019, everybody has to know everything and the wrestlers are too close to the fans thus robbing them of things like this. It’s not that I think people should pretend wrestling is 100% real, but it’s the not knowing whether what they are seeing is real or fake sometimes makes it fun. If Bruno’s arm was really broken, kudos for getting in the ring. You’re a better man than I. ½*

Back at the Hamburg Fieldhouse, Bruno talks about how the month prior in MSG that Waldo Von Erich had beaten him with a chair to make him bleed. This was an effective way to put over the claim they made that Bruno isn’t retired and a reminder that he’s one tough dude.

Another match spliced in from a different show. They got a lot out of that one TV taping for Ladd. McMahon mentions that Ladd outweighs Lavdas by almost 100 pounds, which should tell you how well this match goes for Lavdas. Ladd hits the BOOM DROP, but picks Lavdas up off the mat at the two-count. He then stands Lavdas up and the taped thumb goes right into the throat of Lavdas to give Ladd the win in 3:13.

This is our last look at Dino Bravo in 1978 as he’ll return to the Carolinas before making the AWA his home until he returns to McMahonLand in 1985 where he will be a much different Dino Bravo. Dino is all waistlocks and headlocks to start, but Graham wants to play dirty. Vince mentions that the ref is Tony Altimore who was in a heel tag team called the Sicilians with Captain Lou Albano back in the 1960s. Bravo grabs a spinning toe hold, but Graham is in the ropes. He puts Graham back on the mat and pulls back on his legs. Grand Wizard whispers some advice to his man, but it doesn’t seem to much matter. Bravo puts Graham down in an armbar. Dino just does not seem to be having any trouble with this nut bag. With more advice from the Wizard, Graham grabs a headlock and jabs Bravo in the throat a whole bunch. He keeps Bravo cornered and disregards the ref’s instruction until he’s ultimately DQ’ed. (7:05) They fight out to the floor where Bravo runs Graham into the ringpost. He then runs the Wizard away and continues to beat on Graham to end the show. If any match should tell you why Luke Graham isn’t worth being in the feature bout or given seven minutes, this is it. ½*