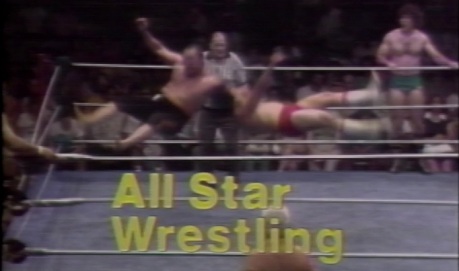 Pop Culture #1s of the Time:
#1 Movie of the Week: The China Syndrome starring Jane Fonda, Jack Lemmon, and Michael Douglas
#1 Song of the Week: I Will Survive by Gloria Gaynor
#1 TV Show of the 78-79 Season: Laverne & Shirley starring Penny Marshall & Cindy Williams

Jack Evans is Mr. X under the hood. He’s got a zebra-style hood there. Mr. X shows he has the power advantage to start as he backs Zbyszko into the ropes and the corner during a tie-up. After X gives him a cheapshot, Zbyszko reverses a cross-corner whip that jars the back. Mr. X grabs a headlock. Zbyszko shoves him off into the ropes and takes a few shoulderblocks, but catches him for a slam. Another headlock takedown by Mr. X. Zbyszko gets to his feet and they trade armdrags, but Zbyszko reverses anything else into a headscissors on the mat. Mr. X escapes and grapevines the legs. Once Zbyszko counters, they exchange some hiptosses. Vince and Bruno discuss how important having a strong back is in wrestling. Mr. X pounds on Zbyszko and delivers a clothesline, which you don’t see a lot in these days. Zbyszko ducks a second one and returns the favor for two. He then goes for the mask, but Mr. X rakes the face to get Zbyszko to stop. After some turnbuckle smashes, X grabs a chinlock and then tears at the nose. X delivers a suplex, but he’s slow to cover for only a two-count. Now Zbyszko is getting MAD. He punches back on X and hiptosses him across the ring. After a backdrop, Zbyszko puts him in a crucifix for the three-count. (6:30) Not a bad little back and forth match there. *½

Vince and Bruno look at photos of the ambulance carrying Chief Jay Strongbow away after having his leg broken by Greg Valentine. I mean, Strongbow looks like death warmed over in these pictures. Some nurse is checking his blood pressure. IT’S A BROKEN LEG. Come on. Bruno warns Valentine that he should leave the area because Strongbow will return.

Putski really cranks on a headlock to start. He then takes Schmidt from corner to corner smashing his face on a turnbuckle. Putski shows off with an arm lock takedown. He switches over to a deathlock. Schmidt throws some weak punches so Putski starts throwing him around. The POLISH HAMMER ends everything in 3:08.

Afterwards, Vince McMahon meets with Ivan Putski at ringside. Putski says he’s been working out with Bruno and he’s been learning some new technical moves which we saw in his last match. Talk turns to Bulldog Brower. Putski can’t wait to get his hands on the bully Bulldog Brower. He says he’s not afraid of Brower and that Brower is a yellow dog. He’s getting tired of Brower hurting younger wrestlers and if Brower wants to beat on someone, come beat on him. Vince brings up Greg Valentine and what he’s done to Chief Jay Strongbow. Putski dares Valentine to try to put that Figure-Four hold on him. Anytime. Anywhere. If no one is going to make Valentine pay for what he’s done, Putski can do it. McMahon says it would be curtains for Putski if Valentine gets the hold on him, but Putski promises Valentine will never get the hold on him. He’s one determined dude. POLISH POWER.

Brower rabbit punches and headbutts and throws Darrow to the floor. He then runs Darrow into the post. Crowd wants Putski. Brower hates loud noises and freaks out. Back in, Darrow applies an arm wringer, but Brower fights back and puts the boots to him. He grabs a front headlock, but the Putski chants get him distracted. Darrow comes out and applies the arm wringer again, but Brower punches him down. Brower throws him to the timekeeper’s table and stomps him and then throws him out to Albano. Back inside, more jabs from Brower. He gets tossed out to Albano, but once again Albano throws him back in the ring. He delivers a BOMBS AWAY to the shoulders, but won’t pin the man. He comes off the top rope again down on top of Darrow and finally decides to pin him in 5:21. Darrow is hurt so bad that the ref calls for a stretcher. Somewhere I bet Putski is FUMING mad. While the refs try to carry him out of the ring, Brower kicks him off the stretcher sending him flying through the ropes to the floor. AWESOME. Brower then jabs the stretcher into Darrow’s shoulder. Albano takes his man Brower and then heads for the locker room. BROWER POWER.

You will know Coage best as Bad News Brown. Of course just three years earlier, Coage represented the United States in the 1976 Olympic Games and won a bronze medal in men’s judo, so this is still very early in his wrestling career and the first push of any kind that he’s had. Blassie yells something to Gary Michael Capetta and then Capetta says Coage is from Tokyo, Japan. So if Blassie only represents people from outside the United States, do you have to MOVE outside the country for him to be your manager? Of course I kid. Bad News Allen spent quite a bit of time in New Japan throughout his career. Anyways, Coage has a full head of hair and that’s the first time I’ve seen that. They trade some hiptosses of course to show off the judo skills. Coage gives Garea a huge slam, but Garea fires back with the same. Coage rakes the face and starts pounding the body of Garea. He’s already got the fingerless glove on his right hand. However, he misses a corner charge and runs his shoulder into the buckle. Garea gives him a hiptoss and knees the shoulder. Garea tries a keylock, but Coage headbutts him away. That seemed to work so Garea headbutts him again. Big Wahoo chop and a knee drop gets two on Garea. They slug it out on their knees. With Coage stunned, Garea lays in some elbows. As they get back to their feet, they continue to beat the crap out of each other in the corner past the five count and several warnings from ref Dick Whorle to get DQ’ed. (7:12) That was fantastic. Coage showed some real cockiness and personality looking like a star. Of course, Garea was his usual uninteresting self, but he came to fight. **½

Curry gets cornered and double-teamed by Scicluna and Rivera for the first couple minutes. However, Curry fights back and gives Rivera a couple armdrags before he’s back on the apron. Scicluna hammers the shoulder and grabs an armbar. He pulls the hair to take Curry down. Tag to Travis, he’s quickly taken over to the Blassie corner as well. Rivera applies a front facelock and sticks his thumb into the throat of Travis. We get a false tag spot and Travis gets hammered by Scicluna and Rivera. Curry gets the crowd going, but Travis is still going nowhere. Another false tag spot. Scicluna slams him a few times, but can’t get the three-count. Travis counters a third slam into an inside cradle and gets the upset win. (5:38) Not very good, but a win’s a win. ¾*