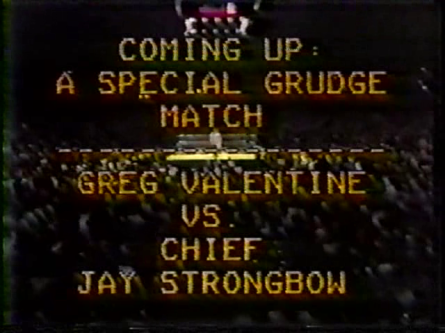 Your hosts are Vince McMahon and Dick Graham. They discuss the big revenge match between Chief Jay Strongbow going against the guy who broke his leg: Greg Valentine.

They shake hands to start as Rodz is under the assumption that Tito thinks this is going to be a clean match. Anyways, Rodz hiptosses Santana and struts around like this match is going to be cake. He hammers Tito into a corner and chokes him in the ropes. More punches and kicks follow from Rodz. After one high kick, Santana catches the second one and starts working the knee. Rodz goes to the eyes to put a stop to it. He connects with a couple high kicks and delivers a kitchen sink knee. Santana fires back and really lays in the punches. He grabs a chinlock to get back to wrestling, but Rodz pulls the hair to escape the hold. They take turns getting nearfalls off a sunset flip, but then Santana catches Rodz with the Crossbody Block for the three-count. (9:37) Rodz is a good heel worker and knows how to make those babyfaces get some love from the crowd. Good match with lots of energy. You can tell Philly is already liking what they see out of Tito. **

Legendary Philadelphia sports announcer Dave Zinkoff splits the ring announcing duties with Gary Michael Capetta. Weird heel versus heel dynamic, but I’ve noticed lately on TV that they seem to be trying to turn Estrada. Scicluna controls much of the match with pounding and chokeholds and whatnot. To cut off a comeback, Scicluna catches Estrada charging him in the corner and rolls him up for the win. (5:22) Nothing much here. Moving on. ½*

No heat for this one either. They play around with headlocks and such for a while. Jones complains about the referee’s cadence which seems unlike SD Jones. Things get a little heated, but these two can’t really deliver. Jones drills him with a pair of HEADBUTTS for the win. (4:58) Kind of a mess, but a little more entertaining than the last match. Jones and Mascara shake hands after the bell. ¾*

Unless I’m mistaken, this is their *first* televised match since Valentine broke his leg back on March 3 on Championship Wrestling, so this is what Philly came to see. They are giving each other SERIOUS looks and building the tension. Vince is orgasming over the look Valentine has on his face, which just seems like a normal expression for a guy like Valentine. He jumps Strongbow as he comes through the ropes and goes right after the injured knee, but Strongbow starts smashing his face on the knee brace. THAT’S RIGHT. Valentine bails out. He comes back inside only to get his butt beaten some more. Strongbow grabs a mic stand from the announce table and busts open Valentine. AWESOME. More head smashing on the knee brace. It’s simple yet effective and tells the story this match should tell. Strongbow even breaks a stool from ringside over Valentine’s head. This is some of the best fire you’ll see out of Strongbow. Valentine finally gets some time to wear down the leg. He even applies the FIGURE-FOUR (which is a finish he had stopped using to save if Strongbow returned), but Strongbow chops Valentine on the top of the head to escape. Strongbow telegraphs a backdrop and takes an elbow to the head, but then Valentine misses the elbow drop finish. They exchange blows with one another. As Strongbow goes on the WARPATH, Valentine dumps him over the top rope. Valentine gets pulled out to the floor and gets his head bounced off the guardrail. Strongbow threatens him with another stool as they head back inside the ring. As they trade shots on each other for a few more moments, they double-KO at one point and fall out to the floor. Valentine makes it back inside, but Strongbow just misses the ten-count. (11:13) WHOA. If you ever wanted to see an enjoyable Chief Jay Strongbow match, this is it. Weak finish, but hell of a revenge match with blood and guts. Great simple storytelling as well. Makes me wonder more about the matches from the Wahoo McDaniel feud. ***¾

Graham wonders what would happen if Brower ever met George “The Animal” Steele. WHY. Don’t give these guys any ideas. When Brower tires of an armbar, he bites and claws at Rivera before throwing him to the floor. Back inside, Rivera makes a comeback and grabs a chinlock for minute after minute. Eventually, Brower low blows his way out and delivers a backbreaker to set up the BOMBS AWAY knee drop for the win. (13:14) A real snoozer. ½*

Johnny Valiant SMACKS Backlund to get this one started. The Valiants end up bailing to chill things down. Back inside, Backlund sends Johnny V taking a powder with an armdrag. While Jerry watches on, he gets flipped into the ring as he gets tied up in the ropes and punched by Backlund. Once he’s freed, Jerry misses a punch in the corner and turns around into an armdrag. Jerry tries to corner Backlund on the Valiants side of town, but Backlund refuses to let that happen. Some classic heel tag team stuff from the Valiants trying to draw Backlund into their web. Johnny V gets the better of Backlund trying a backdrop as the Valiants finally get their chance to take control. Backlund surprises Jerry with a flying headscissors and armdrags him again before tagging out to Putski. He comes in a HOUSE OF FIRE and whips Jerry into a corner to send him crashing to the floor. Back in, Putski delivers a backdrop and grabs a headlock. He lets Jerry tag Johnny just so he can give them a DOUBLE NOGGIN KNOCKER. Johnny gets the crap kicked out of him, but Putski runs into a knee in the corner to slow things down. Back over to Jerry, they do a false tag spot to allow more double-teaming on Putski. Backlund finally gets a tag and applies an abdominal stretch on Jerry, but Johnny breaks up the hold. As Backlund is running the ropes, Johnny pulls the top rope down to send him falling out to the floor. Backlund was moving so slow that it looked like he could have prevented it from happening, but didn’t. On the floor, Johnny runs Backlund into the post to bust him open. The ref then decides the cut is so bad that Backlund can’t continue and calls for the bell. (13:35) Lots of fun here. This sets up a WWF title match for next month between Bob Backlund and Luscious Johnny V. Putski wants to fight both Valiant brothers by himself. It looks like the ref is going to allow this to happen. **½

He runs wild on the Valiants, but gets double-teamed when Putski grabs the bearhug. Together, Johnny and Jerry drop him on the top rope. Johnny pushes the referee around until Bob Backlund returns with his head wrapped to run off the Valiants. (15:41 total) Since it was just supposed to be Ivan Putski against the Valiants and Bob Backlund “interfered”, the tag champs win the match by DQ on a technicality. N/R

We’re left with the matches nobody really cares about here. Hussein jumps DeNucci from behind, but then DeNucci kicks away a backdrop and chokes Hussein with his headdress. He tries twisting on the knee, but Hussein catches DeNucci trying a backdrop himself and elbow drops him for the win. (2:51) Quick work of DeNucci tonight. ¼*

Valiant pulls out a foreign object before the bell even sounds. Travis blocks the blow and spends much of the match making him pay by working the left arm. Moving on, Valiant catches Travis with a clothesline and boy does he sell it. Valiant covers him for the win. (6:03) Man this match sure did run into a locomotive. ¾*

It seems to be a recurring tonight, but heel Pat Patterson jumps DiBiase as he comes through the ropes. DiBiase blocks a title belt shot and punches Patterson back. He slams Patterson to give him enough time to take off his jacket. DiBiase goes for the leg and even drags him over to wrap the knee around the post. Back inside, DiBiase returns to twisting on the leg. He slams Patterson’s knee to the mat and that causes Patterson to take a powder. Back in, he bars the knee until Patterson rakes DiBiase’s face. Patterson blocks a charge and knocks DiBiase through the ropes to the floor. He tries to keep DiBiase on the floor and lets him back inside so he can choke DiBiase. Patterson slams him and heads up top, but DiBiase is there to crotch him to bring him back down to the mat. DiBiase is FIRED UP. He hits a backdrop and the elbow drop for 1-2-NO! There’s the Abdominal Stretch, but Patterson rakes him in the face to break the hold. DiBiase surprises Patterson with a sunset flip and catapults him into the corner for 1-2-NO! Patterson gets his feet on the bottom rope. There’s the Powerslam from DiBiase, but Patterson lands with his feet in the ropes. I love how Chief Jay Strongbow bloodying Greg Valentine with a mic stand and a stool is fine, but those rope breaks have to be taken seriously. He buries his knee into the back of Patterson, but then misses a corner charge. He’s holding his guts while Patterson rolls him up with a handful of tights for the three-count. (11:34) These two had some good matches together and I’d imagine Patterson helped in making DiBiase that much better. **½

Final Thoughts: Like most of these WWF house shows, lots of crap mixed in with some hidden gems. There’s lots of heat for like three matches and the rest are pretty bad. If you can get your hands on Strongbow and Valentine, check it out. The Backlund and Putski match against the Valiants is fun, too. That’s about all I have to say.