Wrath continues his aggressive ways against Hammer. This needs to be kept short though. Russian legsweep by Hammer gets two, but then Wrath tosses him to the floor for some ringside violence. Back inside, Wrath hits the flying clothesline for two. Hammer mounts a comeback and delivers a ten-count corner punch. WHY. Isn’t Wrath a babyface? Powerslam by Hammer scores another nearfall. Wrath sees a backdrop coming and hits the MELTDOWN for the win in 3:12.

We get about ninety seconds of actual footage from the Halloween Havoc PPV involving the Fit Finley versus Alex Wright match.

Wright is worried after Finley gives him a good elbow to the nose. He shows off with a wristlock escape and hiptosses Finley over. Wright fires back with European uppercuts and hangs Finley out to dry on the top rope. Finley wakes up after a turnbuckle smash and connects with a short-arm clothesline. On the mat, Finley bends on the knee into a VERY uncomfortable position. Wright hobbles out to the floor only to have his leg wrapped around the ringpost. Back in, Finley tries to break Wright’s leg with a standing figure-four. Next thing we know, Wright cartwheels away from a backdrop and catches Finley with a jumping forearm. HUH? Finley sidesteps a charge and Wright goes flying over the top rope to the floor. After a battle on the apron, Wright snaps Finley’s neck on the top rope and delivers a Missile Dropkick that hits Finley and knocks him into ref Nick Patrick. Oh boy. When Wright helps up Patrick, Finley grabs Wright for a TOMBSTONE PILEDRIVER to get the win. (6:01) So the intense leg work meant nothing? Alright then, so now what do we do with these two guys? *½

They take us back to Monday Nitro on 10/26 where Scott Steiner and Buff Bagwell attacked JJ Dillon for thinking Dillon screwed Steiner over at Halloween Havoc.

You don’t need a reason to see Malenko and Guerrero lock-up – and there’s certainly not one here. After wearing sunglasses to the ring, Tony calls out Eddie’s black eye. You’re left wondering what the black eye is all about. There’s some VINTAGE Malenko and Guerrero mat exchanges before we go to commercials. When we come back, Malenko delivers a nice powerslam for two. Eddie escapes a chinlock and springs off the ropes for a headscissors for two. Drop toehold and dropkick to the side of the head by Eddie connects. Malenko fights back with a vertical suplex for two. Back to the chinlock, but Guerrero escapes with a back suplex. Malenko reverses a whip and launches Guerrero to set up the Texas Cloverleaf, but Guerrero slides across the mat and makes it to the floor. Back in, Eddie drops to his knees and begs for a handshake. Yeah, Dean won’t fall for it. He hammers Guerrero in the corner and connects with a back elbow for two. Back to the chinlock again. Guerrero makes the ropes and knocks Malenko down to set up the Hilo. He lets the fans know what he thinks about them and hits the Brainbuster. Due to Eddie taking his sweet time, Malenko stops him up top and delivers a superplex. Both men are down! Once Malenko is up, Eddie yanks him out to the floor. Guerrero follows him out for some guardrail action. Back inside, Guerrero finds a headscissors to take back control and applies the GORY SPECIAL into a pin for 1-2-NO! They go back and forth with nearfalls. Malenko starts getting PISSED and stomps the crap out of Eddie Guerrero until the Latino World Order have seen more than enough and attack Malenko for the DQ. (9:30) Chris Benoit and Steve McMichael make the save and toss the LWO boys out of the ring. **¾

Mike Tenay takes over for Lee Marshall. Disco dares Jericho to show him – a two-time TV champ – some respect by forfeiting the TV title to him and putting it around Disco’s waist. He turns his back on Jericho waiting for the belt. Instead of whacking him from behind, Jericho puts the belt on Disco – and then beats the shit out of him. When Jericho finally does go to whack Disco with the TV belt, ref Nick Patrick grabs it away from him, allowing Disco to rush him from behind. He gets a few quick nearfalls, but Jericho takes a powder out to seek the comfort of Ralphus. Back in, Jericho hotshots Disco to slow him down. C’MON BABY gets two. Jericho comes off the top rope and eats a boot, allowing Disco to mount a comeback. The atomic drop and clothesline combo gets two. He connects with a flying elbow smash. Disco looks for the MACARENA DRIVER, but it takes too much time. Too much set up! Jericho counters to a LIONTAMER for the tapout. (5:35) Jericho and Disco individually are on a roll as far as good matches go. **½

GET YOUR WCW MASTERCARD TODAY!

Chavo makes sure to see that Pepe gets a nice view for the match. Waistlocks are exchanged to start. Guerrero finds a tilt-a-whirl headscissors and a dropkick to send Kidman rolling as Chavo rides Pepe around the ring. Back in, Kidman finds a slingshot headscissors and stomps Chavo down in the corner. Rebound clothesline and an elbow drop gets two. The slam and a slingshot legdrop connects. Kidman grabs a chinlock on the mat. Chavo escapes and hits a dropkick. He applies a chinlock and gives Kidman a “wet willy”. Kidman elbows out, but gets caught with a bridging German suplex for two. Chavo lands a slingshot splash for two. Kidman fires back with a HIGH flying body press for a nearfall. Chavo floats over Kidman in the corner and rolls him up for two, but then charges into a BK Bomb for 1-2-NO! Chavo catches Kidman with a knee and lands a springboard bulldog for two. He grabs Pepe and does a cabbage patch dance for some reason. As he goes to set Pepe back in the corner, he fights off Kidman and delivers a flying sunset flip (with Pepe still in his hands), but Kidman kicks out and cradles up Chavo for the three-count. (7:58) Three good matches in a row on this episode of Thunder. I think that’s all to come to an end here. **½

As Kidman leaves, the LWO head down to the ring. Eddie talks to his nephew Chavo and tells him he’s not cutting it. If you’re a Guerrero, you should ACT like it. Chavo puts his hand on Eddie’s shoulder and he gets attacked by La Parka and Psychosis. DANG BRO. Eddie tells Chavo that he has to earn his LWO colors – even though he’s family. Chavo tries to get over the Pepe World Order – the PWO.

GET YOUR nWo WOLFPAC “RED WOLF” T-SHIRT FOR ONLY $20 BUCKS!

They take us back to Monday Nitro, 10/26 when Warrior got his revenge against nWo Hollywood.

Miller reminds Villano V – AND THE WORLD – that his hands are registered lethal weapons. Villano V is given five seconds to leave, but Villano LOVES the number five and won’t leave. He takes some kicks to the face, but Villano takes advantage and hits a standing senton for two. The FELINER catches Villano V out of nowhere for the win. (1:48) As he picks up where he left off telling the crowd what a bunch of nobodies they are, SONNY OONO comes down. Miller calls him a midget and he’s ready to fight. Oono sees dollar signs with Miller and whips out some hundred dollar bills. Miller quickly shuts up and leaves with Sonny Oono to end the segment.

Armstrong gets the better of Hall to start on the wrestling side of things. He jacks Hall’s jaw to make him mad and it’s all downhill from there. He gives Armstrong one OUTSIDER’S EDGE after another for the win in 3:28.

They take us back to Monday Nitro, 10/26 to show how DDP defeated Bret Hart to regain the U.S. title.

Raven doesn’t seem to want Kanyon in his corner tonight, but Kanyon wants to be there for his buddy/master. While I have no idea why these two are fighting on this particular show, it’s pretty wild to think both these guys will be wrestling each other in 2001 for a WWF singles title that doesn’t even exist yet. Raven bumps around for Giant and as they go to the floor, Kanyon provides some distraction. Raven baseball slides into the Giant and tries a pescado, but gets caught. Giant looks to send Raven into the post, but Raven shoves him off into the post instead. Kanyon hands Raven a chair who waffles the big man TWICE. Now Kanyon slides a table into the ring and Raven sets it up. As Giant gets in the ring and walks over the top rope, Kanyon grabs his leg while Raven pulls up on the top rope to crotch him. OUCH. He wants to put Giant on the table, but Giant goozles him and CHOKESLAMS Raven through the table instead. Giant puts his knee on Raven for the pinfall. (2:56) Ah, that’s why this match was happening. Raven’s losing streak continues. *½ 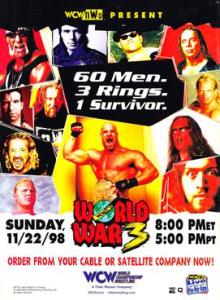