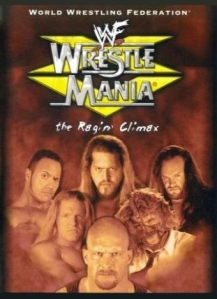 WWF Hardcore Title: Billy Gunn vs. Hardcore Holly vs. Al Snow (w/Head).
Holly is insanely over at this time with the crowd. Holly suplexes Snow on the outside. Snow beats down them with a hockey stick. Gunn thumps him with a food-tray and then breaks a stick over Holly’s back. Snow goes low on him with the broomstick and does some kung-fu stuff. Snow nails Holly with a broomstick and beats up Gunn. Al takes Head and nails both guys. He places up a table in the corner. Holly sends Snow through the table. Gunn hits Snow on the chair with his finisher. As Gunn is pinning Snow, Holly nails him with a chair, and pins Snow himself @ 7:06. Defiantly not a masterpiece, but had some fun spots and got the crowd into it. Not the worst way to start off the PPV,but not the best either. It was funny that everyone who held the hardcore title, which had no credibility, got over immensely with the crowd. * ½

The Tag Titles here meant less than they did now, and they wouldn’t pick up until Edge, Christian and the Hardy Boys came along. D’Lo goes for the Powerbomb, but Owen comes off the top and missile dropkicks him. Jarrett rolls into a jackknife for the win @ 3:58. Four minutes for a tagteam match on Wrestlemania!? Give me a break. At least they tried to pack as much as they can in such little time they had, but they couldn’t do that much in four minutes. * ¼

Brawl For All: Butterbean vs. Bart Gunn.

Butterbean catches him with a solid right and stubbles him. He tilts in and knocks Gunn down. Gunn says he’s alright, but Butterbean moves in and nails him with a right cross @ 0:35. Well that’s one way to get a famous person on the show;however, it still sucked.  N/R

This was around the time where they couldn’t think of a name for Paul, but then they finally came up with Big Show, and it stuck with him. Show misses a swing. Mankind puts Mr. Socko in. Show starts fighting out of it, but Mankind keeps the hold in. Show finally picks him up and squashes him down to the canvas.  On the outside of the ring, Show hits Foley with a chair. Big Show then beats up Mankind in the ring, and eventually draws a DQ @ 6:50. Vince McMahon comes out pissed, and he starts yelling at Big Show for ruining the plain; then Vince pimp slaps Big Show, and then Big Show levels him. Vince wants to have Big Show the ref because he wants to give Austin a disadvantage, but Big Show screws the plain up. The match would have been better placed on Raw rather than the number one PPV of the year. Also, am I the only one who finds it funny that this beatdown put Mankind out of action, but his fiercer beat downs didn’t? ¼*

Ryan wounded up screwing Val, Billy Gunn, and Golddust to irate Shamrock, whore! Shamrock and Dogg start out the match. RD hits a dropkick and tags in Golddust. Golddust strikes away and throws Shamrock in Val’s corner. Val tags in and attacks Shamrock.Road Dog counters a Northern-Light and gets the Shake, Rattle, and Roll. Shamrock puts in the anklelock, but Val makes it to the ropes. They take it to the outside, and fight up the walkway where they both get counted out. Road Dog and Goldust are left. Shamrock obliterates them. Ryan by mistake grabs Golddust’s ankle, costing him. He gets a powerslam, but Road Dog rolls through it @ 9:47. No story, no structure and zero-percent of psychology; a bunch of spots thrown into one match with no flow. *

A San Diego Chicken comes out and goes after Kane. It turns out to be Pete Rose, but Kane gives him a TombStone, and it is enough distraction for Triple H to sneak behind and lowblow Kane. Kane tosses HHH away after some punches. Triple H sends him to the floor, but Kane lands on his feet, and pulls HHH out. Hunter irish-whips him into the steps.  Triple H gets him over and slams his face on the announce table. Kane nails H’s ribs into the ring-post. In the ring, Kane throws Hunter to the turnbuckle. Chyna then makes her way down to the ring. Hunter gets out of a Tombstone. Kane charges with the steel steps, but Hunter kicks them back in his face. Hunter trips him,and Kane goes face first into the steps. Triple H lariats him over the top. He goes for the Pedigree on the ring steps, but Kane backdrops him. Kane gets the chokeslam, and Chyna gets up on the apron with a chair. Kane turns him back and whack! SWERVE!  Kane wins by dq @ 11:30. HHH and Chyna start doing a beat down on Kane and DX lives on. Couldn’t Chyna have turned on Kane, and still gave us a real finish; seriously, who wants to see a DQ finish on Wrestlemania? Nothing reached 2nd gear in this match up; kind of felt like both wrestlers were on auto-pilot.  It is amazing how much HHH would improve over the course of this year. ¾*

Sable gets on the mic, and whoever thought it was a good idea for her to talk should have been fired. Tori wrestles her down and punches her in the face. Tori nails her with a sunset flip. Tori accidentally takes out the referee. Tori mingles out of the Sablebomb and goes for her own—but Nicole Bass press slams her. Sable finishes Tori with the Sablebomb at 5:06. This is not even the worse match of the night. -*

Shane avoids the Broncobuster and runs. Test illegal attacks X-Pac from behind and puts him groin first in the ring post. Shane gets pimp slaps X-Pac around. He misses the Corporate Elbow, but Test distracts the ref while Shane gives X-Pac a low blow. Shane takes Test’s belt and beats up X-Pac. Shane to the top, but X-Pac dropkicks him on the top rope. Test takes X-Pac to the outside, but the Pac dodges him. X-Pac kicks the poop out of Shane and nails the Broncobuster. Test gets in and levels him with the belt. Shane misses the Broncobuster. X-Pac nails a spinning wheel kick on Test; followed by the Broncobuster on Test. Triple H runs down and pulls Test out. Chyna distracts the ref long enough, but HHH turns on X-Pac. Shane covers and gets the win at 8:41. The Corporation beats down X-Pac, but Kane makes the save. Shocking swerve by HHH; at least at the time. It was surprising to see of all the matches in the mid-card; this was the best one out of all of them. It would have been better with less overbooking, less inconsistency of the rules and more time. But overall, it was still a solid match, which felt like a breath of fresh air compared to the other crap on this show. ** ½

Hell in the Cell: Undertaker (w/Paul Bearer) vs. Big Bossman.

They trade blows, and Taker gets a near-fall off a clothesline. Bossman comes back with a neckbreaker. Taker starts beating him down. Taker jolts him into the cell’s post. Bossman ties Taker up with chains and hits him with his nightstick. The cuffs snap and Taker falls down. Taker gets busted open. Taker hits him with a chairshot. Taker rams Bossman into the cell. Taker hits a flying clothesline for only 2.Taker goes up but can’t hit the Ropewalk forearm because the Cell in too small. Bossman takes the advantage and crotches him on the rope. Taker comes back with the Tombstone Piledriver for the three @ 9:46. Heel vs. Heel barely ever works because the fans don’t know who to cheer for or to boo, so it usually ends up being a dead and a not very interesting crowd. Not only did that take place, the match was awful also. Not the worse match I have ever seen, not even Taker’s worse match I have ever seen, but still pretty damn bad. -***

Jim Ross replaces Michael Cole and commissioner Shawn  Michaels removes Vince McMahon as ref. Austin and Rock brawl in the crowd, which. They fight to the staging area where Austin throws him into the railing. Austin tries a piledriver, but Rock backdrops him.Austin comes back and stomps a mudpile in the nuts. Austin strangles him with an extension cord and whips Rock into the entrance sign. Back near the announce tables, Rock gives him a water spot. Austin Snake Eyes him on the ring barrier, and follows by an elbow through the Spanish table. Back in, Rock hits a Rock Bottom. ONE-TWO-THR—NO! Rock gets a chair, but Austin takes it away from him. Austin hits the referee with the chair on accident. Austin blocks a chair shot, but can’t hit the Stunner. Rock beats on him with the chair. Tim White comes in. ONE-TWO-NO. Rock puts in a chinlock. Austin fights out of the chin lock but runs into a Samoan Drop for 2. Rock takes the ref out with a Rock Bottom. Rock turns around right into the Stunner! Rock does his overselling on the Stunner. Earl Hebner is the new ref. ONE, TWO, THRE-NO! Vince McMahon comes down and distracts Austin. McMahon nails Earl Hebner and joins the Rock in beating down Austin. Mankind comes out and throws Vince out of the ring. Austin gets two off a schoolboy, but hits a Thez Press. Rock regroups with the Rock Bottom. The Corporate Elbow misses, and Austin counters another Rock Bottom to the Stunner. ONE-TWO THREE! Austin wins @ 16:51. The typical Russo overbooking works here as this match is very fun. Not on par with their matches to come such as WM-17 and 19, but a great effort here. Some noticeable flaws in the match, and an obvious botch, but it didn’t make this less exciting. The match really didn’t have a dull moment, which it good, but I could have gone without the typical Attitude Era crowd brawling. The final sequence was really put together well, and created some good drama. One of the best matches of WWF in 1999, but that’s not really saying much. *** ½

Going Home: This is what happens when you allow Russo to book a Wrestlemania; it turns out to be one of the worse ones up to date. 2 out of 10 of the matches are above bad, and everything else basically is garbage. Wrestlemania should be about wrestling, mostly. Of course you can have your actors, famous people, and all the other entertainment stuff, but Wrestlemania is you’re “A” show, and you should build previous shows up for this one. In this case, Russo used this show to build up angles for the future, and for the show. Wrestlemania shouldn’t be based on storylines and angles; it should be focused on the wrestling. Raw is where you mostly focus on angles and storylines. It is pretty much 101 booking that you use TV shows to build up PPV. Russo still to this day does not understand that concept, and TNA’s buyrates are that low for that reason.