The Rock: The People’s Champ DVD 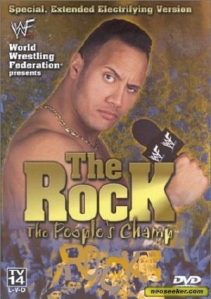 We start the DVD with various WWF talent talking up how nobody can touch the Rock when it comes to speaking on the mic. They run through the more memorable catchphrases that anyone can quote from that time period.

They start in June 1999 when the Rock was over his heel run and began to become the true People’s Champ. He challenges the Undertaker for the King of the Ring because he tried to crucify the Rock. He finishes up his challenge by telling the Undertaker that he should take his own thirty-three pound head and shove it up his own rear end. Undertaker comes out to accept the challenge, but Vince and Shane have a better idea. Rock has to beat the Undertaker in a non-title match first AND there will also be a special stipulation added onto the match, which the Rock won’t know about until five minutes before the match. Well, the special stipulation turns out to be none other than Triple H, which makes the match a triple-threat. Onto the match, Chyna grabs one leg too many from the floor and the final mistake she makes turns out to be the Undertaker’s leg. That causes UT to go out after her and the Rock to score the pinfall on HHH with the Rock Bottom to get his title shot at the King of the Ring.

D-Lo Brown talks about how awesome it was for somebody to finally talk down to the Undertaker after all those years of mentally dominating everyone.

Onto the Sunday Night Heat right before the King of the Ring, Rock talks some trash to the Undertaker, so the Undertaker sets Rock’s Brahma Bull hanging from the ceiling on fire. Not much to say about this match. However, Rock does take the BEST chokeslams ever with the way he kicks his feet way up in the air. He’s not afraid of taking those back bumps. Anyways, Rock tries to win by using Paul Bearer’s chloroform on the Undertaker. Just when he has the Dead Man pinned, HHH runs out and gives Rock a Pedigree. That allows UT enough time to wake up and deliver the TOMBSTONE to the Rock for the win.

Rock gets to throw out the first pitch at a Pittsburgh Pirates game. Why do they have to go to the crappy baseball teams to pitch? Austin goes to Kansas City, Rock goes to Pittsburgh.

We see some fans act like shameless idiots imitating the Rock.

Skip ahead a few weeks to Rock’s cage match with HHH on Raw in July. HHH wins, but the ref doesn’t see a thing and the match continues until the Rock comes away with the victory in a dramatic finish.

They show a video of Rock delivering the Rock Bottom to everyone on the WWF roster except for Stone Cold. That’s actually pretty sweet.

Various sports stars have showed up in WWF audiences and the Rock spits out his catchphrases at them.

So now we go to Fully Loaded where the Rock meets Triple H in a strap match because Vince McMahon has named HHH the #1 contender to the WWF title right after Rock beat him in a cage match. Billy Gunn interferes a lot on Hunter’s behalf. That allows him to eventually get the win with the PEDIGREE. That means Triple H gets a title shot at SummerSlam and Rock does not.

We check out the Rock’s barber shop in Miami. He gets his electrifying edge done there twice a week – some times three. Where does he buy all his $800 shirts? Try the store Lucky’s in a mall in Miami.

Continuing onto Rock’s feud with Billy Gunn. They have a “Kiss My Butt” match at SummerSlam. It pretty much turns into “Kiss This Random Fat Lady’s Tushie” match.

After Hunter secures the WWF title at SummerSlam, Rock gets a title shot on Smackdown with Shawn Michaels as the special referee. Right when Rock has the match won, HBK cuts off the People’s Elbow with SWEET CHIN MUSIC. I don’t think they ever followed anything up with that.

They show the Rock getting the crowd pumped at his alma mater Miami/West Virginia football game.

Now onto the Rock N Sock Connection. The people wanted it and they got it. On their first night together, Rock N Sock defeated Big Show and Undertaker for the WWF tag team belts. Of course, they would lose the belts shortly to the New Age Outlaws. That sets up the “This Is Your Life” segment that was not only the longest segment ever on Raw, but also the highest-rated segment (an 8.4!) ever on Raw.

Skip ahead to November, Rock feels he has no one to trust in the WWF – not even Mankind. When he ends up in a handicap match against Prince Albert and the Big Bossman, Mankind comes to his aid and helps Rock defeat Albert with the People’s Elbow while Mankind has Bossman choking on Mr. Socko.

During this phase, Rock starts talking about his favorite kind of pie and generally making fun of everyone. What do you think of this recap so far? IT DOESN’T MATTER WHAT YOU THINK ABOUT THIS RECAP!

On the night after Survivor Series when the law comes looking for who run down Stone Cold Steve Austin with Rock’s car, of course the Rock is one of the people they question. Well basically makes them look like idiots and wipes the floor with them with all his insults. They like doughnuts. Enough to stick them up their butts though? I don’t know about that, Rock. This is apparently one of Michael Cole’s favorite Rock interviews because he couldn’t stop laughing through the whole segment.

Al Snow tries to split up the Rock N Sock Connection. I love how Rock calls him “some guy named Al.” This leads to a Rock-Snow cage match on Smackdown. It’s actually a pretty great looking match according to the montage. A chair gets in the ring and Snow takes an awesome bump as he tries to run and splash Rock off the chair in the corner, but Rock jumps up and clotheslines Snow down across the chair. Snow receives the People’s Elbow on the chair to give Rock the win.

Now Rock has a BOOK being released. Several thousand fans come to the book signing at Tower Records in New York City. It’s a great time had by all.

We come to the end of the program, but the Rock says he will continue to electrify his millions (AND MILLIONS) of Rock’s fans all over the world. If YA SMELL WHAT THE ROCK…IS COOKIN.

The Rock Says…: On this page, there’s about nine different CLASSIC and hilarious in-ring promos by the Rock. I don’t see a need to list them off because most of them were shown in the program.

The Interviews: Here you’ll get eight fantastic backstage interviews where he generally just makes fun of people, which is always entertaining. If you want to know which ones are here, just read my recap of the program.

Final Thoughts: This is a great look at the rise of popularity of the Rock in 1999. Watching both the Stone Cold Steve Austin Hell Yeah and the Rock People’s Champ DVD sets together are interesting because you can’t really tell which one was MORE popular at the time. It’s a great look into the personality of the character of the Rock and while there is no full matches, there’s a lot of great looking montages that make the overbooked Attitude era match look extremely exciting. Thumbs up for the People’s Champ DVD.