SPECIAL NOTE: Because of the NBA playoffs airing on TNT, the next four weeks of Nitros will only be one hour.

Ric Flair can handle big men! He pinned that one big guy who now works for the WWF named Vader back in 1993! I seem to remember that another big man came along and beat him for the WCW world title a year earlier. Who was that guy again?

HOUR NUMBER ONE! Your hosts are Tony Schiavone, Bobby Heenan and Larry Zbyszko.

We hear bagpipes. Roddy Piper and Ric Flair stop by the announcers position. Piper says the new World order are just too lazy to fill in a couple of potholes. He also wants to do it RIGHT HERE TONIGHT instead of waiting for Charlotte. Give them their best shot, or don’t bother shooting at all. Flair is ready to go! WOO!

Before the match, Jeff Jarrett appears on the split-screen sending out a challenge to Malenko for a US title match at Slamboree. Why not, you just beat Scotty Riggs last week. Give the man a US title shot. Wristlocks and chinlocks to start. Iaukea gets a nearfall off a superkick. Enough of that. Malenko delivers a powerbomb, which sets up a sequence of rollups. Powerslam leads to the TEXAS CLOVERLEAF for the tap out. (3:03) So it appears Iaukea is back on squash duty, just as God intended. ¾*

We’ve seen more out of Syxx in the past three weeks than we had in the first three months he was in WCW. Juvi sends Syxx to the floor with a headscissors. Back in, Guerrera gets launched out of the corner and does a backflip only to stand up into a spin kick from Syxx. It looked like it took his head off. Syxx delivers the Kick Combo in the corner and follows with the Bronco Buster. Syxx takes over, but gets crotched up top for a spinning hurracanrana! Cover, 1-2-NO! Juvi connects with a springboard somersault dropkick for 1-2-NO! Quebrada misses and Syxx grabs the BUZZ KILLER and puts him away before anything more can happen. (4:35) This was the closest thing to a competitive match tonight. **

Time for “On the Road with Lee Marshall”. He’s in Lakeland FL this week and makes a lame weasel joke. I know! Can you imagine he would do such a thing?

Just as that segment closes out, the nWo head out. Actually, it’s just Kevin Nash, Scott Hall, and Syxx. They take over the announce position to answer the challenge. Hall says whatever to what Piper and Flair had to say. He also does a little precursor to the survey without actually asking the crowd whether or not they came to see the nWo by simply saying that they came to see the nWo. Nash says they’ll give them a fight tonight, but they want 75% of tonight’s gate. It don’t come cheap when you have the best! They send a shoutout to Hollywood Hogan before they head out.

I can’t see Benoit going over here since Regal has an upcoming TV title match, so it’s safe to say a DQ ending is in their future. Heck, it’s WCW. There’s a DQ coming soon after two clean finishes. Regal and Benoit do their classic mat exchanges until Kevin Sullivan and Jacqueline head out for the DQ. (2:32) What did I tell ya. Benoit chops Sullivan into the aisle. Jackie jumps on his back, but Woman tries to stop her. As Benoit turns around, Meng is there with the TONGAN DEATH GRIP. Regal actually tries to help, but Meng gives him a quick KICK OF FEAR with the hold still applied. What a multi-tasker! Once Meng locks eyes with Woman, he decides to let Benoit go. After months of this Benoit-Sullivan feud going nowhere, they are building up Meng quite well. ½*

Boy, Lex and the Giant have been pushed aside ever since Roddy Piper and Ric Flair returned. Don’t you think? The AFC press Luger onto the top rope to send him out to the floor. That was AWESOME. Oulette backs Lex into the railing and tosses him back inside to become *your* face in peril. Backbreaker followed by a flying knee drop from Rougeau, but then they waste time and Oulette misses a flying elbow. HOT TAG TO GIANT! He tosses away some double-team CLUBBERIN and puts Rougeau down with the CHOKESLAM while Lex grabs Oulette for the TORTURE RACK. (3:02) Didn’t stand a chance against these two. It’s funny how different things are done in Canada. At a Montreal house show on April 11, Jacques Rougeau pinned Hollywood Hogan in a non-title match. Also on the card, Carl Oulette scored a DQ win over the Giant. ¾*

They bring out some year old Mike Ditka comments about Steve McMichael and use them to put over Mongo for the upcoming Reggie White encounter. It’s now become a Bears v. Packers thing. For some reason, I didn’t really get that at first. I guess it’s just not like Mongo is a part of the 1997 Chicago Bears that White would be facing in the fall. Even if you don’t care for the match, at least Rodman v. Malone made some sort of sense.

McMichael fights off Barbarian’s initial attack, but then turns away only to eat a KICK OF FEAR! To the floor, Barbarian whips him into the guardrail and then slams him on the ringpost. Back in, he gives Mongo a piledriver for 1-2-NO! Barbarian beats Mongo down into the corner and knocks the ref back because he’s a SAVAGE BEAST! That allows Debra to hand off another Haliburton to Mongo (because Reggie White STOLE the other one last week). He blasts Barbarian in the head and covers for the 1-2-3. (3:05) Same old stuff. ¾*

Roddy Piper and Ric Flair come out for their fight. Come on out, nWo. Flair says he KNOWS he can whip Syxx’s behind. He’s been world champ more times than Syxx has had women. WOO! Well, that’s the censored version. The nWo music hits and before they head out, papers fly down from the ceiling that reads “Tradition bites! nWo 4 Life”. This seems to anger Piper more than it does Flair. Once Kevin Nash, Scott Hall, and Syxx walk down the aisle, Flair is there to meet them with shots to the balls. Screw the signs, he just wants to fight. He slaps the FIGURE-FOUR on Syxx, but that’s stupid. Hall and Nash pull him off Syxx for a beating until Roddy Piper FINALLY comes over to help. I mean, what was he doing?! Just standing in the ring watching? That goes on until we run out of time. 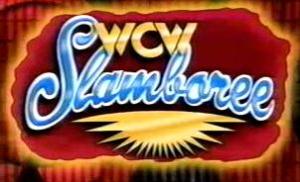 WCW presents Slamboree on May 18 in Charlotte NC!
Here is the announced card as of April 28 1997: