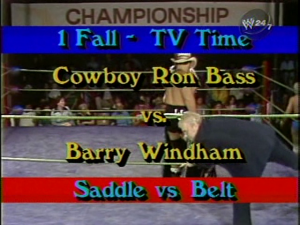 So Ron Bass turned on his “childhood friend” Dusty Rhodes due to competitive jealousy and being that Windham is considered part of Dusty’s family, he’s out to get the saddle back that “Dusty’s mom had given” to Ron Bass against the wishes of Dusty and his own father. Now *that’s* SOUTHERN ‘rasslin if I ever heard it. This is best known as the Saga of the Family. Against Dusty’s warning, JJ Dillon (the manager of Ron Bass and the Bobby Heenan over his heel turn) shows up on Dusty and Blackjack’s ranch trying to talk to them. Unfortunately for Dillon, Blackjack Mulligan has a rifle. A couple warning shots comically scares Dillon back through some woods instead of back to his Lincoln Continental. The forearm of the ranch goes as far as to use tracking dogs to find Dillon. Pretty hilarious even for wrestling. JJ Dillon says he ran through the wilderness for six hours chased by all kinds of animals – including getting a snake bite! It was SOLD OUT and hanging from the rafters! We learn the justification for JJ Dillon’s reasoning for wanting rid of Blackjack Mulligan and Dusty Rhodes: Texas-style matches and wrestlers from Texas in general are just too dangerous! They are even using Rhodes and Mulligan’s real names on camera here to make it seem even more personal. Now the final chapter of the Saga of the Family. I guess the Family Saga is just too on the nose.

Windham controls to start by staying one step ahead of Bass. When he slaps on a chinlock, Bass slides on the mat into the ropes and gets some insight from Dillon as we go to commercial. AND WE’RE BACK! Windham maintains a headlock. Bass shoves him off into the corner, but he catches himself and launches from the second rope into Bass with a forearm shot for two. With Bass getting owned, we go to another commercial break. When we return, Bass is out of the headlock. He shoulderblocks Windham, but gets taken over with a monkey flip. More headlockage. Solie and Colt still want to know what the deal is with this saddle. Bass catches Windham with a knee as he comes off the ropes and then suplexes Windham out of the corner. That gets two. Backbreaker and an atomic drop leads to an ab stretch. More commercials. Windham escapes a front headlock, but gets thrown to the floor where Bass bounces his face off the ringpost to bust him open. Back inside, Bass works the cut a bit. He misses a Harley Race diving headbutt and takes a dropkick to the floor. Barry follows him out and throws him into some wooden paneling to bust open Bass. It’s a pier-sixer, guys. Windham punches Bass back inside and down onto the mat for two. A headbutt by Bass sends both he and Windham reeling. Back suplex by Bass gets two. Now there’s a double-KO. Commercials! When we come back, Solie mentions how both men are wearing crimson masks. Windham wins a slugfest on their knees and hits a suplex, but misses an elbow drop. Windham fires back and reverses a cross corner whip before nailing Bass with a LARIAT for 1-2-3. (18:10 shown) The TV crowd goes insane and really showing their support for Windham. Just as Windham touches the saddle, Bass nails him from behind and gives Windham a big rib buster. In comes the One Man Gang as Bass tosses away ref Bill Alfonso. Windham pulls himself up using Bass, OMG, and JJ Dillon’s bodies and they just individually shove him back down onto the mat. With Windham down on his belly, Bass lays the saddle on top of Windham, sits down on the saddle, and then pulls back on Windham’s hair. Ron Bass heads over to Solie and Colt to tell them that the Yellow Dog can come look for him anytime he wants the saddle. This is just epic CWF TV. ***¾

Gordon Solie reminds us that if you’re wondering why nobody came to help Barry Windham, having no allies in the building was the only way Ron Bass would agree to the match.

Since the full hour was devoted to the Windham v. Bass match, this is really just a standby affair. While Denny Brown and Mike Fever get destroyed, Holiday tempts Hector with the dolla dolla bill, ya’ll. He takes the money and runs. Fever takes the 747 SPLASH to give OMG the win as if there was any doubt at 3:12.