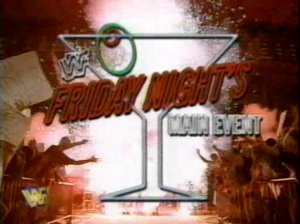 Your hosts are Jim Ross and Dok Hendrix.

If that is not a 17 year-old Miz having a “verbal altercation” with Owen during his entrance, then I have completely lost it. Seeing how new he is to the WWF and that he has a WWF title match in two days, JR and Hendrix both do what they can to put Patriot over here on commentary – mentioning his speed and power advantage. Owen interrupts Patriot’s work on the arm and starts hitting him with backbreakers and suplexes. Commercials! When we come back, Owen delivers a missile dropkick for two. Sharpshooter gets blocked, and Patriot begins his comeback. Owen stops Patriot with the enziguri kick, but gets slammed off the top. Here comes Davey Boy Smith to attack Patriot for the DQ. (6:33 shown) Bret Hart joins his family members to beat up Patriot until Vader makes the save. To set the stage for Sunday, Vader whips Bret into the UNCLE SLAM. Some refs head down and finally separate the two sides as the Hart Foundation retreats. **

Commissioner Slaughter denies Stone Cold Steve Austin’s request to return to competition and orders him to vacate his half of the WWF tag team titles at Ground Zero.

Some camera crew dorks head over to Steve Austin’s ranch in Texas to find out what he thinks about being suspended from the WWF. At first, Austin wants them to get off his property. On second thought, he uses this opportunity to vent a little bit, because naturally Stone Cold is PISSED OFF. Austin gets a care package from the WWF (via FedEx, obvs) and it’s a bunch of publicity photos from Jim Ross, Vince McMahon, Gorilla Monsoon, and Owen Hart wishing him well. They all have the same signature, which pisses off Austin. He then berates and threatens the camera crew jagoffs and uses the publicity photos for bow and arrow practice. JR gets an arrow shot at his dick for the lulz. Austin promises to be at Ground Zero and tells the WWF that they can’t take the Intercontinental title away from him. And that’s the bottom line. Very old school piece in design, but certainly not in tone.

Bulldog attacks Dude during his pre-match ringside interview with Ross. After a break, Dude cuts off Davey Boy with a sleeper. In order to break the hold, Bulldog flips him out to the floor and then kicks him through the ropes to allow Dude to take a nasty bump into the guardrail. Davey Boy just makes it worse for Dude with some more ringside violence. Back inside, Dude Love fights out of a chinlock and makes his big comeback. Sweet Shin Music sets up the DOUBLE-ARM DDT, but Owen Hart appears and sets up the DQ loss for Bulldog. (5:37 shown) Owen gets on the mic and calls out to Austin telling him that he’s going to do to Dude what he did to Austin, which is BREAK HIS NECK. It never happens though because the Legion of Doom make the save. Once they have cleaned house, Dude invites LOD to dance with them. Yeah, they don’t do that. *

They re-air the Goldust/Pillman feud video package to set up the next interview.

Sunny gets an interview with Brian Pillman backstage. This is the filthiest promo ever that has ever aired on WWF TV to this point. I don’t say that from a place of an FCC-like outrage; it’s just a fact. Lots of sexual innuendo and double entendres happening here where it’s very specific yet tame as to what he wants to do with Marlena if he beats Goldust at the Ground Zero PPV and gets her for 30 days. Pillman finishes up saying that he’s not going to ask Marlena to do anything she hasn’t already done. Before you ask me, yes I did catch him saying that he’s not a “taskmaster”.

Jim Ross invites the WWF champion Bret Hart to the ring. He chastises America for treating their heroes like crap. He calls Patriot’s win over him “cheap”. When he gets to Ground Zero, he will see America itself across the ring from him. Bret says he’s going to beat up Patriot so bad, he’s going to be the only person in heaven wheeling around in a wheelchair. Whether we like it or not, Patriot’s career in the WWF will end at Ground Zero. I believe that says it all. Good interview from Bret.

Back to the locker room, Rick Rude flirts with Sunny. She wants to know who he’s working for, but Rude says he works for anybody who needs protection and can pay the “insurance” premium. Will he be at Ground Zero? Professionally, you’ll have to wait and see. Personally, he tells her what hotel room he’s staying at. Well, then. That’s pretty forward, if you ask me.

UT takes out his aggressions on Helmsley to start. Rick Rude appears and provides the necessary distraction so that Helmsley can capitalize. It really doesn’t matter that much because Taker is so PISSED. He hits Old School and looks to put Helmsley down, but then both Chyna and Rick Rude hop up on the apron. Shawn Michaels sprints down to the ring wearing his black mesh t-shirt (VINTAGE HBK~!) armed with the very same steel chair he used on Taker on the last Raw of August for the DQ. (4:36) If anybody tries to make the save, Chyna is there to keep them away. Even though they have the chair, Taker fights off Rude and HHH and scares Michaels away. Since he couldn’t get his hands on what becomes known as DX, Taker starts dishing out chokeslams to anybody who gets near him – including Gerald Brisco and various “security people”. *½

Backstage, Sunny catches up with Shawn Michaels while he is fleeing the building. Shawn says he drew first blood and will draw last blood as well. If it bleeds, Shawn informs us that it can be destroyed.

Jesus Castillo and Jose Estrada Jr. are here to take on LOD. The match plays second fiddle here as the Godwinns and Disciples of Apocalypse head down for one gigantic brawl as the match is thrown out. (2:31) GANG WARZ. ½*

Video package highlighting the Patriot’s football achievements and wrestling achievements in All-Japan. They show footage of Patriot wrestling in the 1996 Real World Tag League when he teamed with Kenta Kobashi. Some of those matches are just a YouTube search away if you are interested.

Shamrock goes for quick submission holds early here. Nothing that gets Sincere in trouble though. Out on the floor, Sincere reverses a whip into the ringpost. He follows up with a baseball slide and brings Shamrock back inside for a Northern Lights suplex. Shamrock fights back with a powerslam and a headscissors takedown. ANKLELOCK gets the tapout. (5:19) Glorified squash to get over Shamrock despite not being on the Ground Zero card. *

Poor Putski. If the WWF’s light heavyweight division is supposed to be the counter to WCW’s cruiserweight division, how can it possibly get over when the WWF guys wrestle like heavyweights and the WCW guys wrestle a much more spectacular style that sets them apart? Swing and a miss for the WWF all the way around. When Casey tries to switch it up and start doing bigger spots, Putski cuts him off and reverts back to the same heavyweight style. POLISH HAMMER is enough to end Casey. (3:50) Time is ticking on Putski’s run here, folks – and probably not for the reason that seems so obvious. ¾*

Sunny speaks with Paul Bearer wanting to know what his relationship with Vader is now. He wants Vader to realize that his allegiance belongs to him, not to some dumb country. Bearer switches gears and reminds us of Kane. When Kane comes, the fat man will sing, and that fat man is Paul Bearer!

They always save this wrestling abortion for last so that your mind can ignore the match and pay attention to the final PPV hyping from JR and Hendrix. Interrogator is Kurrgan, by the way. He throws these two jabronis around and stacks them up for the pinfall at 2:21.

Ross and Hendrix remind us once more about the Ground Zero PPV to take us out.

Just a Chicago house show disguised as a television program.