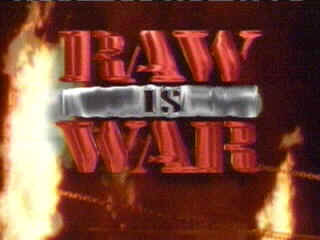 TIME TO GET RAW! Your hosts are Jim Ross and Jerry Lawler. Vince is afraid of what happen if Stone Cold Steve Austin is around.

Faarooq drills Shamrock before the bell starts. Shamrock fires back with kicks and a knee lift. Nice belly to belly suplex on Faarooq, but he catches Shamrock with a Spinebuster to turn the tide. Looks like Shamrock suffers some internal injuries as he’s bleeding from the mouth. Nevertheless, Shamrock recovers and lands another Belly to Belly Suplex. He falls on top of Faarooq and gets the three-count to advance. (2:43) After the bell, Faarooq makes Shamrock pay with a DOMINATOR before the rest of the Nation of Domination head down to beat him up. The Legion of Doom save the day for Shamrock so that Ross can hype their six-man match already scheduled for Badd Blood: In Your House. This actually is the match that put Shamrock out of action for the next month due to a lung injury. Looking at the brackets, it’s not hard to presume that Shamrock was scheduled to face Owen in the finals. ¾*

Backstage, Steve Austin is just hanging out leaning against a forklift. Lawler tells Austin that Owen Hart has a big surprise for him tonight. Austin could not give less of a crap.

JR puts over El Pantera as a former CMLL welterweight champion. TAKA’s biggest accomplishment is being a “highly sought after free agent”. You have to hand it to Ross. In WCW, they have to bring in a Mike Tenay to call these type of matches. He does a darn good job here. He never comes across as an oblivious commentator just because these two are not Americans like in WCW. He calls the moves correctly, and treats these matches with the utmost respect, as though it were something you didn’t want to miss. Pantera sends TAKA to the floor after a pair of headscissors takedowns. He does a fake dive and bounces back off the ropes before exploding with a somersault plancha. Back inside, TAKA catches Pantera jawing with the fans and hits a spinning heel kick to take him to the floor. Now TAKA shows off his signature springboard dive. Back inside, Pantera takes control with a tilt-a-whirl backbreaker. After a whip into the corner, he does the handstand on the top turnbuckle identical to Ultimo Dragon and then headscissors Michinoku to the floor. With that accomplished, Pantera delivers a tope suicida. Back in the ring, TAKA gets caught going up top and brought down with another headscissors. Moonsault press by Pantera gets two. Hurracanrana gets another nearfall. La Magistral NEARLY gets the three-count for Pantera. Michinoku stuns Pantera with a Tornado DDT. Missile dropkick and the MICHINOKU DRIVER is enough to put Pantera down for the count. (4:00) REALLY fun four-minute match. As good as anything you would see on Nitro at the time. ***¼

The Truth Commission backstage says they will prove how superior they are over everybody in the WWF. Second place does not count, AND THAT IS THE TRUTH. He’s got his catchphrase, ladies and gents.

Crowd is super behind LOD. Naturally, Animal is *your* face in peril after he’s sent into the steps. It doesn’t take long though before he explodes on Recon with a clothesline out of the corner and hot tags Hawk. It’s DOOMSDAY DEVICE time for Recon, but in comes the Interrogator to break up the pinfall for the DQ. (3:44) Animal runs at the Interrogator with a clothesline, but he NO-SELLS and boots down Animal. Ken Shamrock tries to return the favor and help out LOD, but Interrogator thinks MMA is bull and headbutts Shamrock away. Not having forgotten what happened earlier, the Nation of Domination appear to help beat down LOD and Shamrock. There’s no comeback and nobody to help them. They are just left for dead in the middle of the ring. Ross has already started to lose his voice. ¾*

Just for an excuse to get Sunny on TV, she introduces the next match. Unlike with present-day WWE commentators, Ross gives credibility to what is happening in the ring even when it’s little people competing. Unfortunately, the crowd doesn’t seem to care, at least not at first. If you’re comparing this to WCW cruiserweights, this is like Rey Mysterio and Juventud Guerrera against Psychosis and La Parka. The rudos double-team the tecnicos quite a bit. Pretty sweet ending as Lucky takes out Morgan with a springboard dive out on the floor. In the ring, El Torito misses a flying senton and then receives a flying headbutt by Max Mini for the 1-2-3. (6:55) This was fantastic. Just loads of fast, fun lucha action. Afterwards, Sunny dances with Uncle Jerry at ringside. ***

Dude Love is kind of in limbo right now. He’s not really feuding with anybody. Why he didn’t win the previous match by forfeit since Pillman didn’t show up is beyond me. Instead of a gold dress she normally wears, Marlena is dressed in all black including her stockings and shoes. Her hair is weird looking, she has a sad look on her face, and a nose ring. Lawler thinks Pillman even had her put a tattoo on her…arm. By the way, Goldust has been barred from the building tonight. Wink wink. JR interviews Marlena. All she wants is to go home and be with her husband and her daughter. Pillman shoves JR away and makes her hold the ropes open for him. Ross thinks she’s in some kind of a trance. Lawler is giddy about her possibly not wearing any underwear. This is just really bizarre. The crowd gives Pillman a hard time; and justifiably so. There’s a feeling out process to start. Marlena tries to leave, but Pillman brings her back to ringside. Dude takes a spill over the top rope and gets sent into the steps. Back inside, Pillman wears him down with a chinlock. Dude Love fights out and makes his comeback. As he’s setting up for Sweet Shin Music, Goldust in his Dustin Rhodes gimmick has jumped the rail and attacks Pillman for the DQ. (4:47) Marlena smiles at what she sees, but WWF agents and referees get ahold of Rhodes, and Pillman escapes taking Marlena with him. WHAT A CHAOTIC SITUATION~! *

AND NOW WE ENTER THE WARZONE! Your hosts are Jim Ross & Jerry Lawler.

Has Jerry Lawler got the guts to interview Stone Cold Steve Austin? You bet he does. Lawler recaps the recent Stone Cold Stunners delivered to Ross and Commissioner Slaughter, and how Vince McMahon didn’t want to appear tonight because of the tension he felt between he and Austin last week on Raw. Austin says he does whatever he wants and can’t nobody stop him. If Vince was here tonight, he would drop a Stunner on him. The Hart Foundation interrupt. Bret says his crew have had enough and have decided to take legal actions against Steve Austin. Some ambulance chaser steps out from behind the Hart Foundation and walks down to the ring to present Austin with a temporary restraining order. In other words, Austin can’t come within 100 feet of Owen Hart or he’ll be arrested. Hmm, where have we seen this recently? Once the Hart Foundation leaves, Lawler starts to read the restraining order over Austin’s shoulder and yapping his gums. When Austin has enough of Lawler, he gives him a Stone Cold Stunner and then kicks Lawler’s crown up the aisle.

The always entertaining Jim Cornette replaces Jerry Lawler for the rest of the show. Lawler is backstage getting his neck all realigned. The respective flags are set in the corner to show you what the flag match will look like at Badd Blood: In Your House. They work off a Patriot armbar for the first few minutes. Owen hits a missile dropkick as we see that Steve Austin is standing on the stage with Muncie’s Finest standing behind him. Commercials! When we return, Austin has left, but the policemen are still standing there. Patriot mounts his power comeback. Patriot Missile connects, but only gets two. Staying away from the police, Austin has jumped the rail and tears up the restraining order right in Owen’s face. It doesn’t nullify it, you know! Being ever so scared, Patriot rolls up Owen for the three-count and another cheap win against the Hart Foundation. (7:38 shown) Owen carries Patriot to a decent little match here. Patriot gets some a little bit of his heat back after his Ground Zero loss. Austin laughs it up while the police slowly chase him through the arena. They are *not* in any kind of a hurry to arrest Austin. **½

Jim Ross brings out Shawn Michaels who is wearing little but shades, bicycle shorts, and combat boots. Ross wants Shawn to explain his reason for what he and Hunter Hearst Helmsley did to Davey Boy Smith this past week on Raw. Shawn did what he had to do to go after the European title so that he could be the ONLY MAN to hold EVERY championship in the WWF. As for the Hell in a Cell match, he despises the powers that be after all he has done for the WWF for getting stuck in a cell with death itself. Will this be the demise of HBK? If he goes down, he’s taking everybody with him in a BLAZE OF GLORY. Undertaker interrupts via TitanTron standing in front of cyclone fencing. Shawn is going to pay dearly. So many cage match clichés in these promos. HBK gets the last word telling Taker that he better get used to the taste of his own blood, because he’s going to taste a lot more of it come October 5.

Bret and Davey Boy both looking for another championship. Cornette emphasizes how these two have never held the WWF tag championship together. This past Saturday at Veterans Stadium in Philadelphia, we see that the Headbangers showed up and slammed the Phillie Phanatic. Maybe now the Green Man can take over mascot duties. That Phillie Phanatic has had a stranglehold on the Philly mascot scene for way too long. The Headbangers control early with armbars and chinlocks. They even cheat a little bit as Bret gets strangled by Mosh in the corner when he’s not the legal man. Davey Boy even tries the Hourglass Suplex, but Thrasher counters with an inside cradle for two. Bulldog finally takes advantage with a Spinebuster to lead into the Hourglass Suplex on Mosh. Tag to Bret, he hits the Russian legsweep and a pair of elbow drops. Bret puts Mosh in his corner for the tree of woe as we step out for a commercial break. AND WE’RE BACK. Mosh is still in trouble. Bret delivers the backbreaker, but Mosh rolls away from the flying elbow. Huh. Hot tag to Thrasher, and the match gets crazy. Out of nowhere, Bulldog gives Mosh the RUNNING POWERSLAM and covers him for the 1-2-3? But Mosh was not the legal man, so the match continues. Well, Bulldog has had enough and steals a fan’s American flag so he can break the pole over Thrasher for the DQ. (10:34 shown) Bret and Bulldog do a number on the tag champs until Vader and Patriot make the save. They escape by the skin of their teeth just as Vader threatens a VADER BOMB. We’re outta time though, folks! **

Is it strange that they never showed Steve Austin getting arrested for breaking the restraining order?

The WWF presents Badd Blood: In Your House (brought to you by Sony PlayStation) LIVE on October 5 from St. Louis! Here is the card as it currently appears: