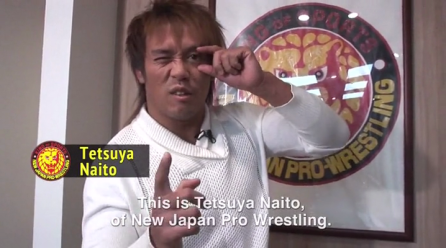 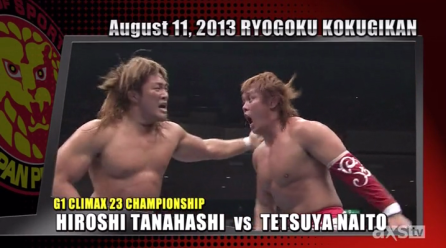 During the nine-day tournament, Hiroshi Tanahashi led Block A with 11 points and pinfall victories over Davey Boy Smith Jr., Togi Makabe, Hirooki Goto, Lance Archer, and Katsuyori Shibata. He lost to Satoshi Kojima, Tomohiro Ishii, and Prince Devitt – and wrestled a thirty-minute time limit draw with archrival Kazuchika Okada. On the other hand, Tetsuya Naito led Block B with 10 points and pinfall victories over Yuji Nagata, Minoru Suzuki, Shelton Benjamin, Shinsuke Nakamura, and Karl Anderson. He lost to Yujiro Takahashi, Kota Ibushi, Hiroyoshi Tenzan, and Toru Yano. The story going into this match is that Tetsuya Naito is suffering with a right knee injury – and despite having it still wrapped up – looks to secure the G1 Climax and face whoever the IWGP heavyweight champion is on the grandest stage of them all: WRESTLEMANI-no wait, it’s called WRESTLE KINGDOM in the TOKYO DOME on January 4.

Reality has set in on these two guys as they work at a slower pace than you normally would see. Headlocks and headscissors to start. When Tanahashi starts going to the air with a crossbody out of the corner, Naito thinks he should do the same and gets outsmarted by Tanahashi with a chopblock to the bad knee. WOO! They even do the Arn Anderson bit where his knee gives out and Naito faceplants. Tanahashi slaps on the reverse Figure-Four and stays on the knee when Naito reaches the ropes. Naito avoids a splash in the corner and takes Tanahashi down with a tornado DDT. Now Naito goes on the offense working on the neck. We’ve got neckbreakers and kicks directed at the neck. Just all kinds of abuse. Naito full nelsons Tanahashi using his legs down on the mat. Whatever he can do to put pressure in that area. Tanahashi finally catches a kick and dropkicks the knee. Naito rolls out, which means it’s time for the FLYING BODY PRESS ON THE FLOOR. You would think wrestlers would see that coming by now. Back on the apron, Tanahashi leg whips the bad knee through the ropes. In the ring, Naito avoids a Texas Cloverleaf and kicks Tanahashi in the back of the head. They start throwing elbows for a solid thirty seconds. Not sure what happens, but they miss each other running off the ropes. SUCH EXHAUSTION. Naito wins the slugfest, but Tanahashi delivers the bridging German suplex for two. Sling Blade connects! HIGH FLY FLOW misses! Naito catches Tanahashi with a missile dropkick to the back of the head (doing more damage on the neck) and follows up with a bridging German suplex of his own for two. Dragon Suplex is blocked, but Naito nails the enziguri. He continues with the Flying Forearm. He hits Gloria and tries the STARDUST PRESS, but Tanahashi rolls out of the way, thus jarring the knee. The Texas Cloverleaf won’t submit Naito, so Tanahashi returns to the Dragon Screw Leg Whips. He calls for another Sling Blade, but Naito catches him in the PLUMA BLANCA. You know it better as the Koji Clutch. Tanahashi nearly goes out before reaching the ropes. Naito wants a super hurracanrana, but Tanahashi rolls through and delivers the STYLES CLASH of all moves! Just in case you’re wondering, AJ Styles was still signed with TNA at this point, so it’s not like Tanahashi is trying to send a message to him or anything. HIGH FLY FLOW TO THE BACK! HIGH FLY FLOW AGAIN, but Naito brings up the knees! Ouch that has to hurt. Tanahashi stops a charge with a dropkick to the knee and calls for another Sling Blade, but Naito is one step ahead and drops Tanahashi with a Sling Blade of his own. Dragon Suplex to Tanahashi! That only gets two. Gloria sets up the STARDUST PRESS! This time Naito delivers! Cover, 1-2-3! (26:44) Great overcoming the odds story here for Naito. It certainly isn’t perfect though with some silly psychology problems like Naito using his injured knee to block a 200 pound man from falling on him. Maybe this wasn’t the best example of a Naito match (although it should have been), but I wonder if Naito is really on the level of stars like Tanahashi and Okada. Should there be an upset win in the tournament of tournaments: the G1 Climax? It’s certainly a question up for debate, right? ****

NEXT WEEK: We will go to the 2013 King of Pro Wrestling PPV! NO LIMIT EXPLODES over the NEVER Openweight title! Plus, Shinsuke Nakamura battles Naomichi Marufuji to decide the IWGP Intercontinental champion!