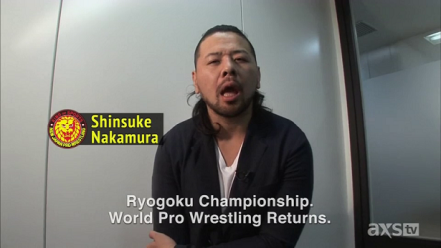 This week, we take a look at the King of Pro Wrestling 2013 show. I suppose another Tanahashi/Okada match on this show might be a little overkill, so they skip that and give us the two semi-main events. 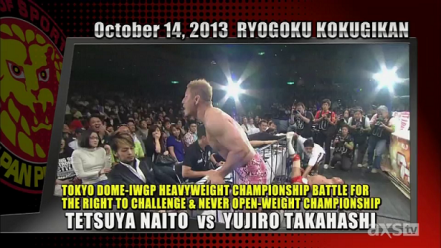 Naito’s IWGP heavyweight title shot set for January 4 in the Tokyo Dome is also on the line here. Oh yeah, and NO LIMIT EXPLODES – AGAIN. They have wrestled off and on since the breakup in 2011. Takahashi takes the blame kayfabe-wise for Naito’s knee injury that he just returned from back in the summer. Takahashi brings with him a couple of ladies of the night to the ring. They each wear a one-piece that would even be risqué for the Attitude Era. Like a true gentleman, he makes them get into the ring by themselves while he sits from the front row and watches them strut around. If Antonio Inoki finds out about this, he might say, “I don’t know WHAT’S going on over there.” Anyways, Takahashi gets in the ring and enjoys a kiss on both cheeks. As Ranallo points out, that entrance was rather elaborate.

Takahashi BUM RUSHES THE SHOW and dropkicks Naito in the knee before the bell, obviously showing us what his gameplan will be. He tries PILLMANIZING the leg, but the ref Red Shoes does his job and keeps that from happening. Naito makes Takahashi pay by dropkicking the chair in his face. He sells the knee a little bit, but then delivers that legsweep and slingshot corner dropkick on Takahashi. Series of neckbreakers leads a full nelson using the legs. Takahashi makes the ropes and sends Naito to the floor for a tope suicida. We JIP ahead to Takahashi delivering a Belly-to-Belly Superplex followed by the Incolle Slam for two. Naito fires back with the PLUMA BLANCA, but Takahashi makes the ropes. Super headscissors from Naito leads to the missile dropkick to the back. Bridging German suplex gets two. Takahashi stops a victory roll with an awesome bridging German suplex of his own for two. Buckle bomb by Takahashi sets up the DEAD LIFT GERMAN SUPLEX for 1-2-NO! Naito ends a slugfest with an enziguri, but Takahashi runs him down with a clothesline for two. Naito fires back with a Rolling Koppou Kick and a Dragon Suplex for another nearfall. He hits Gloria and the STARDUST PRESS, but wants a tapout as he applies PLUMA BLANCA. Naito is successful. (11:17 shown) Naito is an inspiring character and all, but he isn’t what I would call a standout wrestler that makes you believe he could hang with the IWGP heavyweight champion and the other contenders no matter who you put him over. ***¼ 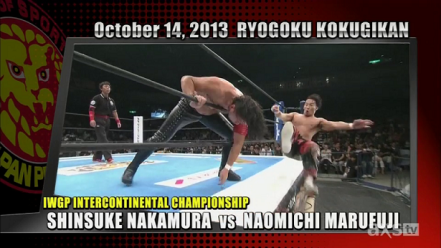 My boy Marufuji says he’s here in New Japan for Nakamura’s head. Some fun mat stuff to start. They get into a lockup position and as Nakamura holds Marufuji against the ropes, Marufuji backs him away with some pectoral dancing. Both guys go for a series of kicks with nobody connecting leading to a stalemate. Nakamura catches Marufuji and knees him a couple times in the corner. He grinds his boot on Marufuji’s face, but Marufuji NO-SELLS and backs Nakamura up. Elbows are traded which turns into a Marufuji clothesline. Over to the edge of the apron, Marufuji drops Nakamura with a piledriver! As best he can without killing Nakamura, that is. A cravat leads to a headscissors on the mat. Nakamura makes the ropes, but Marufuji wants to hit the sliding dropkick that Roman Reigns now does with Nakamura draped on the second rope. Both miss their shots on each other, but Marufuji flies back in with a slingshot backcracker. That gets two. They start exchanging blows ending with a head kick by Nakamura. Another series of running knee strikes gets two on Marufuji. Nakamura hits a gourdbuster, but Marufuji elbows him away and cartwheels away from a whip to surprise Nakamura with a dropkick. He then avalanches Nakamura in the corner and double stomps the face. Superkick gets two. Marufuji looks to tap out Nakamura with the COBRA CLUTCH AND BODY SCISSORS hold. With Nakamura all tied up, Marufuji takes him over with a cutthroat leg hook back suplex for 1-2-NO! Another superkick and he tries for SHIRANUI. Nakamura shoves him off and buries a knee. Marufuji flips out of the Reverse Powerslam and goes for the SHIRANUI, but Nakamura crotches him up top into the tree of woe. Backcracker by Nakamura sets up the Reverse Powerslam he wanted. Marufuji avoids the BOMA YE and places Nakamura in the tree of woe. He looks for the COAST TO COAST, but Nakamura sits up to avoid it. Nakamura elbows down the SHIRANUI KAI and delivers the BOMA YE from the second rope. Marufuji catches Nakamura charging with an enziguri and gets the SHIRANUI after all for 1-2-NO! TIGER FLOWSION could be knocking on Nakamura’s door, but he shoves Marufuji back into the corner. They duck each other’s blows, but Nakamura finally lands a spinning heel kick. Marufuji fires back and looks for TIGER FLOWSION again. He still does not get it. Marufuji counters a Death Valley Driver with an inside cradle for 1-2-NO! Nakamura absorbs a knee from Marufuji and delivers a head kick of his own. BOMA YE! Give him one more. Cover, 1-2-3. (16:18) This was the Marufuji that I knew and loved from years ago as he seemed to be at the top of his game here. Afterwards, Minoru Suzuki and his Pancrase Army comes out and challenges Nakamura to a match. Of course, YEAH-O! They always show Suzuki challenging a guy, but we’ve only seen him actually wrestle once in a throwaway six-man. ***¾

NEXT WEEK: We head to the January 4 Tokyo Dome show for Wrestle Kingdom 8. With a double main event card, we will witness the first main event between the challenger Tetsuya Naito and the IWGP heavyweight champion Kazuchika Okada.