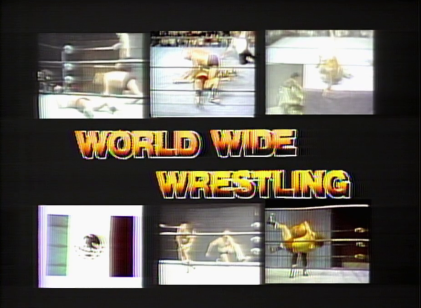 Your hosts are David Crockett and Johnny Weaver.

Ricky Steamboat, Jack Brisco, and Wahoo McDaniel come by to introduce a video that shows how happy Jimmy Valiant is now. Since Jos LeDuc smashed his other radio, all the good guys put their money together and got him an early Christmas present: a Panasonic RX-5010 boom box. What a bunch of nice guys! They have decided to stick together against these House of Humperdink people. Brisco says his brother Jerry will be coming in to face Greg Valentine and Paul Jones to see who is the best at the Figure-Four. Wahoo is looking forward to beating up Abdullah the Butcher! He’ll take a beating, but he’s a tough dude.

Before the match, Dalton says he’s found the secret to beat Wahoo. Dalton is actually a REALLY GOOD TALKER. HOLY CRAP. After doing a little research, I found that he was actually an NWA undercard guy since the 1960s wrestling all over the south. Alexander on the other hand is not a good talker. Things are going just fine for Wahoo and Brisco until Alexander breaks up an abdominal stretch from Jack. Wahoo comes in and applies the same hold on Dalton and even takes him to the mat to roll him up, but Alexander breaks up the pin with knees to the kidneys. Not sure where Dalton and Alexander showed that they were convinced they knew how to beat Wahoo, but anyways. Brisco whips Dalton in for a WAHOO CHOP and delivers a suplex for the pinfall at 5:42.

Talk about overexposed at this point. Humperdink basically manages all the main heels on this show. Ritchie frustrates Jones real bad to start with COUNT EM THREE slams in a row. Jones comes back in the ring and tries to slam Ritchie, but Jones collapses and Ritchie scores a nearfall. Jones kicks low on Ritchie and uppercuts him in the mouth to stop Ritchie. Tag to Valentine, he doesn’t mess around with this Ritchie character. He slams and elbows Ritchie around before giving Jones another chance. RITCHIE JUST WILL NOT QUIT THOUGH. However, Jones gives him a back suplex and Valentine drops the hammer on the poor guy for the win at 6:02. Mike Davis wrestled all of five seconds in this one.

Sir Oliver Humperdink talks with David Crockett. He’s got good news and bad news. Sgt. Slaughter returning to the Mid-Atlantic area is good news, which is bad news for the crybabies around here like Wahoo McDaniel and Ricky Steamboat. Humperdink wants to be his manager. OF COURSE HE DOES. Greg Valentine gets on the stick and tells us that the only reason he came back from New York City was for Wahoo McDaniel. They are doing a thing with Valentine and Jones against Brisco and Wahoo to prove who the better team is at the Figure-Four to headline Greensboro Coliseum. Jones comes over and gets super racist saying that he found out he had some Indian blood in his family tree. At first he was concerned, but then was told that it was so far up the tree that there’s not enough Indian blood in him to make him a coward. Valentine looks forward to taking Wahoo’s U.S. title because he’s in the best shape of his life right now. BRING EM ON, BRISCOS AND WAHOO!

Before the next match, Jos LeDuc doesn’t care about the new radio Jimmy Valiant has. He wants the NWA TV title because LeDuc thinks he’s a better man than Valiant. Well, even I would agree there. Valiant’s life looks to be a complete mess. If Ivan Koloff was a thorn in Valiant’s side, LeDuc will be his shadow.

Yes, this is the Iceman before the braids and the WCCW success. Weaver mentions he was one half of the Mid-Atlantic tag champs with Porkchop Cash for a brief period back in the spring of 1982. Meanwhile, Crockett discusses how irritating Valiant’s radio is to Humperdink. LeDuc just has a ROUGH style as he dominates Parsons. He does catch Parsons with a nice dropkick to the head, but finishes him with the ONE-ARMED BACKBREAKER for the win at 5:22.

Leroy Brown takes over Crockett’s mic and talks about how much he loves money and Humperdink. He’s tired of Brisco, Wahoo, and Steamboat crying about being beat up in the parking lot. Wait, WHAT? Time to go to the ring.

This is about a year or so before he joined the Nation of Islam and became one-half of the Zambuie Express with Ray Candy. Anyways, Brown turned on Porkchop Cash to join the House of Humperdink, so this is the blow-off for that feud. Not much of a match though as they go back and forth with forearm smashes and headlocks. Brown finally slams the guy and delivers a running elbow for the win. (5:10) Poor Porkchop Cash. ½*

Renoso and Bey stumble through their interview with David Crockett. Renoso says he’s sick and tired of Steamboat and Youngblood. He thinks Youngblood is lying about his Indian heritage and says Youngblood is actually Puerto Rican, which is pretty funny.

Rotundo sweats all over Renoso to start. He and Steamboat take turns working brief face in peril segments. This feels like those WCW Saturday Night matches in the 1990s where the State Patrol would wrestle Bagwell and Patriot or another babyface team. They would get the crap beat out of them, but ultimately you knew Stars N Stripes would win. Of course being the greatest babyface of our time, Steamboat can make even these two slobs look credible. Rotundo finally gets a fresh tag and flying shoulderblocks the crap out of Ali Bey. He follows up with an awkward looking running legdrop and pins Bey at 6:57. Ali Bey could not have been more than five foot tall.

More talk from Sir Oliver Humperdink, Leroy Brown, and Jos LeDuc to close out the show.