This is Bret’s first match on Raw in eight months. The last match he had was on March 18 when he defeated Tatanka. Vince asks JR what he thought about Bret’s performance at Survivor Series. He thought it was very good and was surprised that he still had fuel in the tank after 25 minutes. Vince says that some might say his performance was “a little shy of being stellar” against the likes of Stone Cold. MONTREAL SCREWJOB IS A WORK, PEOPLE. Bret and Owen work off wristlocks and hammerlocks to start. We see that Davey Boy Smith is watching on the monitor backstage. Owen catches Bret with the kitchen sink knee and beats down Bret in the corner. He whips Bret from corner to corner and lands a backbreaker. Belly to belly suplex gets two. The deadly enziguri kick takes us into commercial. When we come back, Bret mounts a comeback with the Russian legsweep for two. Vince mentions how we are possibly entering a new era with Psycho Sid as WWF champ. Yeah, a new LOW. Backbreaker and elbow drop sets up the headbutt to the groin for a nearfall. Bret kicks out of an O’Connor roll and sends Owen to the floor. Back inside, Owen tries a sunset flip only for Bret to roll through and apply the SHARPSHOOTER. Oh wait, here comes Stone Cold Steve Austin to whack Bret with a chair for the DQ. (9:27 shown) Better than most matches, but not as good as others. Afterwards, Owen is perfectly fine with Austin pillmanizing Bret’s leg until Davey Boy Smith comes out and puts a stop to it. Growing weary of this interference, Austin whacks the Bulldog out cold with the chair, which now Owen takes offense at. Well, Austin doesn’t really give a crap, and walks out. ***

Knowing what we know about Terry Gordy, this match is just hard to watch. Tracy Smothers does what he can to make Executioner look good, so kudos to him for that. During the match, Dok Hendrix appears on the split-screen to tell us that Austin has wisely left the building, but it doesn’t mean he won’t be back. Dok is trying to get an interview with Owen and/or Bulldog right now. ORIENTAL SPIKE takes care of Freddie Joe at (AUSTIN) 3:16.

We now go to Jose Lothario’s home where Shawn Michaels is there hanging out with him on a love seat. Vince asks Jose about his condition. Before he tells us about his heart condition, he apologizes to Shawn and to the fans for being part of the reason HBK’s WWF title reign came to an end. Shawn has a sympathetic reaction towards Jose for feeling that way. Jose tells us he will need some heart work done and will have to lay low for a while. While he will receive a WWF title shot at the Royal Rumble, Vince wants to know if the boyhood dream that was realized back at WrestleMania 12 has now been shattered. Shawn admits that maybe he lost his edge over the last eight months and that is his fault. Shawn will not let Lothario take any blame or make any excuses for what happened at Survivor Series. HBK can be the WWF champion again, but Jose Lothario can’t be replaced. Lawler speaks and tries to pin the whole thing on Lothario, but Shawn stands up for his mentor and says that Lothario can stick his nose wherever he pleases because he’s been in the business for thirty years. If Sid can beat him man to man, Shawn says he would be man enough to shake his hand, but Sid didn’t do that. He beat up a 62 year old man. Shawn wants Psycho Sid in San Antonio and doesn’t care about facing Bret Hart at the Royal Rumble. Vince asks Shawn if the MSG crowd at Survivor Series threw him off for cheering Sid louder than they cheered for him. He wants the people to be behind him, but he will not beg to anybody or anyone at any time. He will be the WWF champion because he wants to be, because Jose Lothario believes in him, and the people he cares about most believe in him. Whether or not you’re on his side, that’s fine by him. Vince thinks Shawn is being rather defensive. Shawn says he’s going to be even more of a risk taker, even more flamboyant, and he’ll do what he wants when he wants to do it. If somebody wants to do something about it, just try him on any time because he’s had enough. No more Mr. Nice Guy. He can play just as dirty as anybody – just ask around. How about the Royal Rumble in your hometown, Shawn? He’s going to kick Sid’s teeth down his throat and there’s nothing he or anybody else can do about it. Well, maybe Bret can do something about it in December.

Time for some more Karate Fighters. Having more charisma, Sunny wins over Sable. Oh, but then she gets caught for cheating and the decision is reversed.

Sunny joins us for commentary. Well, she wants a closer look at Rocky Maivia. On the split-screen, we see Captain Lou Albano and Don Muraco putting over Maivia during the recent Hall of Fame ceremony. Lawler doesn’t believe those were sincere (no pun intended) endorsements at all. By the way, I should note this is Maivia’s in-ring RAW debut. Back to the split-screen, Dok Hendrix talked with Bret Hart without the cameras since he’s pretty disoriented. Dok and Bret agree that he has one major obstacle here in the WWF and it’s not the WWF title match with Psycho Sid, it’s Stone Cold Steve Austin. Essentially, this place isn’t big enough for the both of them. In the ring though, Maivia is handling Sincere pretty well. Lawler thinks that Rocky may have been the inspiration for the Chia Head figurine. Vince asks Sunny if she would like to show him the ropes. Sunny says she would like to show him a few other things besides the ropes. Lawler gets a little jealous and seems to think that Sable is starting to look a little better to him all of a sudden. HA! Pretty dull match, but it’s not like Rocky is super experienced right now. SHOULDERBREAKER takes care of Sincere at 4:28. 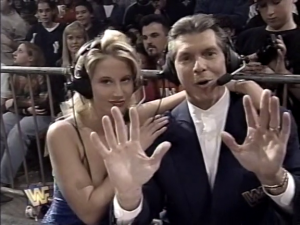 Time for a hand check.

In the back, Vince asks Marc Mero if he’s concerned that Hunter Hearst Helmsley will be doing color commentary during his match. It might be a little distracting, but he’ll punch Helmsley right in the nose if he gets involved. TIME TO GET WILD!

Over to Dok Hendrix, he says that while things have cooled down between Owen and Bulldog, Davey Boy wants a piece of Steve Austin. Hendrix says it seems Austin was successful in creating a major upheaval in the Hart family. Seems like all Austin did was just create more enemies for himself.

Being the new heel on the block, Billy BUM RUSHES THE SHOW only to receive a tilt-a-whirl headscissors and clothesline out to the floor. Mero heads out and double sledges Gunn from the apron. Helmsley distracts him for a moment. Back inside, the slingshot legdrop gets two. MEROSAULT gets two. The crowd is absolutely dead and we’re only two hours into a four-hour taping. Gunn fires back with a Rocker Dropper and beats Mero down in the corner. He grabs a chinlock and puts his feet on the ropes. Gunn knee drops him for a nearfall. He follows up with a reverse neckbreaker, but only gets two. Billy gets crotched up top as we go to commercial. When we come back, Mero hits the super headscissors for two. Sensing Gunn is in trouble, Helmsley gets up and approaches Sable, which brings out Mero to the floor. This leads to a 2-on-1 attack on Mero for the DQ. (8:07 shown) Wow that was boring. Jake Roberts runs out for the save to wake up the audio sweetener guy. ¾*

And that’s all she wrote. Meanwhile on Nitro, a Lord Steven Regal squash got higher ratings than that main event.