From somewhere presumably in Japan, Pentagon Jr. talks to his Master about what to do with Vampiro since he refuses to face him at Ultima Lucha. There’s a voice changer for the Master (who does speak English) so we do now know that he does exist even if only in Pentagon’s mind. Anyways, the Master instructs Pentagon to go after Vamp’s ego. Pentagon calls out Vampiro by his real name declaring to his Master that he will be his sacrifice.

They are just unloading on each other to start. Cage slows down Mack with a powerslam and misses a Lionsault to take a sliding kick to the face. Mack does an incredible walking vertical suplex for two. Cage shows off with a stalling suplex of his own. Mack fires back with a flying knee and avalanches Cage. Over in the corner, Mack levels Cage with an exploder into the buckles. Frog splash hits the mat as Mack stumbles up into a Discus Lariat for 1-2-NO! Mack avoids a powerbomb though and spin kicks Cage back. HERE COMES MACK! They trade boots and Superman Punches before Mack rolls up Cage and unexpectedly gets the three-count. (4:00) Just two big dudes throwing bombs. Not the best example of their charisma and athleticism though. For once in LU, they actually kept it all in the ring. *½

In the locker room, Catrina approaches Son of Havoc. Her Disciples of Death are coming after the Trios titles very soon. But tonight, one thousand deaths are coming for him. Is she going to lick his beard? Ivelisse appears and tells Catrina to back off. Somehow when Catrina disappears, Ivelisse ends up on top of Son of Havoc on the floor. Naturally, Angelico walks by and hopes those two aren’t getting back together. They both tell him to shut up like we’re watching some kind of 1990s NBC sitcom. We’ll be right back after these messages!

Earlier in the day, Vampiro interviewed Pentagon Jr. This doesn’t sound like it will go well. Vamp apologizes to Pentagon for getting in his business. His time has passed and now is Pentagon Jr.’s time. First and foremost, Vamp wants to know who the Master is. No response. Pentagon wants to know though if Vampiro is still Vampiro or is he a coward. Vamp gets all upset and tells Pentagon that he’ll throw down right now if that’s what it takes, but he has lost everything in his life due to wrestling except his daughter and won’t take any crap from this guy. He’s a better man now. He’s not who he once was. Vamp calls himself a 32-time world champion. I think he’s confusing himself with Jerry Lawler. Has he even won 32 different titles? Pentagon continues to goad Vampiro into agreeing to a match at Ultima Lucha by calling him weak and pathetic, but Vamp stays strong and silent even when he’s being punked and pushed around. It’s such a simple angle we’ve seen dozens of times in wrestling and I’m digging it all the way.

Son of Havoc is over like rover here. He wants to do his usual handspring elbows and what not, but Muertes is not having any of that, which does not bode well for Prince Puma come Ultima Lucha. Mil takes Havoc to the floor for some barricade action and throws him into a section of wooden chairs. To ratchet up the violence, Muertes gives Havoc a powerbomb on the announce table that won’t break. AWESOME. More ringside violence follows. Back inside, Havoc ducks a charge and sends Muertes flying to the floor for a tope suicida that takes Muertes off his feet. Back to the ring, Havoc hits a springboard double stomp and a standing moonsault for only a ONE-COUNT. Havoc heads up again and flies down into a chokeslam, but Havoc counters in mid-air with a back flip! Muertes comes back with a right hand to stop Havoc. Back to the corner, Havoc fights off a superplex and goes for the SHOOTING STAR PRESS, but Muertes rolled out of the way. Meanwhile, Catrina eyes Angelico and Ivelisse tries to stop this situation. The Disciples of Death appear behind Angelico and beat him up. Meanwhile, Catrina chokes down Ivelisse and hits her with the Aztec stone. WHAT. Havoc saves Angelico with a Space Flying Tiger Drop to rile up the crowd. Back in, Muertes runs him down and delivers a SPEAR and the FLATLINER for the win. (7:09) Even though Muertes is already over the top, I think he needs a better finish than the Flatliner. Really fun little match as we see Muertes in his violent glory while also setting up issues for Ultima Lucha between the Disciples of Death and the Trios Champs That Don’t Get Along. **½

Next up, Texano comes out and talks about what a piece of crap he is. His own family doesn’t even trust him. He’s not an awesome guy like the legend Blue Demon Jr. Nevertheless, Texano does love sus Mexicanos. On the other hand, he hates Chavo Guerrero and wants to break the man’s other leg. Well, here comes the Crew to answer on Chavo’s behalf. They beat him up until Blue Demon Jr. runs the Crew out of the ring. Next thing we know, they are sliding Blue Demon a chair to whack Texano over the head. HEEL TURN~! Blue Demon shouts at Texano that he is Mexico as though he’s trying to convince himself.

Striker calls El Patron the Einstein and his teammates the Enola Gays that are about to drop the bombs. WOW. It looks like we’ll get Alberto and Johnny to start, but Mundo ducks out and tags Evans when he isn’t looking. Evans does some fancy dancing and gets slapped down to the mat. Tag to Aerostar, he enziguri kicks Evans down and delivers a double knee stomp from the top. Super Fly tags in and receives a satellite headscissors from Aerostar. Here comes Drago who armdrags Super Fly around and baits him out to the floor. Drago dares Hernandez into the ring. He kicks down Hernandez and tags in El Patron. Mundo kicks El Patron from the apron, which causes El Patron to give chase and get attacked on the floor by the whole crew. Back inside, Mundo takes his opportunity to take control over El Patron. When Mundo misses a corner charge, he tags out to Super Fly who gets kicked in the mouth. Aerostar takes out Super Fly and Drago helps out kicking Jack Evans to the floor. With those two on the floor, Aerostar does almost a pump splash using the top rope. It’s incredible. With they all stand back up, Drago does a corkscrew moonsault on the whole pile. Hernandez joins the group for Sexy Star to dive on everybody. Will Alberto fly? Nope, Mundo cuts him off to which El Patron has had enough and chases Mundo up the stairs. Back in the ring, Evans kicks Aerostar in the head just as he’s about to put away Super Fly. El Patron and Mundo return to the ring. I think I would have just let them stay in the back.

Hernandez gives Aerostar an Alpha Bomb for two. Tag to Mundo, he hits Aerostar with the running knee to the skull. Aerostar flips out of a back suplex and rolls up Mundo, but not before Mundo reaches out to Evans for a tag to negate any kind of a pinfall. That’s so 1980s. I love it. Handspring elbow catches Evans and despite Mundo’s best efforts, Aerostar makes a tag to Sexy Star. Mundo ain’t buying what she’s selling. Evans grabs Sexy by the hair, but heel miscommunication ensues and Evans gets nailed by Mundo. Tilt-a-whirl headscissors by Sexy takes over Mundo. Super Fly totally misses a handspring elbow and gets beaten up by Sexy. Hernandez peels her off Super Fly and gives Sexy a backbreaker. Drago comes in and delivers a tilt-a-whirl DDT to Mundo. Now Drago gets triple-teamed, but here comes Alberto for the save. Backcracker to Hernandez! Tilt-a-whirl backbreaker to Super Fly! CROSS ARMBREAKER to Evans! They are right in the corner though as Mundo hurries in and breaks up the hold with the END OF THE WORLD. Sexy Star tries a flying bodypress on Mundo, but he rolls through and grabs a huge handful of panties for the victory. (9:27) Not exactly a strict atomicos rules match as it is done in traditional lucha libre, but that’s fine. Since we’re not used to them, it would probably be more confusing than anything else. Lots of action though, for sure. I don’t know how much the match advanced or even established the feuds heading into Ultima Lucha besides Mundo and El Patron though. Despite being announced for Ultima Lucha tonight, Drago and Hernandez didn’t have a whole lot of interaction to make their issues seem any more heated. ***¼

It looks like we’re wrapping things up for another week when Pentagon Jr. appears and kicks Vampiro around. He REALLY wants this match. I can tell because he pulls out a GASOLINE CAN and starts pouring gasoline all over Vampiro. He gives Vamp one week to decide. If he doesn’t choose to accept his challenge, the world will see him burst into flames. One way or another, Pentagon will make this sacrifice to his Master. Well, that’s the coolest and most serious thing I’ve seen on wrestling this year. 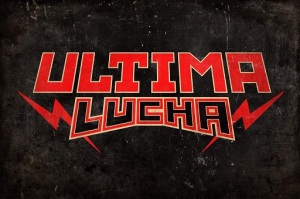 Ultima Lucha – the two-hour season finale of Lucha Underground – premieres August 5 only on the El Rey Network. Here is the card as it stands on July 8: