If Helmsley gets DQ’ed or counted out, he will lose the IC title. Goldust and Marlena appear in the crowd to watch the match. Ross announces that Goldust will face the winner of this one at the Royal Rumble. Mero is a HOUSE OF FIRE to start as Helmsley bumps around like he’s in a pinball machine. They go to the floor where Mero chases Jerry Lawler all the way to the back. That little piece of business actually makes things worse for Mero as Helmsley comes at him from around the side of the ring with a big shot. Hunter considers a chairshot to Mero, but thinks better of it. Back in, Mero takes back control with more of the same stuff. Helmsley finally has enough and throws Mero over the top rope before giving him a baseball slide. He bounces Mero’s face off the steps and then beats him on the apron, but then Mero leaps back in with a sunset flip for two. The Flair-Steamboat backslide sequence ensues and Mero scores another nearfall. Helmsley cuts him off with a clothesline as we go to break. AND WE’RE BACK. Suplex and knee drop from Helmsley gets two. Mero comes back with the tilt-a-whirl headscissors and the Mr. Wrestling II knee lift. Missile dropkick gets two. He looks for the MEROSAULT, but Hunter ducks out of the way. With Mero staggering, Helmsley delivers the PEDIGREE for the win. (6:29 shown) Afterwards, Mero is PISSED. Not sure why since he lost clean here. Ross remarks that Mero needs to get to the back of the line now. I miss wrestling comments like that. Once Mero is sent away, Helmsley gets on the mic and directs some “real man” comments towards Goldust and Marlena. Goldust stands up and chases Helmsley to the locker room before returning to Marlena and exiting stage right. **

Let Us Take You Back: Last week, Monday Night Raw – Billy Gunn’s match-ending injury against his brother Bart. Ross calls Billy “injury prone” throughout his WWF career. Temporary paralysis has been the diagnosis, says Vince. We hear some of Bart’s apology to Billy from Livewire over the weekend. The Gunn family is PISSED at him!

Rematch from the Free For All show at In Your House. Sunny joins the commentary table in a Santa-themed outfit. Of course, she’s out here to get a closer look at Rocky. She will be on MTV’s “Singled Out” this coming Friday night. Why is Salvatore Sincere with Cornette? Ross tells us that Rocky turned down Jim Cornette’s offer to manage him. Vince hypes the debut of Shotgun Saturday Night scheduled for January 4. Rocky shows off his agility to start with his leapfrogs and dropkicks. Sincere stuns him with a side slam for two. He connects with a jawbreaker and works the head with a clothesline. Russian legsweep gets two. From there, Rocky makes his comeback and hits the Hurricane DDT to set up the SHOULDERBREAKER for the win. (5:48) Interesting that his setup to the finisher move is more exciting than his actual finisher. Not much you can say here besides Rocky being green. Sunny gets what Sunny wants – and Sunny wants Rocky Maivia. Whoa! ¾*

Vince McMahon welcomes the WWF champ Psycho Sid to the ring. He asks Sid about the attitude change of Bret Hart, but Sid changes the subject about beating both Shawn Michaels and Bret Hart in thirty days. How did he do it? It’s simple: he’s the SUPER PREDATOR of the WWF. He’s also the master and the ruler of the WORLD. Shawn Michaels appears on the split-screen watching the monitor not showing any expression. Sid points out that his intimidating stature will not change anytime soon. He will continue being 6 foot 9 and over 300 pounds. JR – “This man is a little nuts.” Nuts? He’s PSYCHO, Jim.

Time for some AAA action! Ross calls Cibernetico a young phenom. Mil Mascaras has joined the SAT for some comments. All three of these luchadores will be in the Royal Rumble. Pierroth controls Cassidy to start with chops and the Mascaras flying chop. Tag to Cibernetico, he works with Jannetty now. JR does what he can to explain the importance of the mask and even corrects Vince when he makes a comment about how all luchadores are high-flyers in lucha libre. Short heat segment on Cibernetico takes us into commercial. When we come back, Cibernetico makes his hot tag to Pierroth. Of course nobody in Tampa knows who these guys are, so the reaction isn’t exactly LOUD. He powerbombs Jannetty for two. Cibernetico dumps out Cassidy for a tope suicida. Back in the ring, Pierroth splashes Jannetty from the top and scores the win. (4:54 shown) The New Rockers argue with each other a little bit, but no time. JR has to interview Mil Mascaras about the importance of wrestling at the Alamodome. *½ 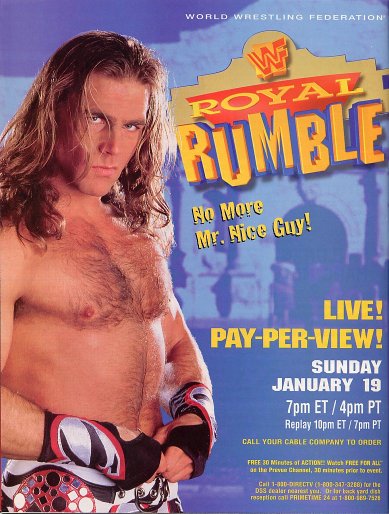 Royal Rumble entrants include: Hunter Hearst Helmsley, Flash Funk, the British Bulldog, Ahmed Johnson, and the Undertaker. Well, I believe Bret Hart announced last week he would be in the Rumble match, but no graphic for him just yet.

Honky Tonk Man joins the announce table for tonight’s main event. He returned to the WWF the day before on Superstars saying he would be here tonight.

Honky says he’s here to find one man to take over as the greatest singer, dancer, and Shake Rattle and Roller. Something like that, anyways. After some wristlocks, Bret turns up the heat in the corner. Razor fires back with knees and chokelifts Bret. To the floor we go, Bret takes over and gets AGGRESSIVE throwing Razor into the steps and guardrails. He even makes Razor taste the ringpost as we go to commercial. When we return, Bret hits the running bulldog and the flying elbow to set up the SHARPSHOOTER for the win. (7:16 shown) Razor was game to give us a taste of Bret’s new attitude. Nothing special though. *½

To the back to close out the show, Vince asks Shawn Michaels his impression of Bret’s victory. Shawn wasn’t surprised that Bret won. Then Vince brings up Psycho Sid and his confident attitude. Shawn is confused as to what Vince means by all this. Vince just points out that Shawn’s attitude seems different from their attitudes. Shawn makes no excuses for Sid being the WWF champ, but excuses are all that come out of Bret’s mouth. Shawn says he will be prepared for anything – and that’s the way he is coming to San Antonio for the Royal Rumble. If he gets beat, he’ll take it like a man. It won’t happen though. He promises to win – like a man.