Your hosts are Michael Cole and JBL.

Edge starts the show – even though a member of the RAW roster. He reminds us what happened when he won the first Money in the Bank briefcase in 2005 and beat John Cena to become the WWE champion and says it’ll happen again this year whether we like it or we don’t. That’s when Matt Hardy interrupts and Edge looks concerned. Edge informs us that he and Matt will be wrestling tonight, but Edge decides not to wrestle and offers Matt an alternative: the GREAT KHALI. Oh boy. Edge has a good laugh and hangs around ringside to watch Khali do what Khali does.

Khali looks to make short work of Matt Hardy. When he goes for the TREE SLAM, Kane’s pyro goes off. No Kane, but that doesn’t stop Khali from going to find him. Let’s say 1:20 for the sportz entertainment finish. Kane appears on the TitanTron and holds up the hook before saying TWO MORE DAYS and maniacally laughs.

Over in Teddy Long’s office, he gets off the phone making what sounds like some romantic reservations when Kristal stops by. Because she’s been interviewing so hard (?) and competing in the ring even harder, Teddy is taking her out for a little dining and dancing. She’s pretty pumped about the plans as Teddy refers to himself as a BMW: black man working. HAHA! He’ll be late tonight because he has to stick around for the big interview later with the Undertaker and Batista. Kristal doesn’t seem to mind. What a gal!

The first of THREE Money in the Bank competitor showdowns tonight. They go in and out of the ring with a tie-up to start like Kennedy is Chris Benoit now. After some brief mat stuff, Kennedy takes Finlay over to the corner for the Running Facewash. A turnbuckle pad gets removed and Finlay gets the worst of it as he gets run into the exposed corner to set up a Finlay Roll by Kennedy for two. Finlay fights back with some rough stuff on the apron. Back inside, he misses a corner charge and gets rolled up for two. Kennedy brings the 20-foot ladder from ringside into the ring and fails to do anything productive. While the ref is busy with Finlay and getting the ladder out of the ring, HORNSWOGGLE comes out from under the ring with a midget ladder and delivers the KENTON BOMB off the ladder to Kennedy. That derby hat must be glued on his head. Kennedy sells the move and staggers into the CELTIC CROSS to give Finlay the three-count. (5:57) Well, you know Kennedy is winning MITB now. *½

They replay the video package highlighting Mr. McMahon’s victory over Bobby Lashley last week on RAW. We will take a look at the WrestleMania 23 press conference tonight involving Donald Trump, Stone Cold Steve Austin, and Mr. McMahon. It should be yuuuge.

Maryse vignette. Nothing comes between her and Friday Night Smackdown.

MVP introduces his opponent to us as the Ethiopian heavyweight champion. He looks like Crabman from My Name Is Earl, but this guy is a spear-wielding native. In TNA and on the indies, he was known best as D-Ray 3000. Apparently, MVP has been beating up jabronis lately that he said were from various countries all over the world trying to impress us all. MVP mocks Chris Benoit – his opponent for WrestleMania – and puts away Viko with the PLAYMAKER to win the match at 1:31. After the bell, MVP says the countdown to WrestleMania has officially started. He’s made FIVE PPV appearances, will make the man who says he’s 4-REAL go down for the THREE count. In just TWO days, there will be ONE new U.S. champ. Weird he went the G.O.B. route to prove his point, but okay.

TWO WEEKS AGO ON SMACKDOWN: Undertaker got mad and threw Finlay at the world champ Batista! Tonight with just two days until WrestleMania, they will *talk* to each other!

The second of THREE Money in the Bank competitor showdowns tonight. Hardy wears down the arm of Orton to start. Orton eventually has enough and gets Hardy in the corner to catch him with a right to the jaw. Hardy comes back with the sitout gourdbuster for two. Orton fights back after a ten-count corner punch and abuses Hardy in the corner. He whips Hardy in and ducks under a floatover, but comes back around and wallops Jeff with a clothesline. As Hardy rolls to the apron, Orton knocks him off onto the barricade to take us into commercial. AND WE’RE BACK! Orton has the dreaded chinlock of DOOM applied. He gives Hardy the Garvin Stomp and then stand him up only to dropkick him back down. After some abuse on the apron, Orton goes back to the chinlock. Hardy avoids a knee drop though and hits a Sling Blade. He mounts his comeback with clotheslines and a mule kick. Orton retreats to the corner and receives the slingshot dropkick for two. Whisper in the Wind gets two. Orton rolls away before the Swanton Bomb can happen and yanks Hardy out to the floor for a breather. Next thing we know, Edge comes down to ringside and punts Hardy in the ribs. Orton doesn’t like that a darn bit and tells Edge to leave. Back inside, Orton readies himself to hit the RKO, but he’s too distracted by Edge. Hardy then comes over and rolls up Orton for the 1-2-3! (11:57 shown) This did what it set out to do which is create more tension around the complicated relationship between Rated RKO while also having a decent match between two MITB guys. I liked this okay. Good back and forth action. **½

LAST WEEK ON SMACKDOWN: Batista threw King Booker into the Undertaker! Tonight with just two days until WrestleMania, they will *talk* to each other!

Next, Michael Cole and JBL run down the WrestleMania 23 card.

This should be a clusteryouknowwhat. Mickie James becomes *your* Diva in peril. Victoria misses a flying moonsault to set up the hot tag to Candice. She does her Go Daddy twirl and drops an elbow on Victoria for two. Tag to Maria, she gives Victoria the bronco buster. Torrie wedgies herself and gives Victoria a stink face. Tag to Ashley, she *runs wild* on the heels except Melina wants nothing to do with her. Ashley counters a powerbomb from Jillian to a (sort of) hurracanrana for the three-count. (3:32) This was not as bad as you might think. Not good, but not really a clusteryouknowwhat. Ashley is the worst though and she’s the one getting the Mania match. ¾*

The THIRD and final Money in the Bank competitor showdown of the night. Booker abuses Punk back into a corner, but Punk comes fighting out with punches and kicks of his own. Booker cuts him off with a hotshot and lands a superkick for two. He delivers a Sidewalk Slam and applies a chinlock, but slams Punk down by his hair when he starts to elbow out. Lots of pointing at the briefcase hanging over the ring. Booker applies an overhead wristlock and bodyslams Punk when he tries fighting out. As Booker leans over to pick up Punk, he takes a kick to the head. Punk manages a swinging neckbreaker and gets fired up with kicks and clotheslines. An enziguri to Booker gets two. Punk hits the running knee into the corner and tries the running bulldog, but Booker counters to the Hook Kick. Booker tries to put Punk away with the Scissors Kick, but Punk won’t have any of that and rolls up Booker with a bridge for the shocking three-count. (6:38) Pretty good match. We saw some nice counter wrestling there that reminded me of Punk’s matches with Cena a little bit. **

We get some clips from the WrestleMania 23 press conference. The main thing to take away from this footage is that Donald Trump – future POTUS – slapped Vince McMahon across the chops. This is whole thing between Trump and McMahon is no doubt even more hilarious in retrospect than it was in 2007.

It’s Main Event Interview Time. They have billed this showdown between Batista and the Undertaker as the Biggest Interview in Sports Entertainment History. So what WWE is saying is, this interview is bigger than the Rock/Austin interviews, bigger than the interview with Vince after Montreal in 1997, bigger than the Shane interview on the Nitro simulcast, and bigger than Hogan and Andre on Piper’s Pit – bigger than ALL of them. I realize they have to put things over hard on the final go-home show before WrestleMania, but that’s pretty insane. Before we get started, JBL heels it up saying he can’t wait to see Donald Trump get his head shaved at WrestleMania. JBL compares himself to Edward R. Murrow and Walter Cronkite before Stone Cold Steve Austin arrives unannounced. Austin gives JBL a STONE COLD STUNNER and pours beer all over his face before eventually leaving with more beers.

When we come back, Smackdown GM Teddy Long is in the ring with tons of security to keep the world champ Batista and the Undertaker separated. Teddy wants to know if Bats respects Taker. He says “no”. Compelling! Taker says nothing in response. Gripping! Teddy then wants to know what it will take for Batista to beat Taker. In 48 hours, Bats will whip his ass. Fascinating! As Taker removes his trench coat and hat, Batista pushes through the lamest security crew ever and goes after Taker. We have a SUPER INTENSE pull-apart brawl to end the show. Bats stands tall as he drops Taker with a Spinebuster and walks out shouting about what he’s going to do in 48 hours, but then Taker sits up and runs his thumb across his throat to signify Bats will soon REST – IN – PEACE! Yeah, not the Biggest Interview in Sports Entertainment History. I will say it was a fun showdown though.

Until WrestleMania 23, that does it for the Ten Years After series! Look for that on April 1! 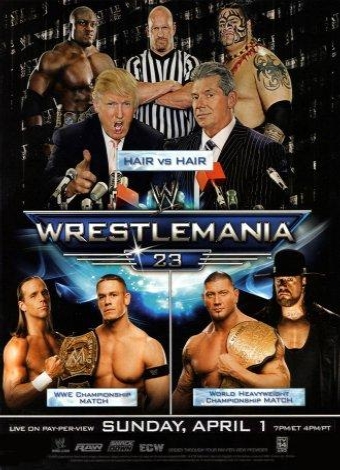