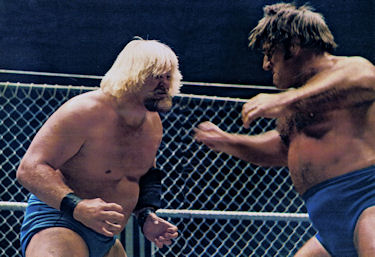 Pop Culture #1s of the Time:
#1 Movie of the Week: The Omen starring Gregory Peck and Lee Remick
#1 Song of the Week: Don’t Go Breaking My Heart by Elton John & Kiki Dee
#1 TV Show of the 75-76 Season: All in the Family starring Carroll O’Connor

Your host is Vince McMahon. He’s pretty excited tonight as Bruno Sammartino returns to the Garden to get his hands on Stan Hansen – INSIDE OF A STEEL CAGE.

Can’t really find any info on Cadiz other than Vince’s comment about this being his debut in MSG. Rivera gets Cadiz all excited with a series of armdrags to start. Cadiz gets some cheap punches in behind the ref’s back and rakes the face to stop Rivera. He picks Rivera up on his shoulders looking for an airplane spin, but chokes Rivera with his left hand. Well, that’s interesting. The little old lady from ringside Mrs. Krieger lets Cadiz know he’s being a bad boy right now. Rivera does a nice flip away from a backdrop and dropkicks Cadiz to the apron. After he flips Cadiz back inside, Rivera gives him a slam and he begs in the corner. Cadiz is all about that fireman’s carry slam. Rivera has enough and rolls him up with his legs for a nearfall. They both miss splashes, but slow things down trading holds. Cadiz escapes a full nelson, but winds up taking a headscissors out of the corner by Rivera. To the mat, Rivera escapes a headscissors hold and delivers a hurracanrana, but misses a dropkick. Cadiz reverts to the cheap heel tactics and controls Rivera for a few moments. He ties Rivera up in the ropes for more abuse. Once Rivera breaks loose, he dropkicks Cadiz and puts him down for a chinlock. OK? Rivera catches Cadiz with a few dropkicks and follows up with a FLYING BODYPRESS for the win. (10:41) Cadiz looked pretty green, but Rivera was fun to watch and seemed ahead of his time. *

It’s the battle of the 1980s JTTS. Rodz rides Jones pretty hard to start and holds onto an armbar like you wouldn’t believe.  When SD finally gets free, Rodz punches and kicks on him. A punch to the head proves to be fruitless as SD starts a fiery babyface comeback. SD punishes Rodz with turnbuckle smashes as Rodz cowers away. Rodz manages to fight back and delivers a few flying stomps to the back and neck. STAY AWAY FROM THE HEAD. He’s a black man! SD comes back with punches and they wind up battling over in the corner. As Rodz grabs a waistlock, SD kicks off the turnbuckle and lands on top of Rodz. With both guys having their shoulders pinned, the ref counts the pinfall, but SD gets his left shoulder up before the count of three. (8:12) Ya know, that old finish. *½

FIRST FALL: This was supposed to be Jose Gonzalez and Haystack Calhoun, but DeNucci is here to sub for him. No Captain Lou this time. By the way, the Executioners are Killer Kowalski (#1) and Big John Studd (#2). Gonzalez is a tiny little man compared to the much larger Executioners. DeNucci gets a hot tag and nearly pins Executioner #1. He ends up getting cornered on the wrong side of town and beaten down by #2. While Gonzalez comes in, the Executioners both apply a stomach claw – because why not. Eventually, DeNucci fires back and hot tags Gonzalez as he and DeNucci run wild. They go for #1’s mask while he’s tied up in the ropes, but #2 makes it hard to get it off. DeNucci and Gonzalez whip them into each other for a huge reaction from the crowd. They are on fire in this match, by the way. Back in, DeNucci catapults #1 into a corner. Tag to #2, DeNucci slams him for two. Gonzalez gets involved again and runs #1 into the turnbuckle. While the ref is with Gonzalez, the Executioners deliver their DOUBLE BACKBREAKER to DeNucci to secure the first fall in 10:11.

SECOND FALL: #1 hammers DeNucci in the corner as the Executioners continue working on the injured back. This continues on for several minutes. Eventually, DeNucci whacks #1 back and tags in Gonzalez. The ref doesn’t see it, but doesn’t bother to get Gonzalez out of the ring. He’s got dropkicks for both the Executioners to put them out on the floor. Now they don’t know what to do. Back in, Gonzalez bounces #1’s head off the canvas time after time. He should be pretty well knocked out after two or three minutes of this. Tag to DeNucci, he decks #1 a few more times and then the AIRPLANE SPIN takes care of him as the good guys win the second fall in 17:40 total.

THIRD FALL: #1 is still very loopy from all that head damage. He gets clocked around by DeNucci and Gonzalez. When it looks like #1 was done, he reaches #2 for a tag. Gonzalez comes in and gets hammered from behind by #1. The Executioners look to lower the boom on Gonzalez, but #1 can’t make it to the top rope. He’s still dizzy from all the abuse and the Airplane Spin! Anyways, Gonzalez tags in DeNucci who runs wild on #2. He lifts up #2 for the Airplane Spin, but #1 kicks him in the gut. Gonzalez gets another tag and goes DROPKICK CRAZY. He picks up #2 for a slam, but #1 kicks them over with #2 landing on top of him for the three count. (22:54 total) Fun match as the psychology and heat was all there. **½

The undefeated Bruiser Brody is accompanied by the Grand Wizard to the ring as he makes his MSG debut in this squash match with Sullivan. Crazy to think that we have Brody and Hansen in the same promotion at the same time and they would be the top challengers to Bruno Sammartino. This is the first promotion where he had used the Brody character. Anywhere else prior to 1976, he just went by his name Frank Goodish. His finishing move is the TORTURE RACK as he submits Sullivan in 2:29. N/R

This was first announced as a 2/3 falls match, but gets changed immediately to just one fall to a finish. Ha, alright. Strongbow crisscrosses the ring with Tomayo leading to an armdrag and a big chop. Tag to Scicluna, of course he’s got a foreign object in his hand. They play around with that for a bit. This sets up BWW getting a tag, but he faces the same problem with Scicluna. As Strongbow gets a tag, he runs wild on the heels. The match breaks down, the Indians go on the WAR PATH, and BWW hits the DOUBLE CHOP on Tomayo for the win. (5:58) Pretty much a TV main event match. *½

This is only the second steel cage match ever inside Madison Square Garden. The first one took place in December 1975 when Bruno Sammartino defeated Ivan Koloff. It was a rather dull affair (here is a review…scroll down to the extras), but this one should have much more heat considering the situation. Hansen makes Bruno pay for taking his time getting into the ring, but Bruno comes right back on him with punches and bouncing his face on the steel. Hansen tries to take him out with the Lariat, but Bruno stops him short and kicks him in the gut. Crowd is turned up to 11 for this whole thing. Vince mentions that Hansen’s elbow pad might be loaded. Bruno knees the back a bunch and then sits down on a rear chinlock doing more damage to the back. Hansen fires back and walks to the door, but Sammartino chokes him back into the ring. A low blow puts Bruno down. Hansen climbs to the top buckle to try and climb out, but Sammartino grabs him by the foot and pulls him down to stomp him on the dick. WOW. Hansen continues to try and break away from Bruno as many times as he can to just escape and win the championship, but Sammartino is unstoppable. Hansen gets busted open as he’s run into the ringpost at one point. Bruno gets the “loaded elbow pad” off and puts it on like a mitt and starts punching him. This continues until Hansen is tied up in the ropes, bloody and beaten, and completely defeated. Bruno then walks out at the cage for the win. (11:11) What it lacks in fancy “moves”, this was an excellent revenge story told and very satisfying for the NYC audience. My personal favorite Bruno match right here. Imagine a loud mouth Texas bully coming into your town, breaks your favorite wrestler’s neck the first time he comes to MSG, gloats about doing it for months, and then you get this match where he’s just completely eviscerated. Now *that’s* a conclusion to a feud anyone could get behind. Hansen was pretty much rendered anemic as long as Bruno was champion in the promotion, but would return in 1981 to face a whole different type of man in Bob Backlund over the top prize in the WWF. ***

Gilbert jumps Bobo before the bell, but of course Bobo comes back with a pair of COCO BUTTS. As Gilbert goes through the ropes and to the floor, he decides to fight another day and heads for the curtain. Bobo wins via countout in :35. N/R

You can’t have one of these MSG shows without Ivan Putski, right? Akbar is announced as another undefeated guy here in the WWWF. Total headlock match, but Putski shoots up and hits the POLISH HAMMER for the win. (2:56) With that loss, Akbar leaves the WWWF and returns to Oklahoma. ½*

Final Thoughts: Check out the championship matches at least. The rest is pretty below average from what I’ve seen in the past from these MSG shows. Thumbs in the middle, but Bruno/Hansen is a must-see if you’re into this sort of thing.