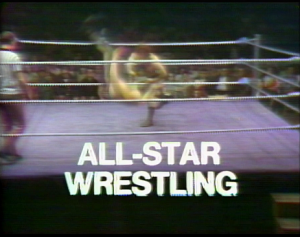 Pop Culture #1s of the Time:
#1 Movie of the Week: Robin and Marian starring Sean Connery & Audrey Hepburn
#1 Song of the Week: December, 1963 (Oh, What a Night) by the Four Seasons
#1 TV Show of 75-76 Season: All in the Family starring Carroll O’Connor

Your host is Vince McMahon and Antonino Rocca. The poor man — I have no clue what Rocca is ever talking about.

This is our first look at the Executioners who will soon dethrone Cerdan and Parisi of the WWWF tag titles – just as Captain Lou predicted. The Executioners are Killer Kowalski and Big John Studd under blue masks and they hail from parts unknown. Seems like an out of place gimmick for this promotion. The WWWF relied heavily on big personalities and representatives from ethnic groups based around the northeast (like your Italians, Irish, Puerto Ricans, African Americans, etc.) over gimmicks like these. It seems more like a southern gimmick done up north. Anyways, it’s time to establish them as scary cheating heels.

Barrett gets cornered on the wrong sides of town and pays for it by being triple-teamed. They seem to work like the Andersons as well by tearing on arms. While Rivera is being brutalized, Pat Barrett tries to keep Albano away. That just allows the Executioners of course to double-team Rivera. They give Rivera a double backdrop and then take turns with the Giant Swing. Kowalski leaps off the top with a stomp and covers Rivera for the three-count. (6:45) Rivera continues to get pummeled after the bell and boy these Executioner guys are RUDE.

Poor old Frankie from Columbus Ohio. Call me crazy, but I don’t think Rodz gets enough credit. He has a great look and he’s a pretty tough dude. When it looked like Rodz had the win, the ref doesn’t count to three and Frankie doesn’t pull his shoulder up off the mat. So yeah, match continues. Frankie makes a couple weak comebacks, but Rodz gives him a couple slams and legdrops Frankie for the win in 6:13.

Vince talks with the WWWF tag champs Louis Cerdan and Tony Parisi. These guys are all about playing handball and apparently Vince loves it, too. Parisi says he has enjoyed wrestling 1-on-1 matches as well lately. Vince brings up the Executioners. Cerdan and Parisi both think they are their ultimate challengers right now – especially with that jerk Captain Lou in their corner.

Blassie causes so much trouble for Sanchez that security has to hurry over and stop someone in the crowd from getting involved. Sanchez makes a HOUSE OF FIRE comeback, but Akbar cuts him off and drops him on the top rope for a DQ. (3:54) Dominic DeNucci comes out to check on Sanchez and he’s ready to fight Akbar and Blassie.

Blassie is sent back to the locker room as soon as he grabs Sullivan. Blackwell use his weight and pounds away on Sullivan in the corner. Sullivan fires back and keeps Blackwell down on his knees. He knocks Blackwell down and covers him, but Blackwell presses him off at two. Blackwell headbutts him in the gut to take back control. He headlocks Sullivan, but again Sullivan punches back and delivers the DOUBLE STOMP for two. Nasty forearm shot puts Sullivan back down. There’s a choke on Sullivan, but Blackwell has until the count of five! Sullivan comes back with more punches. Good grief. Blackwell chokes Sullivan in the ropes and thumbs him in the throat as the bell rings. (10:00) Even though it’s a time limit draw, the ref awards the match to Sullivan, which baffles Vince and you and I. Rocca says you don’t think it be that way, but it do. Yep. ¾*

It’s a BIG SHOWDOWN. Ernie Ladd is warned by a handful of Barney Fifes not to get involved. After Bugsy armdrags away Bobo, Ladd thinks about lunging after Bobo and thinks better of it when the crowd screams. Bugsy takes Bobo from corner to corner beating him up, but Bobo comes back and delivers a pair of COCO BUTTS. (2:32) Before he can make the pin, Ernie Ladd jumps in the ring and attacks Bobo. Next thing we know, Billy White Wolf comes out and saves the day. Tony Parisi and Louis Cerdan help out as well. Since both sides interfered, the ref threw the whole match out. ¼*

Afterwards, Vince McMahon talks with Bobo Brazil about his ongoing feud with Ernie Ladd. Bobo is going to hound Ernie Ladd and he will pay.

That’s all she wrote for the All Star Wrestling episodes from 1976. There’s two MSG shows from August and October from this year that I’ll be recapping soon. The main events will include Bruno Sammartino taking on Stan Hansen INSIDE A STEEL CAGE and a best 3-out-of-5 falls match including Andre the Giant, Chief Jay Strongbow, and Billy White Wolf taking on the Executioners and Bruiser Brody!

Until next time though, so long for now.