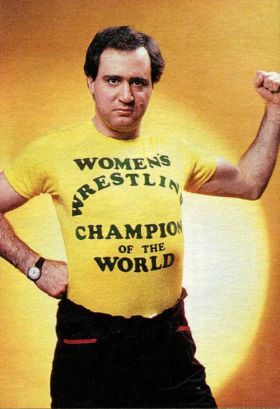 These two are in no hurry to get going. Rodz wears down Rivera with a chinlock and kills more time. He puts the boots to Rivera and maintains control for a while longer. Around eight minutes in, Rivera avoids a flying knee drop and goes to town on the leg. He stays in control of the action until he allows Rodz to go to the apron where he can stall. Back in, Rodz goes to chopping the throat and catches Rivera with a pair of reverse kicks. Rivera catches the third kick and goes DROPKICK CRAZY. He delivers a backdrop for two. Both guys take turns missing splashes. Rivera lands a senton splash and then slams Rodz for another shot at the cannonball splash, but Rodz brings up the knees to block for 1-2-NO! Rodz thinks he’s won and while he’s celebrating, Rivera dropkicks him into the corner. They trade rollups, but neither man can get the three-count. Rivera tries a crossbody out of the corner and both men are knocked out. How about one more double-KO. Rodz moves out of the way of a corner charge and lets Rivera crash and burn. As he falls to the mat, Rodz lays on top of him just as the time-limit expires. (20:00) This was about five minutes of a good match. Too many spots were repeated to feel like we were seeing an even match, but it just got repetitive. ¾*

Howard Finkel introduces the fighters for a WBC Super Bantamweight championship bout for Friday night in MSG between the champion Wilfredo Gomez and the challenger Nicky Perez.

Vince mentions the fallout between Captain Lou Albano and the Valiant family. No Jimmy Valiant either as he’s preparing for Dusty. That should be interesting. Jerry gets tied up in the ropes almost immediately and pounded by Putski. He finds himself in Putski’s BEARHUG, but Johnny nails Putski from behind to break it up. Putski grabs another BEARHUG and Jerry looks to be going out. Meanwhile, Tito is keeping an eye on Johnny. Putski and Jerry fight out into a double-KO. Jerry wanders into a right hand from Santana and goes back into the BEARHUG. Tag to Tito, he grinds on a headlock and keeps Jerry on his side of town. When Jerry escapes, Santana keeps him grounded with a flying headscissors. Eventually, Jerry makes his way over to Johnny for a tag while still in the headscissors. Johnny begs Tito not to wallop him as Santana goes to work with an armbar. Once Johnny breaks free, he sees a backdrop coming and kicks Tito away. He whips Santana into the Valiants corner as he and Jerry choke Tito with the tag rope. To the mat, Jerry grabs a nerve hold and keeps Tito down. There’s a blind tag spot with Putski as Santana gets double-teamed on the wrong side of town. This continues until the Valiants punch each other by mistake. HOT TAG TO PUTSKI! He throws both Valiant boys to the floor as the crowd goes nuts. Back inside, the Valiants are so discombobulated that while they run the ropes with Tito, the Valiants run into one another. The legal man Jerry gets knocked to the floor while Tito surprises Johnny with the CROSSBODY BLOCK to get the three-count to win the tag titles. (13:39) Johnny is already claiming there was a conspiracy against them since Jerry was the legal man, but babyfaces always get their way around here. Since Albano has cut ties with the Valiants and especially now that they have lost the tag team titles, it’s time for him to bring in another pair to get back the gold: THE WILD SAMOANS. They are coming for you, Ivan and Tito. ***¼

There’s a MOOSE sighting in Madison Square Garden. After two long-ish matches, it’s time to calm the crowd down with a beat-em-up. Volkoff jumps Moose at the bell and never lets up. A Hulk Hogan big boot and a running stomp to the chest wins the match for Volkoff in 3:56.

After the bout, Vince McMahon interviews ANDY KAUFMAN at ringside. On the last episode of Saturday Night Live, Kaufman appeared on the show not as a guest host but to challenge the women in the studio audience that if they could beat him in a three-minute wrestling match, he would give them $500.

Bob Backlund comes out to “Everything is Great” by the reggae band Inner Circle. They have been building up Hanson for months on TV – even going as far as to have him “injure” permanent jabroni Frank Williams with a piledriver. Hanson pounds the back and works a bearhug on Backlund. How many times have we seen a bearhug tonight? About 6-7 minutes of this match is Backlund trying to get out of the hold, but he can’t hit the Atomic Drop with an injured back, so the psychology is sound if still boring. Backlund sits on Hanson and pulls back on a chinlock. Hanson has almost zero flexibility at this point. Anyways, another five minutes are killed with the chinlock. Backlund tries something off the middle rope and gets caught in the bearhug again. Hanson wins a staggering slugfest and goes for the Piledriver, but Backlund won’t have anything to do with the move. After Backlund backdrops Hanson away, he hits the ATOMIC DROP that puts Hanson on the apron. Back inside, Backlund runs into a boot and gets knocked down. Hanson misses a flying legdrop (!!) and when he staggers to his feet, Backlund lands another ATOMIC DROP for the three-count. (16:28) A drop in quality after the Patterson series, but that’s to be expected here. ½*

Hussein grabs the house mic and starts yammering on about nothing. He then charges DeNucci, but Dominic is waiting and ready for him as he tears into Hussein like a tornado on a windmill. After he gets rid of Hussein’s attire, DeNucci slows things down with a headlock. You would think they would pick things up a bit since the last match was a bore, but nope. DeNucci avoids a corner charge and goes to town on Hussein’s testicles. Not sure why this isn’t a DQ except that babyfaces always get away with crap like this in the WWF. Hussein has enough and headbutts DeNucci into the gut. DeNucci tries to come back and works on the knee. It all looks terrible. DeNucci sends Hussein into the ropes for the AIRPLANE SPIN. They both tumble over the top rope – DeNucci hits the floor while Hussein falls to the apron and rolls back under the bottom rope to win the match by countout. (6:31) Really? A countout win over DeNucci? I think it’s time to look elsewhere for work, Sheiky. ½*

Vince calls this the second main event of the evening. This will be the end of Valentine’s first major heel run in the WWF – and on his way out, he’s got to do the honors for Bruno. He will return in the latter part of 1981 to once again challenge for Bob Backlund’s WWF title. Sammartino goes for the arm early on as he hammerlocks Valentine and runs him in circles around the ring until he drives Valentine down onto the mat to continue in the hold. Valentine grabs a leg and goes to town on the left leg hoping for the Figure-Four at some point. Bruno fights up to trade blows with Valentine, but he’s limping all around the ring. Valentine catches Bruno with a back elbow that knocks him to the floor. Back in, Valentine stays on top of Bruno and goes for the Figure-Four, but Sammartino punches the arm he was working earlier. He even applies the hammerlock again and drops some knees into the elbow. Bruno stalks him into the corner, but Valentine escapes and a toehold takes Bruno down as Valentine grapevines the legs. He turns Bruno around and nearly gets the pin a few times. Valentine comes off the second rope trying an elbow drop, but Bruno moves and goes to town again on Valentine’s arm. Eventually, Valentine reaches the ropes and gains a breather on the floor. When he’s back in, Bruno goes NUTS on Valentine and once Valentine is knocked to the apron, he sends Valentine into the ringpost to bust him open. Bruno continues to punch around with Valentine until the ref decides Valentine is too bloody (even though he’s still standing) and calls for the bell. (15:10) This seems like a standard Bruno finish to me. Bruno beats his opponent to a bloody pulp and the heel doesn’t actually lose because the ref makes a decision, which keeps them strong. Not my favorite kind of finish as I would have liked to have seen the arm work and leg work play more into how this concluded, but it’s what we got. ***

This match is interesting to me. Seems like a huge clash of styles, but imagine the business they would do in the Mid South Coliseum against each other. Certainly a different type of match than we’ve seen in the match prior to this. Dusty unloads on Jimmy, but then Jimmy comes back and hammers away. Next thing you know, Dusty kicks away a backdrop and hits the BIONIC ELBOW on Valiant for the win. (5:27) Ironically, Valiant gets beat with his own finishing move. ½*

Vince talks with Kal Rudman who goes into crazy promoter mode about the WWF tonight.

After the break, Howard Finkel runs down next month’s MSG card which was not televised:

Brower owns Larry Z in the brawling department as Vince would say. Naturally he wants to keep this as a brawl since that’s where Brower is king. Zbyszko comes back and stomps him in the ropes, but then Brower goes to the eyes and rakes the face. Zbyszko blocks a turnbuckle smash and returns the favor. As Zbyszko is punching away, Brower kicks him in the balls and won’t listen to the ref, so he gets DQ’ed at 3:49. The ref gets shoved away by Brower, but then Zbyszko scares him away to end the contest once and for all. ¾*

HUGE stall job from Patterson to start. I mean, it puts both Larry Zbyszko and Michael Hayes to shame. Kal Rudman joins Vince on commentary for the rest of the match. DiBiase finally has enough and kicks the crap out of Patterson. He goes after the arm for a while. Once he breaks free from an armbar, Patterson misses a corner charge and runs shoulder-first into the ringpost. DiBiase grabs the Abdominal Stretch, but Patterson falls into the ropes to break it up. DiBiase doesn’t let that stop him and reapplies the hold in the center of the ring. Patterson claws DiBiase in the face to get loose. He chokes DiBiase down in the corner, which only pisses him off more. DiBiase hits a nice dropkick, but whiffs on the second one. Patterson goes into his tights for some brass knux. Just as he goes to nail DiBiase, DiBiase hits him back to take the knux off Patterson. Now DiBiase puts on the knux, but gets tripped up in the corner by Patterson for the cheap pin. (7:55) DiBiase would soon return to the NWA territories where he had the chance to become a star. **

Final Thoughts: You can see they were trying to pad the card with lots of stars. Backlund doesn’t even discuss his match with Swede in his book, which shows you the interest there. Check out the tag titles match as that was fun. Overall, this was an above average MSG card here. Thumbs in the middle for MSG 10/22/79 if you can find a copy.