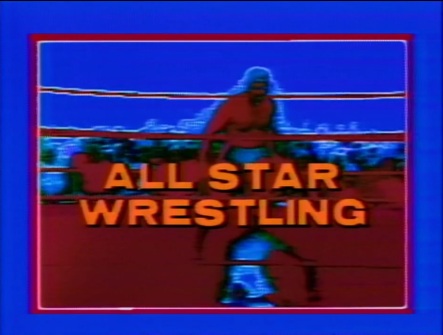 While being touted as a suplex specialist before the bell by Vince and Bruno, Hussein spends much of the match choking Moose and follows up with a Bossman straddle. He shows off with a NICE standing dropkick. Yes, a dropkick from the Iron Sheik. Moose escapes a chinlock, but Hussein rides him down to the mat. Hussein then kicks Monroe with the EVIL LOADED ARABIAN BOOT and delivers a running knee drop to Moose for the win in 4:53.

This is *your* feature bout of the evening. After Jimmy gets done stalling, Johnny hooks the leg from the floor to trip up DeNucci. Jimmy dumps out DeNucci so that Johnny can run him into the steps. The Valiants even double-team DeNucci right in front of the ref, but he doesn’t call for the bell. Back in, the cheating continues. DeNucci comes out of a nerve hold only for Jimmy to go low on him and send DeNucci into the buckle. Johnny knocks DeNucci for a loop behind the ref’s back. Vince – “THIS IS A HANDICAP MATCH!” Back to the nerve hold. DeNucci makes a comeback and forces Valiant to the floor for a brawl. DeNucci has to fight off the Valiants using a water pitcher and both men are DQ’ed. (7:54) Afterwards, Johnny acts like he’s going to give DeNucci a piece of him and then slinks back out to the floor. *

After the break, Vince interviews Johnny and Jimmy Valiant at ringside. They talk about giving Captain Lou Albano his walking papers. They put him down for being a fat slob and a crazy person. This gets cheers from the crowd. Vince wonders why they split up. Johnny says it’s because Albano kept interfering in their matches and causing the Valiants lose. Vince proposes one of the Valiants face Captain Lou and they seem all for it.

Crowd is chanting “Crazy Lou” at the start of the match. Hanson hammerlocks the arm down on the mat and puts the boots to the elbow. BRUTAL. While he’s breaking Ron Lee’s arm, Hanson has a smile on his face. Vince makes a weird comment saying Swede isn’t such a bad looking guy. Bruno doesn’t know what to say to that. Hanson continues his sadist-style offense and rips at the arm in a keylock. He finally gets Lee to submit as he lifts Lee in the air while he’s still got the keylock applied. (6:57) This was total domination from bell to bell.

DiBiase tries to get the quick win over Coleman with a series of well-timed rollups. He works on a hammerlock and stays on the arm. Coleman tries to get DiBiase to make a mistake by punching on him, but DiBiase goes right back to a hammerlock. Coleman catches DiBiase with an elbow, but runs right into a hiptoss. They lock up again and Coleman backs DiBiase into the corner for a series of blows and cheapshots. He takes DiBiase from corner to corner, but DiBiase gets fired up and unloads on Coleman. He whips Coleman hard in the corner, follows up with a snapmare, and a jumping knee drop gets two. Coleman punches back which gets DiBiase FURIOUS. He starts to no-sell the punches Coleman throws and drills him with an elbow. Here comes the ABDOMINAL STRETCH to give DiBiase the win. (8:05) Coleman put up a fight, but there’s not much he could do to beat a guy like DiBiase. *

A Bobby Duncum vs. Billy Berger squash match gets cut from the episode on WWE Network. Apparently, Arnold Skaaland replaced Bruno on commentary and Bob Backlund attempted to make a save and was beaten down by Duncum. So it’s kind of a shame we didn’t get to see that match. Anywho, that’s going to do it for this week. Until next time, so long for now.