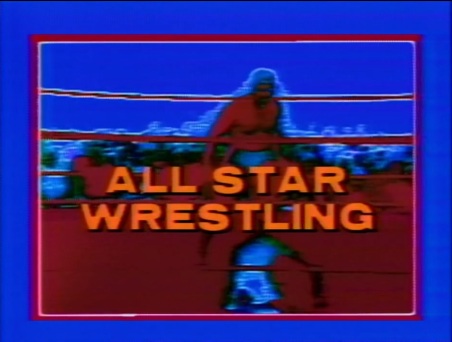 Rodz controls early with a front headlock. Zbyszko EXPLODES out and grabs a chinlock down on the mat. Lots of talking going on here. Rodz pulls the hair to escape and tries to go for Larry’s leg. Up to their feet, Rodz goes to pounding on Zbyszko. Vince gives Rodz crap for not taking Zbyszko seriously. Larry Z comes back with a slam and knees the back. He applies the Abdominal Stretch, but Rodz counters with a hiptoss. Rodz sees a backdrop coming and kicks him away. He cradles Zbyszko for a few nearfalls. Zbyszko surprises Rodz with a sunset flip for 1-2-NO! This time Rodz telegraphs a backdrop and Larry kicks him away. Rodz starts slamming Zbyszko and knee drops him for two. A headbutt from Rodz knocks himself silly. Zbyszko whips Rodz into the ropes for a backdrop and telegraphs the move on purpose so that Rodz can kick the air. As he falls to the mat, Larry Z jumps on top of Rodz for the win. (7:19) I like these weekly wrestling matches for Zbyszko to put him over as a technical wizard who can hang with a legendary figure. Although I enjoyed the Johnny Rivera match from last week better. *½

Vince McMahon interviews Bobby Duncum after his match with Ben Ortiz. The match is cut from this episode, but I’m assuming how Vince is putting over the Running Bulldog that he won the match via the Running Bulldog. Talk turns to Bruno Sammartino. Duncum calls Bruno a second rate Howard Cosell now that he’s in the area. He does feel Bruno is a “living legend”, but Duncum is the only man in the world better than him. Captain Lou Albano finally gets some mic time and he’s insulted it’s taken Vince almost seven minutes to pay him any attention. He just talks up Duncum and walks away leaving Duncum to rap some more about hating yankees.

It’s the “Duke of Dorchester” by way of Boston Mass, PETE DOHERTY. He’s already showing some charisma and standing out amongst the jabronis. Doherty starts off against Putski. He grabs Putski in a headlock and starts punching, but that’s Putski’s thing. He turns the tables on Doherty returning the favor and puts him out on the floor. Awesome. If I recall correctly, this is the earliest we’ve seen of Doherty. He does a great job not just being a punching bag for the tag champs. Santana works the arm of Estrada and tags in Putski who tries to snap Estrada’s wrist. Doherty interferes and nails Putski, but then Santana smashes Doherty’s face on the buckle sending him running to the floor. Back over to Santana, he stays on the arm of Estrada. Once Estrada breaks away from an armbar, Santana goes DROPKICK CRAZY. Tag to Doherty, Santana nearly whips Doherty over the top rope only to be caught and pushed back inside by Putski. Doherty gets a brief comeback, but misses a corner charge. Santana slams Doherty and returns to the armbar. In comes Putski, he stays on the arm but Doherty reaches the ropes for a break. Tag to Estrada, Putski gets tired of being punched on and slams Estrada down. He grabs a chinlock with his back to Doherty. The tag champs pull a switcheroo on the chinlock behind the ref’s back. Doesn’t really matter to me since they are in control anyways, but it’s what the babyfaces do in the WWF: cute cheating. Santana gets caught on the wrong side of town, but the LATIN TEMPER gets going and he breaks loose. He runs Estrada into Putski for a shoulder butt that gets a two-count. Tag to Putski, he and Doherty exchange blows and Putski wins that exchange. He punches both Doherty and Estrada to the floor. Back to Santana, he lands another dropkick on Doherty. He tags Putski and whips Doherty into the ropes for the POLISH HAMMER for the win. (8:01) Pretty entertaining squash match as Doherty looked awesome. Not sure if this went a little longer than it should have with new tag champions or not, but it’s a fun match. Doherty and Estrada are not exactly complete ham-and-eggers around here. **

After the replay, Bruno Sammartino interviews the tag champs. Tito puts over Putski for making his big moves more effective against taller guys like Swede Hanson. Putski says he and Santana are learning from mistakes and getting better and better with each match.

They interrupt the replay as DeNucci shows back up with a chair to scare the Samoans and Albano out of the ring.

Wizard takes his time helping Patera off with his jumpsuit. As the Grand Wizard drops to his knees, the crowd whistles at them inferring there’s some hanky panky going on. Patera claims to be the world’s strongest man and even Bruno has to agree with him. Patera stays on the neck and makes poor Frankie submit to the SWINGING FULL NELSON at 3:04.

That does it for this week’s All Star Wrestling program, but let’s see what’s happening on the A-show this week.

AND FOR A SPECIAL BONUS MATCH~!

You can catch this match over on the WWE Network as well. Search for “Hulk Hogan’s Unreleased Collector’s Series” and it’s the first match on the program. This is Hulk’s WWF TV debut. As everyone knows, Hulk was broke into the business down in the Florida territory by Hiro Matsuda in 1977. Since Matsuda was too much of a bully, Hulk decided to leave the biz after only a few months to pursue other ventures. Once he and Ed Leslie (or Brutus Beefcake) decided to get back into the business, Hulk called Superstar Billy Graham who was able to get Hogan booked in Southeastern Championship Wrestling which led to Hogan then being booked in other surrounding territories including receiving national exposure on WTBS. Being a big man’s territory, it only made perfect sense when Terry Funk introduced Hogan to Vince J. McMahon. While he had been referred to as “The Hulk” in Memphis, McMahon wanted to give Hulk an Irish last name and calls him Hulk Hogan, brother.  So here he is. Hulk Hogan has finally made the big time.

If you’ve never seen Hogan during this time period, you might notice his body hair is styled to point to his dick. Vince and Bruno both marvel over Hulk. He slams Valdez around and delivers one of the better legdrops I’ve seen from him. There’s a suplex to do further damage to the back before Hulk puts away Valdez with a Canadian backbreaker in 2:51.

Vince McMahon talks to Freddie Blassie and Hulk Hogan after the bell. Blassie runs down Hulk’s stats before Hogan tells Vince he wants better competition around here. He will squeeze everybody around here until their ribs BURST. Hulk feels there’s not a man alive that can beat him – and that goes for Vince McMahon as well. The amount of charisma dripping off this man is just unreal off the charts. There’s undoubtedly nobody quite like him in the WWF since we last saw Superstar Billy Graham. Definitely worth a look.