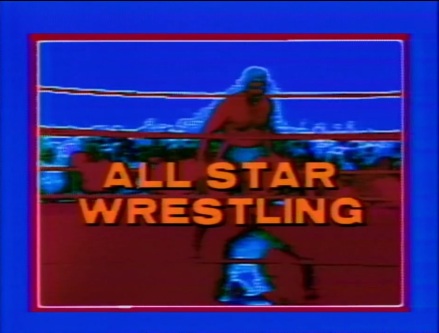 Your hosts are Vince McMahon and Pat Patterson. May Pat Rest in Peace.

Not sure why this is being shown on All Star Wrestling other than to give people a chance to see the WWF champion. This is four months into Backlund’s big run and one of his first title matches in MSG after his return bouts with Superstar Billy Graham. As for Arion, this would prove to be his last shot at the WWWF title in MSG after getting several shots against Bruno Sammartino in 1975 for their famous feud. As the match gets started, they cut to the crowd for a weird edit showing Backlund working over Arion’s leg doing the rowboat thing for several minutes. Eventually, Arion kicks him off and puts the boots to Backlund. He slams him back inside the ring from the apron and lands an atomic drop (Backlund’s jumping bump is hilarious) and Arion gets two. He tries a slam, but Backlund slips out and delivers his own ATOMIC DROP for the three-count to retain the WWWF title. (6:45 shown) This goes about twenty minutes in full. I don’t care what anybody says – BACKLUND WAS OVER IN MADISON SQUARE GARDEN. The crowd reaction and the “aww shucks” way Backlund reacts could be why they decided to show parts of this match to us.

This is the last we will see of the Maravilla experiment in the WWF as he returns to wrestle in Puerto Rico. Shaw gets beaten down and thrown around to start. In comes Maravilla, Rex isn’t concerned. He headbutts Maravilla away and tags in King for more headbutts. These Moondogs do not give a shit about Maravilla’s punches. He gives up and tags Shaw, but the Moondogs won’t sell for him either. Rex lands the Jimmy Valiant finish and keeps going ripping at Shaw’s face. Albano talks over McMahon and Patterson about the Moondogs. When Vince asks him how the Moondogs compare to the Wild Samoans, Albano won’t answer him. Meanwhile, Rex delivers a backbreaker to set up Shaw for the running splash by King for the win. A total SQUASH if you will in 6:25.

After the bell, Pat Patterson interviews Captain Lou and the Moondogs. Pat gets real with the Moondogs and yells at them for messing with him and his suit. He then questions Albano where he found the Moondogs. Albano says that’s none of our business, but the fact remains they are here. He says they are the greatest tag team of all-time, which is the claim he makes with every team he manages. Albano reminds us he’s managed NINE WWF tag team champions. When Pat reminds Albano the new tag team champions are Rick Martel and Tony Garea, Albano goes NUTS and starts running around ringside like a maniac. Albano says he was tricked into a one-fall title match but promises that won’t happen again. He’s coming back after Garea and Martel with his Moondogs. Albano shows a cut on his arm that was apparently from something the Moondogs have done. Patterson cuts the interview short because this is clearly going nowhere.

The people are going CRAZY over Garea and Martel being at ringside. Martel wears a three piece suit to show how classy and professional he is. Garea plays around with an armbar to start. They flub a hiptoss spot and Estrada tries to hold on with a headlock. Estrada punishes Garea with a slam and an elbow drop. He grabs a reverse chinlock and then hammers on Garea in the corner. He whips Garea from corner to corner and continues to unload. Garea gets caught with a back elbow as he comes off the ropes. Estrada applies a nerve hold. As Garea stands up, Estrada rakes the eyes several times to maintain control. Next thing you know, Estrada telegraphs a backdrop and Garea delivers a windmill punch. Garea whips him into the corner and delivers a backdrop of his own for two. Estrada hits a random scoop slam for two. Garea then blocks another one and inside cradles Estrada for the win. (7:42) Pretty flat match. There’s just no fire with Garea. *

Afterwards, Pat Patterson and Tony Garea gush over how much they like Rick Martel. Pat congratulates Garea and Martel over their recent success as becoming WWF tag team champions.

Khan screams and delivers chops and kicks to Pole. Vince considers that maybe Killer Khan is the number one contender to the WWF title. Khan will be Backlund’s challenger inside Madison Square Garden on December 29 where Khan is of course unsuccessful in capturing the gold. He finishes off Pole with the Jumping Knee Drop in 3:21.

Atlas splits his time between the WWF and GCW and has to be down in Georgia defending his NWA Georgia heavyweight title instead of being at this WWF TV taping. Coleman keeps charging at Tony until he takes a big slam. That slows him down. Atlas grinds on a headlock for a while. After Coleman escapes and cheapshots Atlas, Tony isn’t impressed and whips him hard from corner to corner. Back to the headlock. Again, Coleman cheats to get out of the hold. Atlas gets MAD and delivers a backdrop. He then press slams Coleman (without much help at all from Coleman!) and gives him an elbow drop for the win in 3:28.