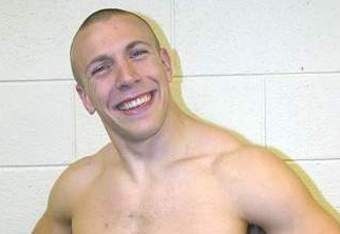 In the locker room, Christopher Daniels says he considers Ring of Honor as just another independent promotion. He says he should know – he’s been in every independent promotion in America. He also disses the code of honor and tells us he’s here to pin shoulders to the mat, not shake hands. Tonight, Christopher Daniels will prove to Bryan Danielson and Low-Ki that he is the best independent wrestler in the USA today. The only thing you can do about it is say your prayers.

Gotta love all the faggy dance music used here in the promos. That’s SOOO Rob Feinstein. Then everything changes to some crappy hardcore music. Riiiight.

We see Da Hit Squad again ready to hype the fans standing outside the Murphy Rec Center on Shunk Street – a couple blocks away from the ECW Arena. Yeah, the ROH fans are SO HYPE now.

Just so there’s no mistaking, here is the Code of Honor. I feel like Gary Michael Capetta should be reading this like he does the Wargames rules in WCW.

Your hosts are Donnie B and Steve Corino.
END_OF_DOCUMENT_TOKEN_TO_BE_REPLACED

If the name didn’t give it away, this is the first-ever Ring of Honor show. The original idea was that ROH would take the best of the American independent wrestling scene and put them all onto a mega huge super show once a month. But it’s not going to be like all the other sportz entertainment bullcrap promotions that the mainstream companies have jammed down your throats for the past five years. ROH also refuses to give our fans the outdated insulting gimmicks that we saw from a decade ago. In fact, the wrestlers here must abide by a code of honor in order to remain in this promotion. What could go wrong, AMIRITE?

Before anything gets started, we see Da Hit Squad hyping ROH to the tour buses coming in from NYC and Boston.

Your hosts are Donnie B and Steve Corino.
END_OF_DOCUMENT_TOKEN_TO_BE_REPLACED