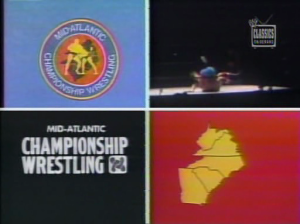 The US champ Sgt. Slaughter comes out and makes a $1000 challenge to anybody who can break his Cobra Clutch submission hold. He then exercises his authority by making Pvt. Nelson do a bunch of push ups. Let’s go to the ring!

Sonny Fargo is *your* referee for the duration of the program.

Steamboat delivers his usual to Fulton with fancy headlock takedowns and such. Fulton takes over with a chinlock. He fights out, but the crossbody block misses. That gets two. Back to the chinlock, Steamboat chops out and starts running Fulton’s shoulder into the corner to set up the DOUBLE CHICKEN WING SUBMISSION for the win. (7:19) Nice extended squash to showcase Steamboat. *½

So according to the rules, the belt is only on the line during the first 15 minutes of the match. Huh. Koloff absolutely OWNS this guy on the mat with a front headlock. Some kid at ringside makes some pretty hilarious comments. Flying Knee Drop ends the match and puts this kid out of his misery at 5:32.

Dang, they are already advertising cards in Roanoke VA on February 20. You’ll see stars such as Austin Idol, NINJA, Roddy Piper, Ivan Koloff, Porkchop Cash, Jay Youngblood, Ray Stevens, and Jimmy Valiant. On February 16 in Marion VA, you’ll see Lord Alfred Hayes and Ray Stevens teams up with Johnny Weaver to take on Gene Anderson and the NINJA~! Who is Ninja? Roddy Piper cuts an AWESOME promo on Ricky Steamboat. Everybody he has ever fought in his entire life FEARS him – except Steamboat. What’s wrong with you? Did your parents build you a swing facing the wall? Steamboat’s crying about a title shot, but buddy you win some and you lose some. Well that was great.

Can anybody really trust Ray Stevens? They show a squash match from a recent episode of Wide World Wrestling between Ricky Steamboat and Mike Prater where Ray Stevens saves Steamboat from Ole Anderson and Roddy Piper. See there? He can be trusted.

Prater attacks before Stevens even gets his ring jacket off. Not cool. PILEDRIVER. It’s all over in 37 seconds.

Afterwards, we see that Ray Stevens still has Gene Anderson’s tag belt. He tells the world that while he may have done some dastardly things in the past, but one thing’s for sure is that he was honest about it. His word is his bond. He goes on to blame Ole for Gene’s twitch by sacrificing him to win a match. Come and get the belt Ole – that is if you’re man enough.

Oh no, not Jimmy Valiant. Running elbow drop gets the win at 1:58.

An announcer guy mentions the Virginia cards in February again. Johnny Weaver threatens to break rules to his tag match with Ray Stevens against Gene and the Ninja. Ricky Steamboat gives his response to Roddy Piper’s words earlier. He does his best Roddy impression. It’s not so good, but still pretty funny to watch. He wants the Mid Atlantic belt, RODDY.

Slaughter leaves the ring to bark at Caudle and Crockett. Meanwhile, Nelson is getting his butt handed to him by the jobbers. Whoops. Slaughter heads to the ring and tags in to take care of Anthony for a while. Hamilton comes in and kicks Slaughter away before taking him over with an armdrag into an armbar. Dropkick to Slaughter, but it only gets one. Jay Youngblood heads over to the announce desk to challenge Slaughter’s Cobra Clutch for the thousand bucks afterwards. The match goes back and forth with Nelson making the mistakes. Slaughter has to come in and put Anthony away with the COBRA CLUTCH to end this thing at 6:50.

IT’S COBRA CLUTCH CHALLENGE TIME! Slaughter says that Youngblood has already had his chance and blew it. Maybe somebody else wants to give him a try? Perhaps a jobber or two? Youngblood says he escaped Nelson’s Cobra Clutch and he can do the same with Slaughter. NWA representative Sandy Scott comes out to tell Slaughter that he HAS to get in the ring and give him a shot at his $1000. Well that seems highly unfair. He should be able to pick who he wants to win his $1000. If he doesn’t give Youngblood his chance, then Sandy Scott will strip him of the US title? WHAT. Slaughter continues to stall until we run out of TV time. Aww, that’s just too bad. Slaughter says he’ll give him a chance at the top of the show next week. You can say one thing – the man is fair.

And that does it for now. I’m missing the next three weeks of shows, but I should have everything else through the end of February 1982. SWEET!