No messing around. They go straight to a match. Shamrock shows us his fancy transitions to armbars, so HHH thumbs him in the eyes and stomps him down in the corner. Now that’s RASSLIN. High Knee and the Knee Drop gets two. Helmsley dumps Shamrock out to Chyna for a ride into the steps. Back in, Mankind walks down the ramp to distract Hunter. He turns back around into a Belly to Belly Suplex and the ANKLELOCK gets the win. (4:42) Common sense booking here. Shamrock looks strong going into the PPV main event beating the KOTR and the HHH-Mankind feud heats up a little leading up to their PPV match. ¾*

Just as he was getting a main event push, Ahmed Johnson tore some ligaments in his right knee and will be out of action – AGAIN. This is the end of him ever being a heel threat.

In one of his earliest appearances, Michael Cole interviews the Legion of Doom for one of their standard promos.

Somewhere Sunny is fondling a casket filled with money. It’s part of the WWF SummerSlam Million Dollar Challenge. Who says they only started giving away money to watch the show in the summer of 2008?

Big brawl to start ending with Animal catching Faarooq coming off the second rope for a powerslam. The Godwinns watch on from the ramp. Tag to Hawk, he handles D’Lo just fine. Reverse neckbreaker gets two. It breaks down as Faarooq gets ran into the steps. DOOMSDAY DEVICE to D’Lo! Then Animal and Kama trade blows which grabs the ref’s attention. Meanwhile, Henry Godwinn blasts Hawk with the slop bucket and Faarooq jumps on top of Hawk for the 1-2-3. (3:02) Clearly not wanting to job, Hawk kicks out at three. So now we have our first finalists. ½*

Vince meets with the Nation of Domination in the ring for an interview. Faarooq is pissed that nobody else in the NOD gets to replace Ahmed in the WWF title match at the Canadian Stampede. It’s because they are black dudes. Instead, Vader is getting the title shot. Moving on. Vince brings up Crush, which brings OUT Savio Vega, who debuts Los Boricuas. They are made up of WWC stars Miguel Perez, Jose Estrada Jr., and Jesus Castillo. A big fight erupts, but then an even BIGGER fight occurs once the Disciples of Apocalypse who we saw debut last week enters the ring. GANG RULZ!

To hype up WWF Raw Magazine, there’s an article (with pictures!) outing some sort of relationship between Brian Pillman and Sunny. What’s that about? Buy the mag to find out.

Elsewhere, Undertaker is freaking out.

Putski debuted on Raw about six weeks ago against Leif Cassidy to little fanfare. Here’s take #2! Putski delivers some power moves to start, but Christopher takes over with the Stroke. Vince and JR keep pestering Lawler about whether or not he’s the father of Christopher. Great Sasuke’s appearance on the PPV gets mentioned. Missile dropkick to the back of the head gets two. Putski counters a headscissors with a sitout powerbomb. Lots of clotheslines sets up the Flying Splash. Lawler feels the need to distract Putski, which leads to heel miscommunication. It looks like Lawler has been vanquished, but he trips up Putski from the floor and Christopher cradles him for the 1-2-3. (3:38) Proving most Polish jokes true, Putski attacks Christopher after the match forgetting Lawler is still around. Lawler assists in the SPIKE PILEDRIVER to leave Putski lying. Not a bad match. *½

Exclusive ECW footage of Steve Austin in the “‘Cause Stone Cold Said So’ video of Austin imitating Hulk Hogan.

Backstage, Undertaker tells his ‘creatures of the night’ to let him tell his side of the story before they make a decision on how to judge him after Paul Bearer reveals this secret to the world.

Still wearing the ‘Pick Me Steve’ sign, Mankind delivers an apology gift to JR for giving him the Mandible Claw in their interview. It’s a mannequin hand with a Mankind glove. Being the deranged guy who got fired from color commentary on Shotgun Saturday Night for striking a ringside fan, Pillman takes the hand and jabs Mankind in the eye. Lawler says he’s acting this way because JR got him fired. Whoa, HUGE RF Video sign there. Write that number down, folks! Back in, Mankind comes back and hits the running knee in the corner. Steve Austin appears on the split-screen and says Mankind is smart for picking the best wrestler in the world today as a tag partner, but Austin thinks he sucks so it doesn’t matter. No matter who his partner is, nobody is going to take away his tag team belt. Back to the ring, HHH and Chyna come out of the tunnel to get a closer look at this match. Commercials! When we come back, they fight to the floor where Pillman decks Mankind with the ring bell and LAUGHS about it. I love it. Pillman does more damage to the ear, which causes Mankind to trip up Pillman and post his bad knee! Mankind grabs the MANDIBLE CLAW, but has to let go just as HHH and Chyna hit the ring where Hunter then eats the Claw. From the floor, Pillman takes his boot off and nails Mankind to get him to stop. While Chyna has the ref, Hunter and Pillman have some miscommunication problems as Mankind ducks and Pillman gets clobbered with a chair. Mankind chases HHH and Chyna away as Pillman heads back inside to narrowly win via countout. (6:03 shown) Another good way to get the weaker things over going into the PPV. *½

Vince McMahon brings out Paul Bearer. A very good move to put this at the top of the hour. Some ‘creature of the night’ jumps the rail and pulls Bearer down onto the floor. Security escorts her out of there. Bearer tells the story of how Undertaker set his house on fire and killed his own parents. Kane was just a ‘sweet innocent kid’ who wanted to be just the Undertaker. Nevertheless, Paul Bearer calls Undertaker a murderer. Thunder begins to roll and the lights begin to dim throughout the arena, but nobody comes out. Oh, but he is surely coming.

On a lighter note, now Sable is giving that money-filled casket some ‘Price is Right’ love. Marc Mero isn’t too happy about it.

Early on, the Headbangers double-team Owen with a flapjack. Thrasher gets stuck on the wrong side of town though. Bret Hart joins us via telephone from Calgary. Nothing new is really said here. Hourglass Suplex by DBS. Thrasher continues to get thrashed. Finally, the hot tag to Mosh comes. Bulldog trips up the STAGE DIVE finisher and Owen jackknife rolls up Mosh for the three-count. (4:08) Next thing we know, JIM CORNETTE returns and brings the Headhunters with him. I believe they are called the Arabian Butchers here. Anyways, I’m assuming this is revenge for Owen and Davey Boy getting rid of Cornette some months ago. It doesn’t really make any sense as Owen and Bulldog leave and the Headbangers end up taking moonsaults and elbow drops from the top from these behemoths. So it’s the Hart Foundation v. the NOD to find out who meets Austin and his partner. Yippee! *

Time for the Undertaker to give us his side of the story. The firefighters held him back even though his parents and Kane were inside as the funeral home burned to the ground. What terrible firefighters! He wasn’t at the funeral, but that was because Paul Bearer got him in the middle of the night to go see his dead family at another funeral home. Anyways, that experience is what made him into the Undertaker. It’s the spirit of the dead that gives him his strength and Taker feels the spirits of his family is what will strike Paul Bearer down.

JR – “Paul Bearer can burn in hell for what he has done.” Rockabilly tries to KABONG Vader to start, but he NO-SELLS and runs Billy down. In literally no time, here comes the Undertaker for the DQ in about 20 seconds. He takes care of Vader and threatens Paul Bearer to tell the truth. Paul says that Kane told him what to say and that he is alive. Vader saves Bearer from more punches and takes Paul out of here.

The rest of the Hart Foundation (minus Bret) are watching on from backstage. Lots of headlocks to start. Austin fights back with a Lou Thesz press. He can’t get the Sharpshooter, so he settles for an ab stretch and grabs the ropes for leverage. To the floor, Neidhart gets slammed on the rampway. Commercials! When we return, backstage Bret Hart has tricked us all and showed up in Des Moines! He is shown attacking Ken Shamrock who was just watching the match on the monitor. In the ring, the limited Neidhart keeps Austin grounded until he rallies back starting with a jawbreaker out of a chinlock. As he stomps a mudhole in Neidhart and walks it dry, Bret Hart runs in and attacks Austin for the DQ. (8:24 shown) Afterwards, Bret locks in the ringpost figure-four on his archrival. Out comes Mankind to show his necessity and loyalty as he breaks up the hold by giving Bret the MANDIBLE CLAW. The rest of the Hart Foundation head down to help Bret as the show ends. ¾* 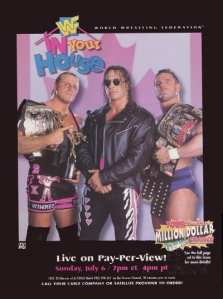 WWF In Your House presents Canadian Stampede
LIVE on PPV – July 6 from Calgary, Alberta, Canada
Here is the card as it looks at the end of this show: