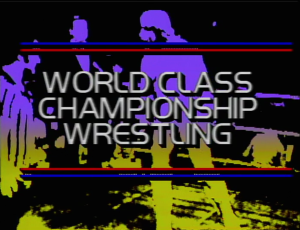 Instead of going into the fetal position when he’s in trouble, Checkmate heads out to seek solace with Hussein. They do that over and over again with standard holds for the first five minutes or so. Checkmate gains the advantage by twisting on the leg. David kicks off a spinning toe hold and gets ready to put a hurting on Checkmate in the corner, but Checkmate slides out and posts the knee. It doesn’t seem to bother David too much because he immediately comes back with the High Knee. He then catches Checkmate with a Sleeperhold and puts him to sleep for the win. (8:45) Hussein and Checkmate complain about there being a choke after the bell. **

Still trying to get straight answers from the Freebirds, Bill Mercer meets them for lunch at some cheap Texas drive-in. Terry Gordy can’t wait to take the American heavyweight title from Kevin Von Erich so he can become one step closer to the NWA world title. After tonight, the Freebirds will have most of the titles in World Class. Mercer wonders if Buddy Roberts is embarrassed knowing that David Von Erich won the NWA world six man tag titles for him, which we all know right now is the top prize in World Class. Once that cat is out of the bag, Michael Hayes starts up their rather large van and drives off, leaving Bill Mercer with the bill. HA.

Mercer makes it clear that Hussein brought Yatsu into WCCW because he’s the only one who has beaten the Great Kabuki, who left him for “The Man”. Adias brings Yatsu down to the mat with armdrags and such. Once he’s on the move, Yatsu catches him for an awesome belly to belly suplex. Yatsu controls the action, but Adias fires back on him every now and then. Eventually, Yatsu dumps out Adias so that Hussein can call him a coward and whatnot. Back inside, Yatsu applies a front headlock. Adias comes back on Yatsu with a dropkick and a swinging neckbreaker for two. As Adias comes off the ropes, Yatsu catches him for a powerslam and applies the COBRA CLUTCH and scores a pinfall. (7:00) Yatsu found success as an amateur over in Japan, and uses that to his advantage in the way he snaps off those slams and suplexes. Pretty sweet stuff. *½

After the break, Bill Mercer meets with Kevin Von Erich. Tonight, Kevin isn’t worried about his American heavyweight title, he’s just here to kick Gordy’s fanny. Yes, he said fanny. Kevin just wants to fight it out like dogs with Gordy, and may the best man win. When Mercer asks about interference from Hayes or Roberts, Kevin knows he’s got his brother David watching his back. Kevin says what he’s REALLY hoping for down the line is a six-man tag match with these Freebird goons.

Gordy protests David Von Erich being at ringside, but it does no good. They go from corner to corner to start as Gordy gets flipped out to the floor. Von Erich dropkicks back to the floor, but then headscissors him back inside, only for Gordy to bail out again. Back inside, Kevin slows the action down with a headlock, but Gordy shoves him off and catches Kevin with a slam. Kevin returns the favor and Gordy again rolls out to the floor. Back in again, Von Erich wears Gordy down with a headlock and gets his tights pulled like crazy. Luckily he’s wearing some extra protection. Gordy fights up, but then gets whipped into the corner for the Ray Stevens bump out to the floor. Man, Gordy can do ANYTHING. Back inside, Von Erich stays with the headlock. Eventually, Gordy escapes and hotshots Kevin. Stalling suplex gets two. Gordy grabs a chinlock and keeps Von Erich at bay. Even though Gordy has the title in his grasp at this moment, Michael Hayes and Buddy Roberts appear at ringside to cheer on their Freebird brother. They’re wearing a SWANK ’83-84 Fabulous Freebirds Fantasia Tour jacket. Once Kevin fights out of the chinlock, he grabs the CLAWHOLD on Gordy. Buddy Roberts argues with the ref, but then Kevin takes care of Buddy by crashing Gordy into him. While the ref is still busy directing traffic elsewhere, Hayes trips up Kevin when he tries a slam on Gordy, causing Gordy to come crashing down on top of Kevin for the 1-2-3. (14:40) Ladies and gents, we have a *new* NWA American heavyweight champion. As if the Freebirds haven’t done enough to the Von Erichs already, they take away one more championship from them. This was really something good. ***¼

Afterwards, Bill Mercer meets with the gloating Fabulous Freebirds. Roberts and Hayes hold up the Georgia state flag behind Gordy and Mercer. Gordy says it feels great be alive in Texas! The Freebirds have all the gold and they aren’t going to stop here, jack.

NEXT WEEK: Terry Gordy takes on the NWA world champ Ric Flair! Too bad I don’t have the footage.