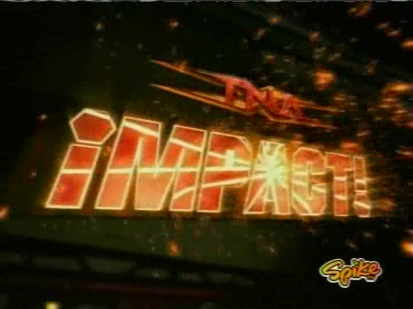 This is the first two-hour primetime (baby!) special on Spike TV for TNA. Today, it’s commonplace, but not back then when iMPACT! was only one hour a week.

AWESOME video package to start things. They show some cool moves from the past, some familiar faces that wrestling fans may have missed, and an overall feeling of testosterone-filled intensity. I’m loving it already. Even with the Don West voiceovers!

Tenay and DW go on and on about the dive Jeff Hardy did off the top of the Impact Zone set through a table onto Abyss. Looking back, Lance Hoyt feels so out of place on this team. Two complete whackadoos and HOYT! HOYT! HOYT! He was over in Orlando, but nobody really remembers him now. Total JTTS match as the Diamonds get a little heat on Sabu. Not sure if that’s much of an accomplishment when the man is covered in bandages. They let HOYT clean house, but Hardy gets the win over Skipper with the SWANTON BOMB. (2:57) After the bell, Abyss comes out and gives Sabu the BLACK HOLE SLAM because that’s just how it goes in TNA. He will face Sabu at Genesis on November 13! ¾*

In the back, Shane Douglas interviews Jeff Jarrett. He faces Rhino tonight for the NWA world title! He spouts off a plethora of hyperboles while promising to make wrestling history tonight. Yeah, that’s right. A plethora of hyperboles. You heard me. Monty Brown shows up and says he wants the winner. I like him in the ring, but I hate this guy on the mic. He calls himself “Alpha Exlax” because he’s going to through his opponent tonight and Jarrett as well (I think). Good grief. POOOUNCE-ah, period. Even though I’m not crazy about him, I do think they dropped the ball with him once TNA got distracted with the ex-WWE guys. Not sure he should have been a long-term champion, but a champion nevertheless that a heel could have got the better of because he’s so “animalistic” and not very bright. Just my two cents.

Tenay puts over Gamble as a former American Gladiator turned wrestler. The crowd wants MULTIPLE POUNCES. Brown shows him some mercy after three of them for the win. (2:19) Yep, that’s how you book Monty Brown. ½*

Short video to put over Rhino as an ironman who went through so much at Bound for Glory to become the NWA world champion. Essentially, Kevin Nash’s loss was everyone else’s gain. Mike Tenay speaks to give this credibility. He’s almost like the Yoda of TNA, but that would be an insult to Yoda.

The indy fan’s splooge match at the time. GENERATION NEXT EXPLODES to start as Aries and Shelley trade headlocks, headscissors, and dropkicks. Nice bit as Shelley sells the pop-up dropkick out of the headscissors by checking to make sure he still has his teeth intact. Sonjay tags in and does his water sprinkler nonsense, which I never understood why you want to do the water sprinkler dance all the time. Tag to Joe, he kicks the crap out of Sonjay and delivers a bunch of running knees in the corner. The man had such ring presence back then. Once Sonjay is down, Daniels tags Joe when he’s not looking, which of course means he will foul it up and cause a hot tag to AJ. When AJ dominates, Daniels stumbles back into his corner and gets tagged out by Joe. He sees the leapfrog and dropkick sequence coming and steps out of the way, but AJ lands on his feet and drop toeholds Joe for the Muta Lock. That triggers a TRIO OF SUBMISSIONS in the ring. TNA! TNA! TNA! Aries gets a shot at Joe and hits the IED. Daniels and Shelley think they will make a difference, but Aries sends them to the floor for the Heat Seeking Missile. When he tries to get back in the ring, Joe boots him off the apron into the guardrail. Geez almighty. Back inside, Joe delivers the snapmare-chop-kick-knee drop combo. Aries breaks loose from a chinlock, but runs right into a SNAP powerslam. Daniels gets a tag and tries for the Blue Thunder Driver, but Aries flips out and dives towards AJ for a tag. Styles is all business, including a springboard forearm smash to Joe! Shelley charges at AJ, but winds up taking the Styles Suplex Special for two. Now everybody starts hitting their signature moves. It’s hot and wild. Aries hits the Crucifix Bomb on Joe and calls for the 450 SPLASH, but Shelley shoves him off the top down to the floor and wipes him out with a suicide dive of his own. We get a brief AJ-Joe-Daniels reunion with some heel miscommunication. Shelley shoots in and tries to take advantage by going for the Schwein, but AJ slips away and delivers the STYLES CLASH for the three-count. (9:54) Fantastic showcase for everyone here highlighting exactly what their characters are all about. ***¾

Elsewhere, Shane Douglas speaks with the NWA world champion Rhino. Seems ironic that he would be here speaking with the NWA world champion, doesn’t it? Rhino reminds us he’s the WAR MACHINE and has the heart of a champion until Raven interrupts. He accuses Rhino of stealing his NWA world title and suggests that the old Raven is back. That brings over Director of Authority Larry Zbyszko and his team of security guards to escort Raven out of the building. Rhino wraps things up guaranteeing the Gore tonight for Jarrett. Shane Douglas’ reactions are so over the top.

Team Canada is first on Team 3D’s list for revenge. Devon and Ray get the better of Team Canada to start. Nothing too interesting happening. They go for the What’s Up Headbutt, but Roode shoves Devon off the top to send us into commercial. When we come back, Devon is *your* face in peril while Brother Ray is licking his wounds on the apron. Young and Roode set up a false tag spot, but Devon fights off a double-team and makes the hot tag to Ray. He lands a sick powerbomb on EY, but only gets two. Roode receives the alternate 3D. When they call for the REAL 3D, A-1 hops up on the apron and threatens to whack Ray with the hockey stick. Ray is so out of reach, it just looks silly. 3 Live Kru appear and yank A-1 off the apron. 3D to Young! That’ll do. (9:50 shown) Tenay exclaims that now Team 3D can scratch Team Canada off their list. Not sure this was really booked like a payback match to me, but whatever. *½

Rematch from the disastrous Ultimate X match at Bound for Glory. The winner faces AJ Styles for the X-Division title at Genesis. Everybody makes a run to climb up the scaffold to start. When everything fails and Sabin and Bentley crash and burn after a superplex, Traci tries to climb up from the floor, but Petey is there to grab her foot and sneak a peek up her dress. I’m sorry, but she is gross. Bentley saves the day and stops Sabin up top with a SUPER swinging neckbreaker. From there, Williams gets the O CANADA nut stomp in the corner. Sabin winds up putting Petey in the tree of woe for a pair of dropkicks to the mush. Still selling the neck, Sabin gets his arm yanked straight down on the top rope. Commercials! When we come back, Sabin hits the missile dropkick to knock Petey off the Ultimate X ropes. It’s not as cool of a bump as the one AJ Styles did back at Final Resolution, but it doesn’t have to be. Bentley pulls down Sabin’s arm again on the top rope to do more damage. If your arms are hurting, you can’t use them to climb the ropes. Bentley gets pulled down from the ropes for a powerbomb by Petey, but then Petey gets brought down from the top rope with a Super German Suplex by Sabin. They do a pretty goofy spot next where Bentley hanging from the Ultimate X ropes kicks Petey over who is the powerbomb position thanks to Sabin, but counters and headscissors Sabin over. Petey wants the Canadian Destroyer for Bentley, but runs into the SUPERKICK. Sabin hits the CRADLE SHOCK on Bentley and climbs the ropes, but Petey pulls him down into an inverted atomic drop and then delivers the CANADIAN DESTROYER! Bentley nearly makes it to the X when D’Amore jumps in the ring. Traci runs in and tackles D’Amore down for what Tenay calls a catfight. Meanwhile, Petey meets Bentley at the X and kicks him in the balls to send him back down to the canvas. Williams unhooks the X and has won this match. (11:13 shown) Much improved here. Another great X-Division showcase from these three. ***½

Meanwhile in the back, we catch Team Canada beating the crap out of the 3 Live Kru with hockey sticks. You mess with A-1, YOU MESS WITH ALL OF THEM.

Huge “Rhino” chants to start. Jarrett one-ups Rhino to start and struts one time too many as Rhino fights back with a press slam and calls for the GORE. Jarrett bails and we get an ECW-style fight through the crowd segment. Rhino pulls a table out from under the ring, but that just ends up fueling Jarrett. Could we see a RHINO DRIVER? Nope. Gail Kim comes out in her boob shirt and distracts Rhino. Gail Kim >>>>>>>>> Traci. Jarrett beats on Rhino and hits the Bossman straddle and then the slide and uppercut. He slows things down so that Rhino can pick the action up again. Jarrett kicks the knee and applies the FIGURE-FOUR, but Rhino’s legs are way too big and strong. When Rhino turns the hold over, Gail Kim tries a legdrop from the top rope and misses. Rhino threatens to throw Gail through that table he set up earlier, but Jarrett makes sure that doesn’t happen. Jarrett tries a couple cheap pinfalls, but can’t get the three-count. Spinebuster by Rhino gets two. Belly to Belly Suplex sets up the GORE attempt, but Jarrett steps aside. Now the ref gets wiped out. He looks DEAD, in fact. Out comes the GEETAR. Instead, GORE to Jarrett. Of course, there’s no ref. When Rhino picks up the guitar, America’s Most Wanted make their first appearance of the night and bother Rhino. Jarrett walks over and pops Rhino in the nuts. That allows AMW to hit Rhino with the DEATH SENTENCE through the table! Awesome. Jarrett happily realizes it’s over now, but gives Rhino the STROKE anyways for the three-count and his fifth NWA world title. (12:48) Planet Jarrett celebrate as they get the NWA world championship back. **½

Before we go, we catch a glimpse of Team 3D beaten down and bleeding backstage. Tenay assumes that AMW was behind this, but we’ll have to tune in next Saturday to find out!

Pretty sweet special as I think this was just as good as their PPVs at the time.