This is the premiere edition on AXS. Hiroshi Tanahashi welcomes us the program. He’s said to be a one-of-a-kind talent, but doesn’t tell us he’s the champion and face of the company, which I suppose would come across as kind of douchey. BUT WHAT ABOUT THE NOOBS WATCHING AT HOME WHO DON’T KNOW? He talks about his two biggest opponents over the last several years: Kazuchika Okada and Shinsuke Nakamura.

Your English-speaking commentators are Mauro Ranallo and former UFC heavyweight champion Josh Barnett. Ranallo might just be the new Mike Hogewood of HDNet wrestling. Where do they keep finding these guys? 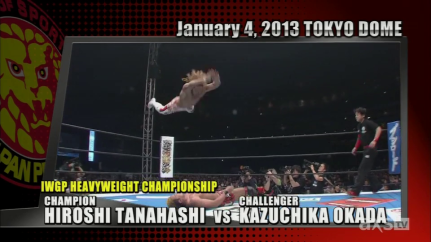 Ranallo is labeling Tanahashi as the man who resurrected puroresu. To give us some context as to what we’re watching, Ranallo calls this feud the definitive rivalry of the current generation and it’s hard to refute that comment. Headlocks and hammerlocks to start. Both guys showing off their respective poses and trying to get in the mind of the other. Once the feeling out process is over, Tanahashi goes flying and gets caught up top and brought down with a Randy Orton-style draping DDT from the top rope. Tanahashi rolls out to nurse on his neck. Okada takes Tanahashi over to the guardrail and pulls back on his neck with his head stuck in the guardrail. Back inside, Okada basement dropkicks Tanahashi and tries for the flash pin, but only gets two. Okada traps the arms and twists on Tanahashi’s neck. Ranallo calls it a submission Okada learned in Mexico. Over to the corner, Okada stomps a mudhole and walks it dry JUST LIKE STONE COLD STEVE AUSTIN, says Ranallo. Okay, guy. You can take it down a notch with the American comparisons. We get an exchange of elbow smashes in the ring. Okada tosses out Tanahashi, who skins the cat back inside and runs into a flapjack for two. Modified Deep In Debt on the mat by Okada to continue the work on the neck, but Tanahashi finds the ropes. Tanahashi comes back with a flying forearm and catches Okada charging at him with a dropkick to the knee. He chopblocks the knee real good, but Okada stands up firing off elbow smashes. Okada may win the exchange, but Tanahashi catches a kick and delivers a Dragon Screw Leg Whip to wrench the knee. To the floor, Tanahashi gets CRAZY with a flying body press onto Okada! Back in the ring, Okada avoids the Cloverleaf and gives Tanahashi a Dragon Screw Leg Whip for good measure. Another DDT stuns Tanahashi for another Deep In Debt submission. Tanahashi gets to the ropes and then brings the knees up when Okada tries a flying elbow drop. Tanahashi gets a burst of energy and heads to the top rope. Okada is there to meet him possibly for Super Heavy Rain, but Tanahashi elbows him away only to receive a nice dropkick by Okada to send him crashing on the floor.

Okada takes Tanahashi up the aisleway. Tanahashi counters a Tombstone and catches Okada running at him with the SLING BLADE on the ramp! Back to the ring, Tanahashi counters Heavy Rain with another SLING BLADE. He hits Okada with Twelve Six and goes for the HIGH FLY FLOW, but Okada brings up the knees. Tanahashi charges Okada in the corner, but gets caught and receives what Okada calls the Reverse Neckbreaker. It’s basically CIMA’s Schwein except he drops your neck on his knee. Cover, 1-2-NO! Heavy Rain scores another nearfall. Flying Elbow connects, but Tanahashi ducks the RAINMAKER. He looks for the Dragon Suplex, but settles for the Straight Jacket German Suplex, followed by the Dragon Suplex for 1-2-NO! SLING BLADE sets up the HIGH FLY FLOW for 1-2-NO! A couple more leg whips lead to the CLOVERLEAF. He even turns Okada to an angle similar to Chris Jericho’s Liontamer, which Ranallo mentions. Nevertheless, Okada barely makes the ropes before tapping out. He sees another Sling Blade coming and drills Tanahashi with the Best Dropkick in the Business. They use one another to get back up to their feet. Tanahashi ducks the Rain Maker and the following dropkick, but then Okada ducks another Sling Blade and hits Tanahashi with a dropkick on the back of the head. Tombstone connects, but Tanahashi AGAIN avoids the Rain Maker and this time hits him with another SLING BLADE. Tanahashi blocks another Tombstone and takes some elbows to the back of his head, but still manages to fire back with a dropkick to the knee and plants Okada with a Tombstone of his own. Flying Body Press by Tanahashi puts Okada directly in position for the HIGH FLY FLOW for the 1-2-3! (33:34) Great mix of ring psychology and high flying moves. Considering it’s the move that ended Tanahashi’s last reign as IWGP champ, they REALLY put over the fact that Tanahashi must avoid the Rain Maker at all costs, which was nice. A really excellent example here of modern New Japan. Apparently their match in April 2013 is even better. ****¼

They air some of the post-match press conference segments for each of the competitors. Tanahashi talks about pushing the era forward with the great match he and Okada just had.

Back to the 1980s TV studio, Hiroshi Tanahashi makes himself look babyface by telling us how inadequate he is athletically compared to his top competitors. However, he does things properly just like his mother said to do and that’s why he’s successful. Also, we learn other things like how giving up is the worst.

And with that, Tanahashi closes the show with his signature I LOVE YOU~!