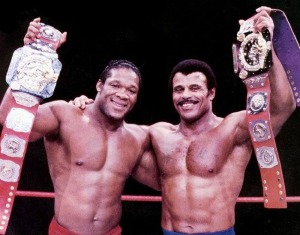 Your hosts are Vince McMahon and Pat Patterson.

These are the masked Invaders from Puerto Rico. One of them MAY or MAY NOT have stabbed Bruiser Brody to death. Anyways, one of them hits a Swanton Bomb on Dixon for the win, which is something super cool and more than likely never seen on US TV before to give them the win at 3:01.

Sheik is just a few weeks away from upsetting Bob Backlund for the WWF world title as the most unpopular wrestler in the promotion. He delivers a nasty back suplex on Jackson and submits him with the CAMEL CLUTCH at 1:42. Sheik tries to get an Iran chant going, but Allentown won’t cooperate.

Orndorff is just an AWESOME heel. Easily one of my all-time favorites. He takes forever getting his robe off, which is just old school great. The crowd is all over him. Once he gets his robe off though, he is a workhorse on Tanner. He delivers one of the best PILEDRIVERS in the business for the win at 3:36.

Easily the most competitive squash of the night as Tonga Kid really irritates the Superstar with his fast offense like dropkicks and the like. Love the Masked Spectator paper bags worn by the fans. Big back elbow turns the tide. An old lady fan sends in a question for Pat Patterson: who was the first wrestler to wear a mask? Patterson think it was the Masked Marvel. McMahon brings up the Golden Superman, but Patterson shuts him down. Tonga Kid gets one last bit of offense, but crashes and burns when he tries a crossbody out of the corner. SWINGING NECKBREAKER (Honky Tonk Man-style) gets the win at 2:57.

Time for our WWF’s Victory Corner magazine segment. Robert Debord is our host and boy is he square. He looks like Chris Cruise without the gravitas. Anyways, his guest today is Sgt. Slaughter. Pretty typical Slaughter promo. His Marine tactics in the ring aren’t only for his benefit, but also for the benefit of professional wrestling. If you can’t handle it or hang with him, you don’t belong in that ring. What he did in the USMC is also none of my or this loser Robert Debord’s business. AND THAT’S AN ORDER.

Very slow to get things going here, but the challengers are KEYED UP. The Samoans choke on Atlas and Johnson in separate corners to begin things, but they fight out and clean house like they should. After the ref gets the match settled and proper, we go to commercial. When we come back, Johnson is stuck over in the Samoans side of town. Why we got a typical heat segment in a NO-DISQUALIFICATION MATCH is beyond me. Even Pat Patterson has to make up a BS excuse for this gameplan. After Rocky fails to get away from the Samoans a few times, they really build to the hot tag until Atlas gets the go-ahead. DOUBLE NOGGIN KNOCKER on the Samoans seems to work. As Atlas swings Afa around for a slam, he knocks the ref over. Meanwhile, Johnson and Sika fall out on the floor. In comes Albano with a wooden chair. Afa grabs Atlas to get drilled, but Atlas moves and Afa gets wiped out. Great moment as Afa wears the chair around his neck. Atlas covers and the ref wakes up to count the pinfall as Atlas and Johnson secure the tag belts. (8:22) Got to love no-DQ matches booked like a regular match, right? Anyways, history is made and that’s what matters. *½

Pat Patterson interviews the new champions. Rocky Johnson is excited to be one-half of the first-ever black tag champs. Funny how WWE never really did that again until the two day reign of Men on a Mission and then again in 2012 with R-Truth and Kofi Kingston, which is a reign I had to look up because I didn’t even realize that existed. Pat Patterson is sure to get a hug from Rocky. A tearful Atlas thanks the fans for all their cheers and motivation.

Since the title match was given TV time remaining, we get this little ditty. Strongbow toils with Von Hess, but gets beaten down to the floor. Back in, he catches Von Hess with the TOMAHAWK CHOP for the win at 2:23.

NEXT WEEK: Tony Garea battles IRON MIKE Sharpe. Plus, Jimmy Snuka and the Iron Sheik will be in action.