So because the 1-2-3 Kid might not be able to be impartial because of some actions during a recent house show, Gorilla Monsoon decides to change tonight’s main event to a non-title match. Bait and switch?

Your hosts are Vince McMahon and Jerry Lawler.

We get a special rock N roll music video look at the return of Shawn Michaels.

This is the WWF in-ring debut of Ahmed Johnson. While Ahmed tears Steele apart, Shawn Michaels appears on the split-screen and says he knew he could trust Ahmed when he saw him slam Yokozuna two weeks ago on Raw. Spinebuster and the PEARL RIVER PLUNGE takes care of Steele at 2:28. Afterwards, Ahmed Johnson gets some mic time with Vince McMahon and says some things. I still don’t speak Ahmed.

WWF Champion Diesel and Bret Hart meet on the split-screen for a very special interview. Vince asks Diesel if he thinks he’s the best there is, was, and ever will be. Right now being the champion, of course he does. Vince asks Bret what he thinks about Diesel being the leader of the New Generation. He doesn’t feel like that could be a declarative statement when Diesel has never beaten him and he never really lost the WWF title back fair and square last year at Survivor Series. Bret felt the WWF title match they had at the Royal Rumble was the hardest fought match during Diesel’s title reign to date and he never received a rematch since then. Diesel speaks up and says he doesn’t recall Bret ever asking for one. That match Diesel had at WrestleMania with Shawn Michaels was tough and tells Bret not to toot his own horn here. Bret has nothing but respect for Diesel and thinks he’s been a great champion for almost a year now. He feels he’s a better wrestler though because big guys run out of steam faster and lack in the technical wrestling department. Bret feels for that reason, Diesel has been ducking the superior technical wrestlers. Diesel responds saying that Bret Hart was the first wrestler he faced after becoming champion, so how could he have been dodging technical wrestlers if the first wrestler he faced is the best technical wrestler in the WWF? After WrestleMania, Diesel did seem to face guys like Psycho Sid and Mabel throughout the summer. I believe that’s Bret’s point, but Diesel never ducked any challengers who dared to face him. Diesel’s plan at Survivor Series is the same as it has always been: go out there and beat people up. Bret plans to take this match as far as he can by wearing Diesel down. While Diesel catches onto his strategies, he’s always got new tricks up his sleeve. Vince asks Diesel what a victory over Bret Hart means to him? It’s huge because Bret is a staple here in the WWF. Diesel feels he’s bigger, stronger, and smarter than he was in January and looks to come out with the win here. After doing it all in the WWF, Vince wonders what is driving him to go after this brass ring one more time. Bret says there comes a time in life when your memories mean more than your dreams and he hasn’t reached that point yet. He felt his WWF title reign was interrupted. He got one rematch and no winner was declared. As far as he’s concerned, Diesel has been running around the WWF with his title belt, and it’s time to find out who is the best there is, the best there was, and the best there ever will be. Vince wishes them both the best at Survivor Series. AWESOME interview. I like it.

Vince McMahon versus Jerry Lawler in a game of Karate Fighters. Lawler wins and of course, he cheats. McMahon scares Lawler with the Undertaker returning to the Survivor Series. Yep.

Before the match, Undertaker vows revenge on King Mabel. Vengeance will be his. Lawler wants to see what his face looks like though. 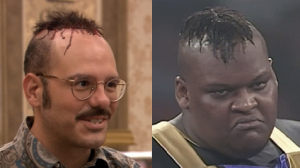 Of course, Mabel makes quick work of Raymond with an avalanche and a Belly to Belly Suplex at 3:03.

Before the next match, they take us back to Superstars this past weekend where Razor Ramon and the 1-2-3 Kid failed to win the WWF tag belts from the Smoking Gunns. The Kid didn’t like it when they got DQ’ed when Razor kept coming into the ring to take out the Gunns. Oh well.

Kid starts counting when Sid has Razor up against the ropes, so Sid tells him to SHUDDAP. Razor makes a comeback on Sid and pounds him out of the ring. Back inside, a distraction from DiBiase fails. Razor ducks a clothesline from Sid, but eats a big boot. Sid does the kip-up out of a headscissors and CHOKESLAMS Razor down. No pin attempt though. With Razor up against the ropes, DiBiase gets a shot in on the champ. Razor mounts a comeback, but tries his RAZOR’S EDGE near the ropes and takes a ride out to the floor. While DiBiase puts the boots to Razor, Dean Douglas heads down. Commercials! When we return, DiBiase and Sid discuss whether or not Ross Perot will run for POTUS again in 1996 with the Kid while Dean Douglas puts the boots to Razor. Douglas lays off and Razor makes it back inside the ring. Sid delivers a back suplex for a two count. Sid sits down on a chinlock for a while, but Razor stands up and electric chair drops Sid on his neck. Ouch. Sid charges into a boot in the corner and takes the bulldog out of the corner for two. Time for the RAZOR’S EDGE, but the 1-2-3 Kid pulls Sid down off his shoulders! That allows Sid to kick and POWERBOMB Razor down. Cover and the fast count from the Kid gets the victory. (9:50 shown) Can’t say anyone could be surprised by that finish. Sid as IC champion would have been interesting. It makes you wonder if that really was the plan before they changed it at the last minute. Afterwards, DiBiase stuffs a $50 dollar bill in Razor’s mouth and the Kid picks it back up and puts it in his pocket when Ted turns away. *½

So the 1-2-3 Kid has taken the bribe and finally joined the MDC. WHAT DOES THAT MEAN FOR SURVIVOR SERIES?!

In the back, Jim Ross meets with Camp Cornette and Dean Douglas. Razor Ramon interrupts the proceedings and comes after Douglas. We’ll see you next week.

NEXT WEEK: Nothing announced.