Tonight we look at the final three matches to close out the fifth night of the G1 Climax 24 round-robin tournament.

Your hosts are Mauro Ranallo and Frank Shamrock. This is the first episode of the AXS series without Josh Barnett. 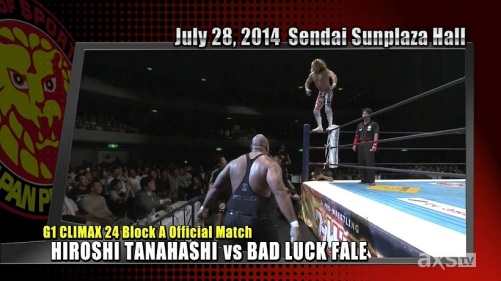 Tanahashi looking to pick up two more points after losing to Shibata on night four. Fale overpowers Tanahashi to start only for Tanahashi to take him to the mat with a drop toehold. He puts the boots to Fale, but Fale rolls out and pulls out Tanahashi to prevent a pescado. Fale whips Tanahashi into the guardrail and yells at Gedo and Jado who are doing commentary. JIP ahead to a GRENADE attempt, but Tanahashi avoids the move and takes Fale to the floor for a flying bodypress! Back inside, Tanahashi delivers the Sling Blade. Time for the HIGH FLY FLOW, but he flies down to be goozled for the GRENADE for 1-2-NO! Fale has to give Tanahashi a Samoan drop for the BAD LUCK FALL to work, but it does work and gives Fale two more points as he picks up a pinfall. (6:06 shown) So he bumps off Nakamura and wins the IC title in June and defeats Tanahashi in July. It’s quite the summer for this man. We get basically half the match here. I think we got enough to rate. If I saw the whole thing, I could feel differently. **½ 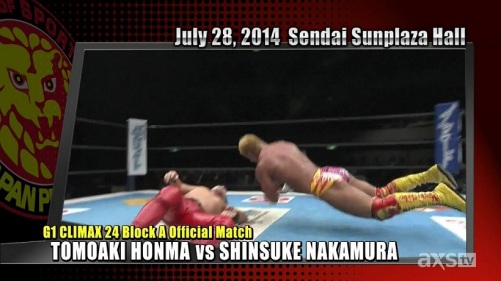 Tentative start to this one. Honma of course tries and misses the falling headbutt. Nakamura fires back with a knee on the apron and a diving knee to the back of the head. Back inside, we JIP ahead to more knee drops from Nakamura. Honma comes back with clotheslines and finally lands the falling headbutt for two. Nakamura hits Honma with head kicks and puts him in the corner for the running knee. As we JIP ahead again, Honma escapes a front headlock and drops Nakamura with a DDT. Rolling blockbuster from Honma leads to a nasty piledriver for 1-2-NO! Nakamura avoids the Bernard Driver and clamps on the sleeperhold. He turns it into a backcracker and delivers the Reverse Powerslam. Honma sees the Boma Ye coming and headbutts Nakamura down. Brainbuster by Honma gets 1-2-NO! KOKESHI misses. Nakamura wins a slugfest in the middle of the ring and calls for the Boma Ye, but Honma counters to a rollup. He can’t get the backslide he likes to use, so Nakamura kicks him down for the first BOMA YE for 1-2-NO! Honma shows some FIGHTING SPIRIT and stands up only to take another BOMA YE for the three-count. (9:24 shown) They shaved off about a minute here. Ultimately, Honma is going to have to win at some point, and I wonder if we will like who it will be against. Almost like a Reader’s Digest version of every Nakamura match. ***¼ 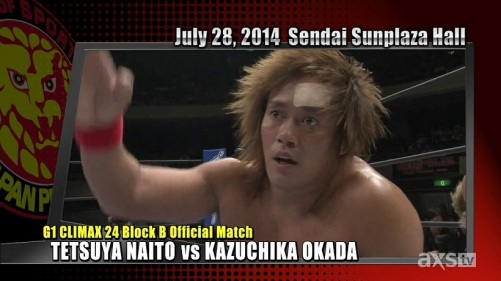 Rematch from Wrestle Kingdom 8. Wristlocks and hammerlocks to start. Naito rolls through a monkey flip and catches Okada with a dropkick. Okada fights out of a chinlock and drills a few forearms into Naito before sitting him on the top buckle for the standing dropkick. VINTAGE OKADA! He crimps Naito’s neck in the guardrail before returning to the ring. Back in, he hits the Hilo for two. After they trade some blows, Okada lands the sliding dropkick and DDTs Naito for another nearfall. Nobody can make a charge work in the corner, but Naito manages a reverse neckbreaker. He follows up with a sliding dropkick and a senton bomb to set up a missile dropkick. Naito wants that series of dropkicks down in the corner, but Okada sees it coming and delivers the Reverse Neckbreaker to stun Naito. Flying Elbow connects and Okada calls for the RAIN MAKER. Ranallo recalls a time when Randy Savage and Frank Shamrock worked together. They don’t elaborate, but it was on an episode of WALKER TEXAS RANGER in late 1999. Anyways, Naito avoids the Rain Maker and delivers a tornado DDT. He gets the corner dropkicks and hurracanranas Okada. There’s the High Angle German Suplex on Okada for 1-2-NO! Okada prevents Gloria from happening and catches Naito with a standing dropkick to the back of his head. Tombstone connects and it’s Rain Maker time, but Naito ducks. He lands an enziguri kick followed by a release dragon suplex to Okada! They trade forearms, but Naito wins the battle with a Flying Forearm. Naito is on the run again, but Okada catches him with another standing dropkick. Rain Maker is ducked again as Naito lands a Uranage suplex! Buzzsaw kick puts Okada in position for the STARDUST PRESS as Naito gets the 1-2-3. (13:54) Probably one of Naito’s better performances since WK8. As for Okada, he seemed game to take Naito’s offense, but didn’t seem to do a whole lot else. ***¾

NEXT WEEK: Day #7 of the G1 Climax 24 tournament, which was the WON major show of the year for 2014. Yes – we will get to see Styles versus Suzuki. Meltzer says they are all ****+ matches, so we will have to wait and see if that is accurate. I’m sorry, but Meltzer is losing it these days. New Japan could fart and he would give it ****. Just saying.