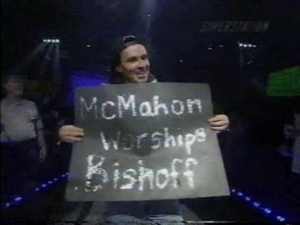 Your hosts are Tony Schiavone, Bobby Heenan, and Lee Marshall. I think Baton Rouge is chanting for Larry Z, but sorry everybody. He’s not on the show.

The Giant comes down to the ring totally random and unannounced. He’s feeling froggy tonight because he challenges the ENTIRE NEW WORLD ORDER. Randy Savage and Elizabeth meet the Giant to encourage him, but not looking to help him or anything. Savage hopes the Giant rips Hollywood Hogan apart so he can finish him off for good at UnCeNSoReD in the cage match to clear him a path straight to the WCW world title. Well, the world champ Sting appears because he certainly has something to add to that comment. It is not *the* title, it is STING’S title. Sounds like they want a match. Sting versus Savage for the WCW world title in the main event – TONIGHT.

YES! More Brad Armstrong. Raven responds to the Armstrong Curse t-shirt and how Brad’s career started out strong, but has descended into mediocrity ever since becoming rookie of the year in 1980. Saturn appears beside Raven in the ring. Raven seems to blame Bullet Bob for Brad’s shortcomings and suggests Brad give in to his anger and frustration. As Brad starts to contemplate, Raven gives him the EVENFLOW DDT as the bell sounds for the three-count in like five seconds. Well that’s unfortunate.

Tony Schiavone is being Mike Tenay tonight and welcomes out the WCW cruiserweight champion Chris Jericho for an interview. Like on Nitro, Jericho is wearing Juventud Guerrera’s mask. Since Jericho is feeling so good, that he doesn’t want to wait until Sunday night to face Dean Malenko. He says he’ll put the cruiserweight title up tonight! Jericho says when he beats Malenko tonight with the Texas Cloverleaf, he demands Malenko change the name of the hold to the Canadian Jericho Leaf. All the Jericholics know that Dean Malenko will never EVER beat him for the cruiserweight belt again. Did he beat you a first time?

Gotta bring out Duggan for all those old Mid-South fans here in Baton Rouge. I love how Tony is doing the French pronunciation of the town. Windham gets heat on Duggan for a while, but Duggan fires back with clotheslines, the Three Point Stance, and the OLD GLORY knee drop for the win in 3:16.

WCW Saturday Night! Watch it – IF YOU WILL! 6:05PM eastern time! TBS! The Awesome Bill Goldberg will be in action, Dean Malenko and Chris Benoit team up to face some ham-and-eggers, and Davey Boy Smith joins Jim Neidhart to face Curt Hennig and Brian Adams from the nWo! It’s the MUTHASHIP! Take it to the PAY WINDAH, baby!

No time to cabbage page tonight, pal. This starts as a standard squash for Steiner, but then he grabs a bearhug to allow Grunge to fight out and get a little bit of offense. Steiner ends up giving him a forearm shot off the apron to put him through his own table. Going through tables is all Grunge has! STEINER RECLINER gets the win 5:04. ¾*

Tony Schiavone brings out Eddie Guerrero to have a talk. Mike Tenay has joined us at the commentary table. He doesn’t have much to say about facing the TV champ Booker T at UnCeNSoReD and would rather talk about how his nephew Chavo Guerrero Jr. failed to beat Booker T last week on Nitro. The Guerrero name has been completely disgraced! Chavo comes out to talk to his uncle face to face. Eddie says violence hasn’t seemed to fix whatever problem Chavo being the family loser so he challenges Chavo to a match tonight. If and when he wins, Chavo has to do everything Eddie tells him to do so Chavo will stop being a loser and finally become a winner. Chavo says if he wins, Eddie has to stop being a dick all the time. Well, here we go. Eddie didn’t mean to have the match now, but Chavo wants his uncle Eddie – NOW.

Tenay announces that Dean Malenko has accepted Chris Jericho’s challenge for tonight. They trade blows to start and Chavo delivers a huge backdrop to Eddie. Eddie fires back with a European uppercut and snapmares Chavo over to step on his face. Chavo gets thrown over the top, but skins the cat and headscissors Eddie to the floor. Chavo takes out Eddie with a somersault plancha. Back in, Chavo fights off a top rope headscissors and drills his uncle with a flying TORNADO DDT! Awesome. Cover, 1-2-NO! Eddie grabs the bottom rope to stop the pin. Before he can capitalize, Eddie low blows his own nephew and delivers the Brainbuster to set up the FROG SPLASH for the win. (2:01) If you can find a better two minute match, I’d like to see it. Eddie tells the camera that it’s *his* way now, Chavo. **½

Hollywood Hogan, Scott Hall, and Eric Bischoff head down to the ring. Bischoff calls the Giant MEGA-dumb. Hogan can’t wait for the whole nWo to beat up the Giant tonight. It’ll be like Thanksgiving with everybody getting their piece of the big guy. Over to Hall, hey yo. He didn’t think it was possible, but Giant now is as dumb as he looks. Hall can’t believe that Sting and Randy Savage are facing each other tonight as well. Things couldn’t be working out better for the nWo! Wait, let’s look at this kayfabe wise. If Savage was to win the world title tonight, Hall would no longer have a title shot at UnCeNSoReD. Shouldn’t Hall be pissed and not at all excited about seeing this match tonight? Because if Savage wins, Hogan gets a title match in the cage. Oh boy. Hogan finishes saying he will get rid of the usual suspects 4-LIFE.

Konnan gets some time working with a luchadore three days before UnCeNSoReD when he faces Juventud Guerrera. He doesn’t really have an answer for Lizmark to start. Konnan does manage a German suplex, but Lizmark bridges up off the mat to avoid the pinfall. Quebrada on Konnan gets 1-2-NO! Before Lizmark can do anything more, Konnan hits him with the 187 and the TEQUILA SUNRISE for the tapout in 1:59. After the bell, Konnan unsuccessfully tries to unmask Lizmark when Juventud Guerrera appears and springboard dropkicks him to the floor. NEVER SURRENDER~! While Guerrera checks on Lizmark, Konnan pearls harbors him and gives Juventud a modified Muscle Buster. ARIBA LA RAZA~!

Curt Hennig and Rick Rude come out to talk to Tony Schiavone. Hennig is wearing the black on white nWo t-shirt which looks really cool. It definitely makes his tan pop. Anywho, Rick Rude says at first he was all about receiving a bounty placed on Bret Hart’s head by some chumps up in Connecticut, but realized it wasn’t about money anymore to him. It’s really about self-gratification. It was about Rick Rude getting to hang out with his lifelong friend Curt Hennig. When Hollywood Hogan told his new World order buddies that Bret Hart needs to eliminated, Curt says he was the first man to step up to the plate. Hennig says we’ll see one of the best wrestling matches of all-time at UnCeNSoReD. Bret is a good wrestler, but there’s a big difference between being good and being GREAT. When Hennig and Rude are together, they have never lost a fight. Rude says that next week on Nitro, WCW will be HART-less. He has purchased a round trip ticket to hades and back with Bret’s name on it. Rude says he bets they can make Bret sweat. Well, that got weird real quick.

Because these matches were so good 3-4 months ago. Tony mentions the Norfolk Nitro again set for April 27 as a big deal. Saturn just destroys Disco. Lodi even gets his licks in, but at least Disco drills him with a clothesline. Back inside, Saturn throws Disco around some more. Disco gets a few quick nearfalls, but he can’t do his Chartbuster finisher anymore now that the Disciple is doing it. He hits the spinebuster and the swinging neckbreaker on Saturn, but still can’t secure the three-count. Saturn fires back with the head and arm suplex before locking in the RINGS OF SATURN for the win. (4:04) Well, that’s that. ¾*

It’s INDEED a handicap match. No Kevin Nash yet. I love watching Scott Hall, but why is he the first guy to face the Giant with a world title match in three days? He gets owned. Next is Curt Hennig. He gets owned. Konnan rushes the Giant and gets pounded. In comes Hollywood Hogan, but he takes a headbutt. Giant takes out Steiner, Norton, Vincent, and Adams one by one. Giant grabs the legal man Konnan and POWERBOMBS him for the DQ. (1:30) The nWo clear out demanding Doug Dellinger arrest that man. Forget the handcuffs, they chain his wrists together. Kevin Nash walks out with a cup of coffee and laughs at the Giant on his way to the paddy wagon before throwing the cup of coffee in his face. Giant NO-SELLS and gets SUPER angry as he BREAKS THE CHAINS tied to his wrists! He chases Nash backstage as security tries to stop him.

Okay, that was actually pretty cool.

Wearing the Juventud Guerrera mask and a Rey Mysterio t-shirt, Chris Jericho attacks Malenko during his entrance. In the ring, a suplex and the C’MON BABY cover gets two. Crowd chants that Jericho sucks. Malenko fires back with the flying shin kick and pulls Jericho into a back suplex when he tries to bail. TEXAS CLOVERLEAF! Jericho taps! (2:09) We’ve got a NEW champion? Malenko continues to pound on Jericho after winning the title, but then pulls the mask off to reveal its LENNY LANE? BRILLIANT. The real Jericho comes out and blindsides Malenko with another title belt. Lenny Lane gets whacked as well. He puts Malenko in the Liontamer as we take a commercial break. This was a much more effective angle than the one the WWF had just done recently with Goldust as Triple H as Lane definitely resembled Jericho until you saw him wrestle. ¾*

Norton BUM RUSHES THE SHOW and avalanches Luger to start. Some ringside brawling ensues. Norton brings Lex back inside for a jumping shoulder block for two. Flying clothesline gets a nearfall as well. Luger comes back with a pair of clotheslines and the Bionic Forearm before he threatens to TORTURE RACK Norton when Scott Steiner attacks him for the DQ at 1:52. Rick Steiner (and Ted DiBiase who adds nothing) comes down to help Lex Luger clean house on Norton and Scott Steiner.

They punch back and forth until Sting hotshots Savage and locks in the SCORPION DEATHLOCK with his back towards the entrance ramp. Not smart. Scott Hall comes out and kicks Sting in the back of the head for the DQ at 1:42. Hollywood Hogan saunters down to get at Savage, but he’s quickly punched away. Since Savage is helping out Sting, he helps get rid of Hall. Hogan calls out for more troops as Curt Hennig and Brian Adams head down, but they are useless against Savage and Sting. When the Disciple appears, Sting decides to strap he and Savage to the zip line thing and they head straight up into the rafters to close out the show. Sting is so Batman. N/R

UnCeNSoReD is next! Until then, so long for now. 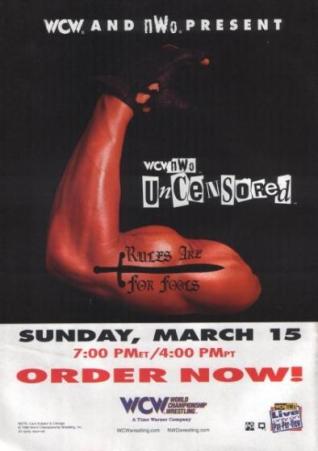