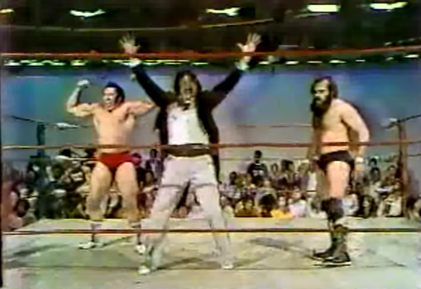 They take us back to the Mid-South Coliseum from March 16 when the Blonde Bombers battled Ricky and Robert Gibson in the Bombers return match to the area after escaping the Gulas territory. Robert is getting his teeth kicked in and his chin locked by Latham and Ferris. When the match finally falls apart, manager Sgt. Danny Davis flies in and hits Latham by mistake with his helmet. While Robert is getting the pinfall, Ricky uses Robert’s back like a trampoline and dropkicks Danny Davis away. Awesome.

Time for some Louisville Gardens promos on Tuesday night. In the main event, there will be a 2/3 falls match between Jimmy Valiant, Ken Lucas, and Billy Robinson against Paul Ellering, Sheik Ali Hassan, and Jimmy Hart. Lucas and Robinson vow revenge on these guys, but no Jimmy Valiant today.

They set up a nice little fiery comeback for Morton as he’s nearly pinned after a big splash and an elbow drop. Morton sunset flips Oswald out of nowhere and gets the pinfall in 3:04.

Russell remarks how tall Upton is compared to Dundee. Upton gets owned to start with headlocks and such. Dundee switches over to do a little arm work. Upton finally uses his size advantage to pound on Dundee and gives him a big slam. When he picks up Dundee for a second slam, Dundee counters with an inside cradle that turns ugly. Dundee sends Upton into the ropes and gives him a good elbow shot to gain the three-count at 2:45.

Dr. D Dave Schultz and Dennis Condrey stop by to talk themselves up. They are complaining they don’t receive title shots because they were told they are “too violent”. They claim Dundee and Valiant hang around Jerry Jarrett all the time which is why they get all the attention. Schultz calls out Valiant saying he’s got 29 cent sunglasses and that he’s just a “punk from the Big Apple”. This is fantastic. They tell all the stooges in Memphis to keep listening to them.

Once Schultz and Condrey leave, Russell shows us the Billy Robinson and Ken Lucas match where they lost the tag titles to Paul Ellering and Sheik Ali Hassan in the Louisville Gardens a few weeks back. This clip also includes the Jimmy Valiant ring clearing save after the bell for Lucas and Robinson.

Lance Russell hypes up the next Louisville Gardens card again.

FIRST FALL: The rest of the show will be devoted to this match. Lucas and Valiant take turns beating up Hassan to start. Nothing I would call wrestling. Just a bunch of bops on the head. Tag to Ellering, it’s more of the same. Lucas ends up getting stuck on the wrong side of town to turn the tide. This continues for the next several minutes setting up a tag to Valiant. He punches on the heels and brings their heads together. Jimmy Hart gets nailed. Next thing we know with the ref Jerry Calhoun’s back turned, Ellering whacks Valiant in the back of the head with Jimmy Hart’s cane and covers him for the three-count in 7:45.

SECOND FALL: Valiant is ready to nail somebody with a chair before this gets going. Ellering gets flipped into the ring to start the second fall. Jimmy is too hot right now and that forces Ellering to tag out. JIMMY VALIANT – SO HOT RIGHT NOW. He goes after Jimmy Hart leaving Lucas in the ring to be double-teamed. When Valiant gets close to Hart, Hart sprays something green all over his face. (13:36 total) That’s a DQ and should finish the match.

Superstar Bill Dundee and Rick Morton come out to help Lucas with Jimmy Valiant. Of course, Valiant is selling it like he just got heavily maced. Ellering and Hassan remain inside the ring with Jimmy Hart and look real pleased with themselves. When did Jimmy Hart become the Great Muta? Valiant staggers back to the dressing room hoping to get his eyes flushed.

Back to more Louisville Gardens promos. Russell speaks with Jimmy Hart, Sheik Ali Hassan, and Paul Ellering after the incident. Hart is sorry for what he did to Valiant – sorry he didn’t put out Valiant forever. Lucas is NEXT! Ellering finds it sad to see two grown men cry. He is the best conditioned athlete in the business. Valiant’s idea of a workout is getting a sun tan. NICE.

Russell and Brown wrap up the show for another week and we are outta here.