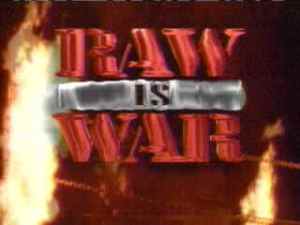 TIME TO GET RAW! Your hosts are Jim Ross and Jerry Lawler.

Whoa we start off RAW with a match! Jarrett catches Edge early and Southern Justice show up with a guitar. Edge hits a weak enziguri, but runs into a powerslam for two. Edge hits a Northern Lights suplex, but Canterbury grabs his foot as he’s coming off the ropes and Jarrett clotheslines Edge to the floor. Edge punches Jarrett back into the ring and delivers a flying body press for two. Jarrett comes back with the Stroke, but it’s just a transition move here. He hits a DDT as well. Edge avoids a dropkick and catapults Jarrett into the corner for a nearfall. Lawler discusses Edge’s issues with Gangrel which are unclear. Jarrett delivers a vertical suplex for another two-count. Edge comes back with rolling suplexes ending with a sitout suplex. Canterbury gets knocked off the apron by Edge while Knight slides the guitar into the ring. Jarrett grabs the guitar and KABONGS Edge for the DQ. (5:15) Eat your heart out, Mark McGwire. Knight leaves a Southern Justice business card on Edge’s chest. *

Ross says Droz shouldn’t be in the ring since he’s injured with a torn left bicep. Bradshaw is also still licking his wounds from the Brawl for All finals. He gets a back suplex on Droz for two. They head to the floor for some ringside violence. Still in control as they head back inside, Bradshaw hits a corner clothesline. Droz catches Bradshaw with a jumping shoulderblock and a clothesline of his own. He continues his flurry of offense with a jumping back elbow, but Bradshaw backdrops a powerbomb and boots him down. Droz ducks the CLOTHESLINE FROM HELL and DDTs Bradshaw for two. Three Point Stance clothesline gets another nearfall. Over in the corner, Bradshaw decides to take the easy way out and trips up Droz for the Ric Flair corner pin to get the cheap win. (4:01) While Droz argues with ref Jack Doan, Bradshaw destroys Droz with the CLOTHESLINE FROM HELL. ½*

We get a video package to show us how the main event for In Your House: Breakdown scheduled for September 27 (Austin v. Taker v. Kane) came about.

Ross tells us we’ll be seeing some “Sable highlights” from her matches at WrestleMania XIV and SummerSlam. Mero gets distracted by the Sable chants to start as Perez is in charge. Jackie gets Mero back on track and distracts Perez. Mero hits a corner clothesline and catches Perez with a running knee lift. He then telegraphs a backdrop and Perez goes DROPKICK CRAZY. A standing moonsault from Perez gets two. There’s a DDT for another nearfall. Next thing you know, Mero pulls Perez into the TKO for the win. (3:39) Ross thinks Sable might issue a challenge to Jacqueline tomorrow night on Sunday Night Heat. ½*

Michael Cole checks in with the Oddities and the Insane Clown Posse. Looks like Golga farted. Luna says the Oddities aren’t just a bunch of pretty faces. Violent J cuts a decent promo against the DOA.

Kurrgan boots down 8-Ball and tags in Golga. Together, Kurrgan and Golga run down 8-Ball. Golga puts a Cartman doll at the commentary table and puts Lawler’s crown on it. Ross asks Lawler if it reminds him of little Brian. Golga breaks the top rope and misses the Golga Splash. In comes Skull, he uses the top rope against Golga. The Insane Clown Posse have enough and hit the ring for the DQ. (1:54) Shaggy 2 Dope takes a powerbomb while 8-Ball beats on Violent J at ringside. THE CLOWNS ARE DOWN. Since the damage is done, there’s not much left for the Oddities to do about it. The DOA get on their bikes and ride off. The crowd is chanting for “ICP” to end the segment. ¼*

WWF REWIND: Last RAW Saturday Night, 9/5/98. D’Lo Brown leaves the Rock behind with the Undertaker and Kane to take a chokeslam.

ENTER THE WARZONE! Your hosts are Jim Ross and Jerry Lawler.

Here comes the Rock to the ring. He first wants to talk about the ladder match with Triple H at SummerSlam. He did exactly what he said he was going to do to Triple H. Although Triple H is now the IC champ, the Rock realized he will always be the People’s Champ. Moving on, the Rock is mad at the Undertaker and Kane for not knowing their roles. He knew he was going to get his ass whooped last week, but Kane won’t get away with it and the Rock will take his big right hand, raise the People’s Eyebrow, and lay the smackdown on Kane’s candy ass if you smell what the Rock is cookin’.

They take us back to SummerSlam to see the entire Lion’s Den match between Owen Hart and Ken Shamrock. I do like that finish.

No guitar in sight. Canterbury and Knight rush Too Much to start. Christopher does the 1990s flippy-doo to get the hiptoss on Knight. He continues to armdrag Knight around, but then tags out to Taylor. In comes Canterbury, he throws Taylor around and drills him with a lariat. Christopher catches Canterbury from behind on the apron. He tags in and helps Taylor hit a double suplex. Doesn’t bother Canterbury too much as he catches Christopher in mid-air and slams him down. Southern Justice gets some heat on Christopher to set up the tag to Taylor. He goes DROPKICK CRAZY with even Christopher joining in on the fun. Christopher misses a charge on Knight and goes flying to the floor. Meanwhile, Canterbury hits the PROBLEM SOLVER (Slop Drop) on Taylor for the win. (4:06) There was a flurry from Too Much, but oddly enough, it just wasn’t enough. *½

Dustin is still adamant that “He Is Coming Back”. We see clips of Bradshaw and Vader brawling over the past few weeks. After the bell sounds, Val Venis is spotted going through the crowd with a sign that reads “I Have Come”. HE’S EJACULATED BEFORE LAWL. I could watch Runnels and Vader go 15-20 minutes. I always enjoyed their matches in WCW. They brawl out to ringside as Vader takes a ride into the steps. Back in, Runnels seems mad at himself for getting “violent”. Vader takes advantage by running Runnels down for two. Runnels punches back on Vader, but gets distracted by Val. Vader manhandles Runnels and avalanches him for a Vader Bomb for the three-count. (3:24) Hey, where’d Val run off to?

Al Snow appears from the crowd and gets in the ring. Lots of mannequin heads were handed out. Everybody loves Head! They decided they won’t leave the ring until they meet with a WWF official – preferably one with a pulse. Well, yeah. Commissioner Slaughter, Pat Patterson, and Gerald Brisco come down to kick Al Snow and Head out of the ring. Snow makes fun of them and claims Head is the new WWF commissioner, but Slaughter won’t stand for Snow’s behavior. Brisco and Patterson get interrupted by Snow when they threaten him with jailtime. Snow takes Head and smashes Patterson in the nuts with him before storming off and back through the crowd. The people love this as you can imagine.

Michael Cole talks with the Headbangers backstage. They make light of the fact they are seen as Shotgun Saturday Night-level talent and not Raw is War-level talent now. Headbangers decide they will just beat the hell out of both Mark Henry and D’Lo Brown.

D’Lo and Mosh start us off with headlocks and shoulderblocks. Mosh starts leapfrogging D’Lo, but winds up sunset flipping him for two. Mosh catches him with an armdrag and armbar. Tag to Thrasher, he and Mosh deliver a double flapjack for another two-count. D’Lo goes to the eyes and tags Mark Henry. He catches Thrasher, but Mosh missile dropkicks them over for two. Thrasher wants a suplex on Henry for some reason and Mosh helps out with getting the suplex done. Mosh tags in for the old Anderson brothers finish. Henry comes back with a gorilla press slam. D’Lo tags in and hits the standing leg drop followed by the flying elbow drop. Running Ligerbomb gets two. Tag to Henry, he hits his elbow drop off the ropes for another nearfall. Mosh finds a tilt-a-whirl headscissors and runs down D’Lo to hot tag Thrasher. The match breaks down as D’Lo and Henry are thrown into each other. To the floor they go, Thrasher and Mosh double-team D’Lo while Chyna hits the ring and jumps Mark Henry for the DQ. (5:23) Chyna fights off the refs and won’t let up on Henry until the New Age Outlaws and Triple H pull her back. SUCK IT, MARK HENRY. Dull match overall. ¾*

Triple H reminds us DX went 3-0 at SummerSlam and regained the WWF IC and world tag team titles. We’ve now seen every WWF champion tonight except for Stone Cold Steve Austin who suffered an injury at SummerSlam. Something tells me this won’t last long. TAKA knocks Road Dogg around to start, but Gunn nails him coming off the ropes as he falls facedown for the Shaky Knee Drop. Tag to Gunn, Funaki gets backed into the corner and rakes Gunn across the face. Nevertheless, Gunn goes PRESS SLAM CRAZY on Kaientai. Triple H tags in – still wearing his hat – and kicks away at Men’s Teioh. He telegraphs a backdrop, but so does Teioh as Triple H hits him with the Facebuster. Triple chops some bare skin over in the corner. There’s the High Knee. Road Dogg tags in, but takes a dropkick to the knee. Togo and Funaki double-team Road Dogg as the rest of Kaientai come into the ring for the elbow drop train to Road Dogg. CHOPPY CHOPPY YOUR PEE-PEE. Kaientai continues to double-team Road Dogg as Togo gets a nearfall from a flying splash. Road Dogg avoids a corner charge from Togo and runs down TAKA. Hot tag to X-Pac, he even looks like the power guy against Kaientai. X-Pac lands the Bronco Buster on TAKA as the match breaks down. The Outlaws then launch the Light Heavyweight champ TAKA into an X-FACTOR for the three-count. (4:33) Still feeling froggy from her beatdown of Mark Henry, Chyna forearms Yamaguchi-san off the apron. They didn’t beat Kaientai into powder, but there was no way they were winning this one. A better version of what you’re seeing here would be TAKA going one-on-one with Triple H on RAW in April 2000. Still, a fun glorified squash here. DX gets some chick to show her ass to close the show. **

That’s going to do it for tonight. Where was the Sable footage? I think I can say this without doing any digging that this was in fact the WORST RAW of 1998. If you disagree, change my mind. SUNDAY NIGHT HEAT IS NEXT!